And now we go to the studio… 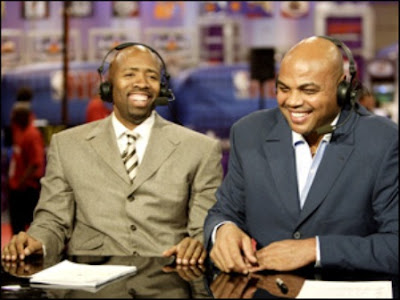 "Did you see how bad he sucked Charles?"


That’s what Charles Barkley would say about my race last night. Well, at least Frank Caliendo doing his impression of Charles Barkley. That’s all I can think about when people ask me how I did. I ended up dropping to 11th overall after missing the race at the U.S. National Whitewater Center, so I had extra pressure to get back into the top ten.

I think it all started when I left work yesterday. I got out a little early thinking I had plenty of time to get to Renaissance, since it’s pretty close to work. The rush-hour traffic however, was in full effect. I ended up at Renni at around 5:50, which left me with very little time to change clothes, register, and warm up. I spun around the parking lot for a bit to get the blood flowing, and headed over to the pre race briefing. I found my arch rivals, Patrick and Doug, and they seemed pretty worn out. In fact, everyone seemed a little worn out from the previous night’s race. I figured that would help me, so I mentally prepared myself for a good race. We headed down to the bottom of the hill to start the race.

I waited for the signal, and then I took off up the hill. I entered the single track in a pretty good position, and we really hauled some serious booty down the trail. I was directly behind Doug, and I waited for an opportunity to pass him. Just as I was about to call out the pass, he went down hard. I was right on his rear wheel, and I nearly ran over him. After swerving in the nick of time, I continued on my way. I narrowly avoided a major setback.

Everyone behind me did the same, so I had no room for error. I stepped it up so I could gain a little cushion on the rest of the pack. It worked for a little while, but suddenly something felt wrong. It was different than my usual mid-race fatigue. I could hardly catch my breath, and my lungs felt like they were on fire. I’ve never felt that pain during a race. I tried my best to continue my pace, but the pain was almost unbearable. I immediately saw Patrick right behind me, ready to pass. I motioned for him to go around, and I thought I would let him pull me for a while. I just couldn’t maintain my pace though. Another rider passed me, then another. I backed off a bit to recover, and lost another place. I started on the long climb to the parking lot, and I barely made it up that hill. If I was the type to quit a race, I would have right then and there. I seriously felt like I could not go on, but I did anyway.

As I rode through the parking lot headed towards the next section of trail, my only thought was to finish the race. However, I still had a long way to go. As I entered the trail, I heard a spectator shout, “Go man, pick it up!” I used his words, along with a nice steady downhill section, to recover a bit. I started to feel a little better, but I feared it was too late. My lungs were still burning, but I was able to pick it up a notch. I passed two riders from my class, so that built up my confidence.

I exited the trail headed for the finish line, shifted to the big ring and hammered away. I ended up with a whopping 15th place finish. The good news is I finished ahead of Doug, who is leading me in the overall standings for now. I still have three more races to get back on track, so that’s a plus.

After a post-race self-assessment, I realized that my run-down feeling, wasn’t due to over training. I had, in fact, been fighting off a cold the past week or so, and I was too stubborn to admit it. Little Miss Sunshine even noticed that I felt warm, possibly from a fever. So, I guess that means I will rest for a day or two, then get back on the road bike for some training miles. I guess I still have a lot to learn.

In unrelated news, I got an update from the Dirty Party Cycle. He has received no communication from the perpetrators of the Great Brake Fiasco since his last lovely chat with them. He is losing hope that his new replacement brake will arrive as planned. Hopefully he can call them today and find out what’s going on. He may have to break out the big guns. I hope not, for their sake.