Since I caved into peer pressure and signed up for a second race on Sunday, I had no choice. I grabbed my single speed bike and set out to “race” with the rest of the crazies with one gear. As long as you do at least one lap, you can’t DNF. My goal was to do two laps before I died out there.

Lots of people said I was crazy for going back out there, but I saw it as extra training. Besides, a lot of people do more than one race at this event. I wasn’t special, but yeah, maybe I was crazy. I’m still pretty new to this single speed thing, but this is the best way I know to get better at it. We took off from the start line and I was somewhere in the middle of the pack, and I knew I would be good for most of the first lap since it was mostly downhill. Somehow though, I felt like I had been there before. 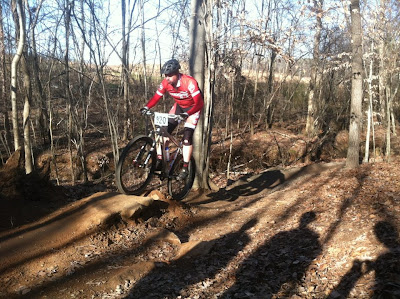 Yes, the usual crowd of hecklers still occupied the rock jump thingy, and I was glad to see them. In fact, they would keep me going throughout the race. Although there was a climb right after that spot, I knew I was near the end of each lap. I really appreciated their cheers and other nonsense (including the rogue trail work.)


That first climb wasn’t so bad, but I started to wonder if running a 32X18 for my second race of the day was a good idea. I knew it would wear me down as the race went on, but I only planned on being able to complete three laps anyway. Lap one was in the books, and I wasn’t in last place for some reason.


I sprinted past the finish line, putting on my best “It doesn’t hurt” face. Back in the woods, it was more downhill action. I felt fine so far, and I couldn’t wait to see the rock jump heckler crowd again. After another leg burning climb, I had lap two done. I was loosening up a bit, but I knew I wouldn’t be able to keep going for the whole race. I still enjoyed the berms out there though. 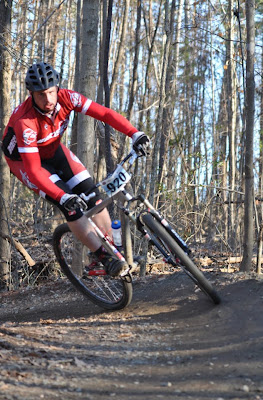 
I had no idea how much time had passed, but after climbing out again I had met my goal of three laps. For some reason though, I didn’t want to stop. As I passed the start/finish line again, the cheers must have motivated me to keep going. I decided that I would ride until either the race ended or I fell over from exhaustion, either of which would be a “good enough” effort. I still felt kinda okay, so why the hell not? 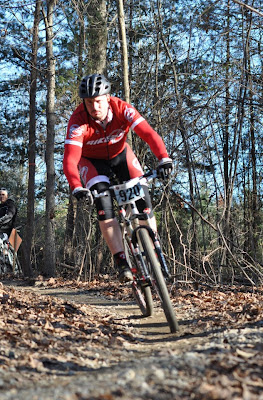 I don’t remember much about the rest of the race, other than getting lapped a couple of times by the leaders. I had no computer on my bike and no watch, so I had no idea how far I’d gone or how much time was left. I didn’t have anything to strive for, other than riding until it was over. When I was in the singletrack, I heard the announcer say, “One lap to go!” I was almost finished.


The final climb was painful, but I made it without walking. I even had enough energy to sprint for the finish with another guy in my class, but I’m not sure if I beat him there or not. It didn’t matter, because I went way past my goal of three laps. I ended up with eight for that single speed race, placing 19th out of 22. Not only did I finish, but I did it ahead of some people (who probably didn’t race earlier in the day.)


I was tired, but happy. This “training” thing is pretty fun because well, it didn’t feel like training. Now that I know I can do it, I’ll probably race both races for the rest of the series. I just have to make sure I eat more food and drink plenty of beer afterwards. That’s why I do this shit anyway.
Posted by TheMutt at 8:32 AM