So I promised an explanation as to why I skipped out on one of my favorite races of the year, the 6 Hours of Warrior Creek.  First though, I’ll be clear…

I really, really wanted to be there.

I just couldn’t though.  It started a few weeks ago with my high blood pressure issue, and I thought everything was all good after I raced the first event in the Southern Classic Series.  We went on vacation afterwards, and I was in good health and felt like normal (whatever the hell that is.)  Race two in the series was the Sunday after we got back, but about mid week I felt shitty again.  Still, I signed up for the race in Sanford, hoping that I would be fine by then.

I wasn’t.  I woke up early that Sunday morning and couldn’t drag my ass out of bed.  I paid for a race where I normally do quite well (three for three with podiums including a win last year) but I didn’t even have the energy to get up and go.  So, I went back to bed and slept for several hours.  I was disappoint but I know I did the right thing (the little lady thought so too.)  It was at that moment that I made a plan.

With a few weeks to get ready for the next race in the series, I would take it a little easy and get myself back into a proper state.  That meant skipping out of a race (Warrior Creek, pay attention) that I look forward to every year, and that I’d already paid for.  For some reason I thought I would do it anyway, so I never bothered to sell my entry to some deserving racer on the waiting list.  That means I ended up making a donation to the trails up there with my unused entry.  It was all good though, because I was starting to feel much better.  With the next race coming up in a little over a week, I took off to Charleston to ride a little, but more importantly, relax and have fun. 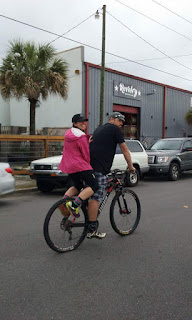 It was fun (I told you yesterday.)  We rode a lot, and I was feeling no ill effects of my ailment.  I even talked to everyone down there about how I was ready to race the following weekend.  Then, my plan went to shit towards the end of our urban ride.

While we were riding in front of The Citadel, I was hopping up steps with my bike and jumping back off.  You know, the usual urban ride shit.  I haz skills and all that, but I made one little mistake.  Immediately after riding off of one curb I headed for another set of steps and misjudged my landing on the way up somehow (must have been the strong winds.)  My front wheel came down, immediately stopped, and I was thrown violently over the bars onto the hard concrete (with my bike landing on top of me.)  I landed on my shoulder, and the way my arm was tucked into my body it jammed it directly into the left side of my rib cage.

It knocked the wind out of me, and when everyone came over to see if I was okay I just said, “Yeah.”  It hurt really bad though, but I just tried to shake it off.  I’d somehow gotten my right hand caught under me too, and it immediately swelled up.  I started breathing normally but the pain was setting in.  We eventually started riding again and I was in a tremendous amount of pain.  I tried my best to shake it off so I wouldn’t hold up the rest of the group.  We made it back to where we parked, loaded up our shit, and headed back to home base.

I was nauseous.  The pain was worse.  I took a hot shower and felt a little better.  We went out to eat and I didn’t drink anything except sweet tea.  I ended up drinking a beer later, but I didn’t feel good enough to drink the proper amount to make the pain go away.  I slept like shit that night, of course.

The next day, we skipped the bikes and hung out near the beach.  I hurt more, but I was able to drink enough to dull it a little. 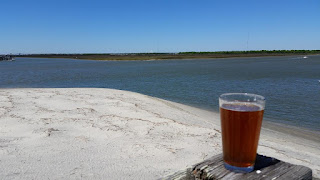 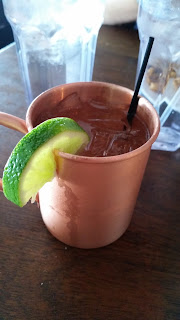 We eventually drove back home to Charlotte that evening, and when I got to bed I slept like shit again.  The swelling and bruising was worse on Monday, so I sought some medical attention. 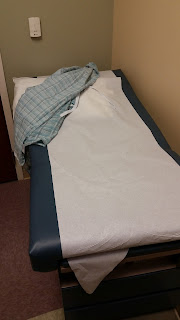 A bunch of X-rays later and it was confirmed.  Badly sprained wrist and two broken ribs (and lots of cuts and bruises.)  It hurts when I laugh, cough, sneeze, move around, and sleep.  Pretty much everything I do.  I got some good pain meds, but since I still have to go to work I can’t use them during the day.  Awesome.  I was told that I’ll heal up in about six weeks or so, and that I can start riding again as soon as I feel like it.  However, riding on trails is a no go for a while.

So what does this mean for my season?  It’s over, at least for a little while.  I had this grand plan of winning the Southern Classic Series again this year, and retiring from cross country racing to focus on other shit.  Looks like that plan has been changed, and my retirement might be a little early.  I took a break from racing to fix one medical issue, only to cause another.  So much win.

I’ll be back on the bike.  And I’ll race again I guess.  But winning (or even placing) in the Southern Classic Series will be damn near impossible because when I finally get back to it I’ll be too far behind to catch up.  I’ve accepted that, but I don’t know where to go from here.  I’ll take the time to heal up properly, and ride what I can in the meantime.

So yeah, it’s gonna suck for a while I guess.  Who gives a shit.  People have to deal with this kind of crap all the time in sports.  Why should I be any different?

I feel your pain. Broke two back in 2011. You can reads abouts it on my blog. Just do a search for "Vegas". Need I say more? Heal up, buddy.

Holy shit. Hope you're feeling better and get healed up soon. What's the big deal about taking the meds at work? It makes for a better day for me. My back surgery back in July failed and my L5S1 disc has reruptured!I have to take them TO work. How can you concentrate with pain? Remember your age.. lol

Dude, wow. That would have been me if i went to Chucktown, fo sho