Just not all the time.  Actually, let me clarify.  It isn't my whole life anymore.  Things change I guess.  Maybe so much racing in such a short amount of time did it.  Maybe it's the cycling companies with shitty marketing people that have no idea what their customers want.  Maybe it's all these consumers falling for whatever bullshit the bike companies put out there.  Maybe drifting away from my bike friends when they invite me places caused me to rethink how much I ride.

I still love bikes.  And I will still ride often.  I just want to do other things too.  Like fishing.  I did that a lot down in Florida.  And I still rode bikes.  When I moved here though, bikes took over full time.  I didn't go fishing again until just a few weeks ago.  I enjoyed it.  Actually, I enjoyed the fact that I was enjoying something other than riding bikes.  Maybe I just enjoyed being alone.  I dunno.

That's probably it.  Alone is nice.  There are no people there.

I still have lots of bike friends.  We just don't hang out like we once did.  That's all my fault.  Sometimes, I just go off into my own world and don't want to be around anyone.  That's just me.

Oh, back to fishing.  When I got my fishing license a few weeks ago and dropped a line in the water for the first time in ten years, there was a reason other than the fact that I hadn't done it in a while.  Since we moved to the other side of town (and closer to the river), I'd starting thinking about getting a boat.  Then I started thinking about how much of a pain in the ass it would be to maintain a boat.  Hell, I hated having to put our motorcycles away for the winter and struggling with getting them running again.  There was no way I wanted to do the same thing with a boat.

So I started thinking about other ways to fish off shore.  Down in Florida, I always had friends with boats.  Close friends too (not the ones that you felt guilty about asking to go out with.)  Here, maybe not so much .  Plus, I wanted to go out whenever I wanted without having to ask someone.  I started looking for an alternative.  I'd done some canoeing down in the Sunshine State, but I remembered those thing being really unstable.  So, I started looking at kayaks.

I didn't know shit about kayaks.  I knew that I would eventually want to fish off of one (duh), but I had a lot to learn about what kind I needed for that (to make it fun.)  Luckily, when I don't know something, I work my ass off to learn about it.  I learned much about kayaks over the last month or so, and armed with that newfound knowledge I went out and bought one.  It's a twelve foot sit on top fishing kayak, with plenty of room for my big ass and all my shit.  I still had one problem though...

I'd never been on one before.

That didn't stop me from taking it out by myself (which the experts strongly advise against) right after I bought it.  I'd already found a place to put it in the water on the Catawba River (see, I did my homework) that was only about three miles from the house.  I put on my PFD, grabbed a paddle, and started floating away on my new little boat.

What the hell was I doing?

I was a little frightened.  I can swim just fine (I grew up on a lake), but I still had this uncontrollable fear of tipping over.  After about five minutes though, I'd figured the whole thing out.  My lifelong pal Mr. Shepherd told me how easy it was, and he wasn't kidding.  So, I drifted off toward my first solo adventure on the water... 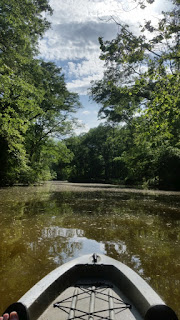 The Catawba river is pretty cool.  The current isn't super strong, plus there are all kinds of little creeks and coves that branch off of it.  I'd looked at a map before I shoved off so I kinda knew where I was headed.  I had no idea what I would see though.

Like this houseboat out in the middle of nowhere... 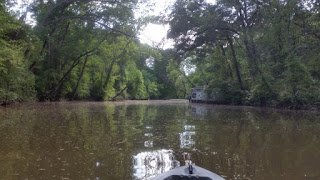 It was creepy as shit too.  It looked like it had been abandoned for years. 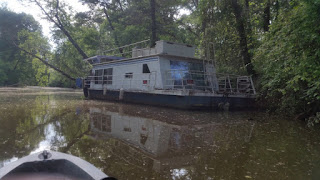 When I showed Lunchbox that picture, he said it was probably the scene of a murder and the bodies were still on board.  I don't really doubt that one bit.

I cruised up that creek (with a paddle of course) for a good while before I turned around.  I headed back out to the open waters of the Catawba and I had the place to myself. 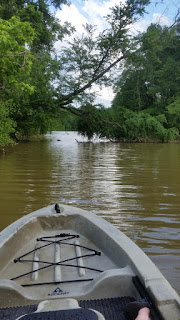 After that first creek, I didn't really have anywhere else specific to go.  I just wandered up and down the river, taking photos when I felt comfortable doing so.  Or when I passed under neat shit. 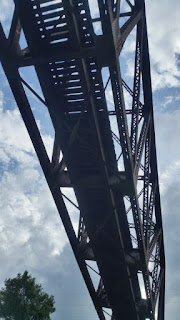 It was a good day.  I was out on the water for maybe an hour and a half and I had a blast.  And it was much easier than I thought it would be.  I figure that I'll take one more trip in it to get comfortable before I bring all my fishing gear.  And next time I plan to be out on the water for much longer.

And no, this piece of shit blog isn't gonna be all about kayaks from now on.  I still ride bikes and do bike stuff.  Hell, I do a lot of things.

Mostly whatever the hell I want to do.

See y'all tomorrow for Fun Friday most likely.
Posted by TheMutt at 8:14 AM

Think I saw that houseboat in one of the horror flicks, you know where the mass murderer sneaks up on the people with a machete.