So with three days off from work for the holiday last weekend, I had plenty of time to do ALL THE THINGS.  Unfortunately, I planned too much and didn't get enough done.  That road ride I talked about yesterday?  That was the only time I touched a bike.  Sad, I know.  I meant to go to the hills on Sunday, but I spent my Saturday doing way too much and wore myself out.

It all started bright and early on Saturday morning, when I forced Lunchbox to get out of bed and go to Uwharrie with me.  We didn't bring bikes though, because we had other plans.  They have a nice outdoor range there, and I wanted to play with my "dangerous" "assault" rifle.

Notice that rifle is the only thing not in quotes.

Anyway, since I can't blog without photos... 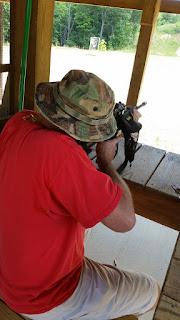 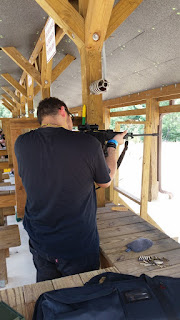 Before you get all gun control on me, you can kiss my ass.  I'm responsible and not some gun nut.  I'm a veteran, and these types of weapons are familiar to me, plus they are fun to shoot.  My weapon didn't kill anyone that day (or any other day.)  We shot defenseless paper targets, and no humans were harmed.  Still upset that people can buy these things?  Who gives a shit.

We fired 160 rounds while we were there, which means that we spent quite a bit of time on the range.  When you see all those commercials about the military and how fun it looks, they fail to show the boring parts...

Like cleaning your weapon for hours until it's perfect. 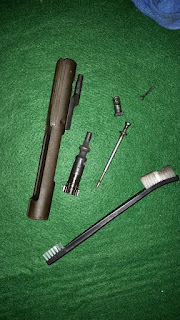 Over 26 years later, and it still comes naturally.

It wasn't all about guns that day though.  I was hanging out with my son, which is always great.  I haven't felt like hanging out with any of my friends lately for some reason, but I will always enjoy time spent with Lunchbox.  After we left the range, I took him down to the nearby Town Creek Indian Mound for a little history. 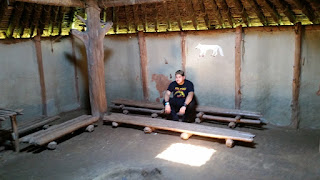 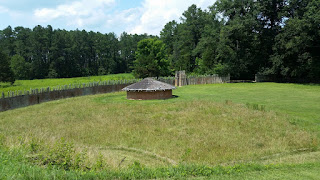 It was his first time there and he enjoyed it.  We spent hours there, but eventually it was time to get home.  It was an awesome day with my son but I still had more to do.  After cleaning up and relaxing a bit, I headed west and across the river to the little town of Gastonia to watch my friends play some music. 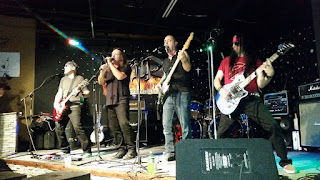 That's the band Fire.  I've talked about them a bunch.  They are awesome, playing some old school metal and rocking the shit out of it.  This show in particular was really good too.  They were loose and having a ton of fun up there, and their sound was the best I've ever heard.  They are starting to pick up some steam around here, so if you haven't seen them live yet you'd better hurry.  The next show is in a couple of weeks, and I'll be there too.

Guns, history, and METAL.  All that shit in one day wore this old man out.  I slept away most of my Sunday because I was out until 3:30 a.m.  I needed my beauty sleep I guess.

Maybe I should get back to bed.
Posted by TheMutt at 8:51 AM