Why Yes, I Do Ride Bikes

With yesterday’s talk of spectating the XTERRA Whitewater, you might assume that I just stood around all weekend. Not true. I told y’all that I was off last Friday, and I took a little road trip. Yup, me and the Dirty Party Cycle headed down to the Forks Area Trail System, and it would be the DPC’s first time out there. We were in for a good time, and lots of miles.


On the way down there on Interstate 20, we saw a big haze in the air. There was some kind of wildfire in the area, and it kept getting thicker the closer we got to Augusta. I was a little worried that we would have trouble breathing with all the smoke around, but we had travelled way too far to abandon the ride. We got to the trailhead and suited up, ready to tackle the big-ass pump track that is FATS. We decided on the Great Wall loop first, and hauled ass on its 8+ miles of fast, flowy singletrack. We stopped afterwards for a rest, and to plan the rest of our ride. 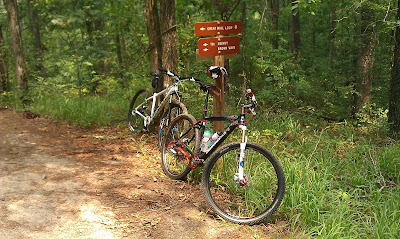 Since we were pretty close to the trailhead, we decided to refill our water bottles and head over to the previously unridden (to both of us) other side. There were quite a few miles of trail over there, but if it was anything like the stuff I have ridden, then it would be a piece of cake. Famous last words.


We started out on a short connector trail, then caught a fire road to the next loop. It was way faster than the stuff we just finished, and we were flying down the trail. Since I was going to fast and about to run over my pal the DPC, I backed off a little and decided to let him get ahead of me quite a bit so I could go much, much faster. Turns out I shouldn’t have.


On one section I was going well over twenty miles per hour, and hit a few jumps. Somehow I came down one one with a handful of front and rear brake, and suddenly I was sliding. Still clipped in, my bike (and me) slid towards a big tree at full speed. At the last minute my bike popped out from underneath me, and slid down an embankment. I stopped just inches before the tree. It was one of those crashes that you know is gonna end badly, but somehow my life was spare. I have wrecked this spectacularly in quite sometime, and I was was overdue I guess. I gathered up some dirt along the way, and scraped up my leg a little. 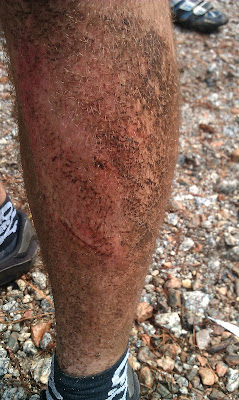 After I cleaned it off, the next day it looked like this: 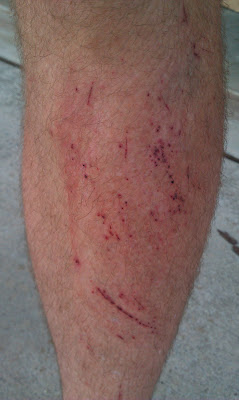 Not too bad I guess.

After fishing my bike out of a ravine, I hopped back on and tried to catch my friend. At that point he was a little worried that I wasn’t right behind him, and had turned around to find me. We regrouped and got going again, and ended up on a long gravel climb to get to the rest of the trail. 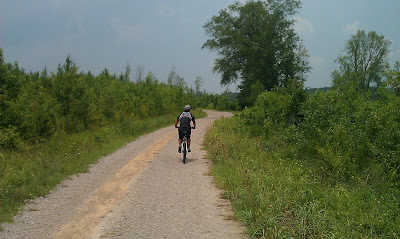 The next two loops were pretty fun, but there was a lot more climbing that we were prepared for. It was a little more technical over there too, but that wasn’t the problem. It was around 95 degrees, with probably about 95 percent humidity. Because of that our water supply was running low, but we had no choice but to keep going. I felt like I was in a race. You know, the ones where I end up ill-prepared for such harsh conditions and find myself in survival mode.


The rest of the ride back was kind of a blur, and I think we were on autopilot. We were pushing pretty hard to get back quickly, but our lack of fluids made things tough. We even had to play roadie at one point. 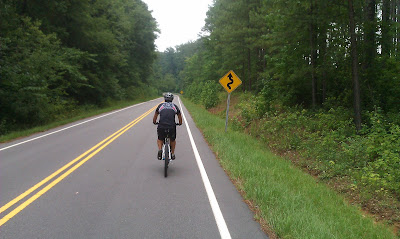 Luckily, I had a new friend along for the ride to help me get through it. My new riding companion, a tough as nails Mandalorian: 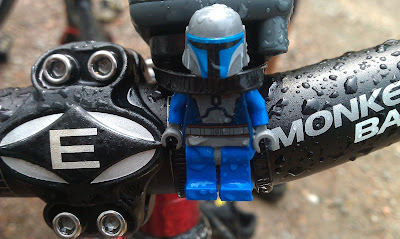 After what seemed like forever, we made it back to the trailhead. Instead of refilling our water bottles and heading back out to finish the close to forty miles of our ride, we called it quits. My new Twin Six jersey was soaked with sweat, and I had nothing left. 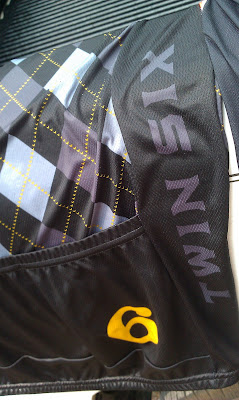 It was actually pretty good timing on our part. The sky opened up and it started raining, and the cool raindrops felt good. Instead of an epic 40+ mile ride, we ended up with a little over twenty seven. 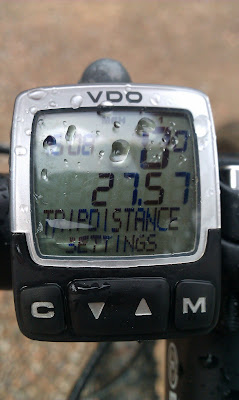 We were satisfied, but I feel bad that the DPC missed out on some of the best trails out there. We did enough mileage for one day, but I wanted more. My body wasn’t having it, and the rain pissed all over our plans anyway. I guess we’ll have to plan another trip down there, and next time we’ll be a little more prepared. At least we found some good food when we were finished. 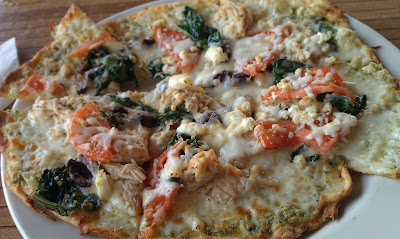 Yeah, there was beer too, but I drank it too fast to get a photo of it. Beer is the ultimate recovery drink, and it makes me happy. 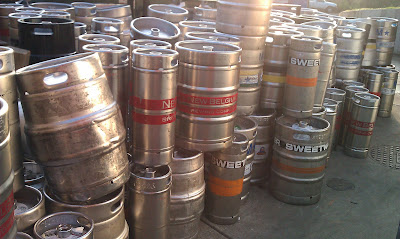