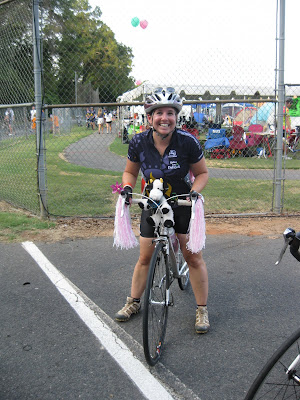 This weekend, Little Miss Sunshine rode in the 24 Hours of Booty. that’s probably not a surprise to you, since I have been blabbing about it quite a bit lately. What is a surprise is that I’m not gonna tell you the story about her adventure. This time, I’ll let her tell you about it. I don’t normally let other people guest post on here (aside from Mr. Shepherd, who has been on the blog from the beginning.) I figured that this would be better told in her own words. Hell, it saves me from writing today, which is good because I don’t really feel like it anyway.


I started this adventure not knowing what to expect, other than riding my bike and raising money for Cancer research. The temperature in Charlotte was over 100 degrees with no relief in sight. Cancer has hit too close to home. I have lost 4 family members to cancer and this ride was a tribute to them. I decided to put reminders of them on my bike so they could ride with me. I had a cow and a tractor for my Grandfather, the dairy farmer. My pink flowers , pink streamers and pink hair were for my Great Gram and Grandmother that both lost the battle of breast cancer. For my Uncle, I chose a sunflower, as he loved to garden and was always proud of his huge sunflowers. The team I was on raised over $50,000 for this event. Just seeing everyone come together and share their stories was amazing. Each person had a different, moving story. There were people everywhere, participants, volunteers, sponsors, survivors and Charlotte residents. Even Sir Purr made an appearance and gave me “knuckles” during the ride!! The parade lap was so moving you couldn’t help but cry. It was amazing. It definitely was not the boring loop I had ridden many times before. It was…… Alive! The streets were packed as were the sidewalks and front lawns along the route.


I set a goal for myself of 100 miles, or 33 laps. I had never ridden that far on a bike at one time, so it was a challenge for me. The laps sounded less scary than 100 miles, but I had 24 hours to do it. I rode a little, socialized a little and didn’t really have a set plan. Once Honey left, I put the hammer down. There were still people cheering on the streets and it kept us moving. One lady was drinking a glass of red wine and I thought about grabbing it. She might have not minded. Some residents still had music going and the college people were awesome! They tried to pass us beer and even lit sparklers so we could see the road better. Even the water station had entertainment. I had drank so much Powerade and water by this time, I thought I was going to pee purple. Hhhmmm, that’d be interesting. I had 50 miles by midnight and felt pretty good. I headed into camp for a midnight pizza party and to change shorts. That was when we found out the sprinkler system on the soccer field was going off. The problem is that the soccer field was currently tent city for the event participants. A few tents got flooded out. Well, at temps of 90 degrees, it felt kind of refreshing. Back out on the course, all was well. I made some new friends, and rode a lot. I met up with a friend about 2:30 and he rode me to my 65 mile mark. My headlamp was burning low, so I headed in for a change. Wow, I outrode my lights!! A quick change-out with some help from a local shop and I was back out spinning. I had thought about sleeping but I was too wired so I figured I’d ride until I got tired. At 75 miles, I pushed to 80. At 4am I was craving gum and a gracious Char-Meck police officer dug into his pockets to alleviate the craving. I finally called it a night about 5am, when my shoulders cramped up and my knee started to ache. About 6am, I finally napped in my tent.


I woke up about 8am, found some catered breakfast, wandered around and found some friends. I got my bike and headed for my last 6 laps. My butt was screaming that it wanted to go back to the tent. I guess it had enough last night. I did find a comfortable position and in about ½ a lap, my butt went numb. Seeing all the people cheering on the Booty riders made me forget my aches and pains. The tears came back as I was passed, going uphill, by a survivor. I couldn’t help but cheer her on. With 3 laps to go, I headed to camp to locate the hubby. I found a Dirt Diva sister and convinced her to take a lap with me. She had ridden 45 miles and 1 lap would bring her closer to her goal of 50 miles. She rode 2 laps, kept me company and reached her goal of 50 miles. I rode my last lap with a huge smile on my face, knowing I was closing in on 100 miles. I was so happy. I had ridden my farthest distance, throughout the night, and for a great cause. I still can’t fathom that I rode that far or for that long, but I did it and I was quite proud. For those that I rode for, I know they would have been proud. I told my story numerous times and had my picture taken a few times. I am glad I got to share my story and honor my fallen family members in such a way. I’ll see you all out there next year.


Thanks for reading. I’ll see y’all tomorrow.
Posted by TheMutt at 8:47 AM

Good Job Kellis. I cant help but think when i first met you only a few years ago and you didn't bike at all, now a century under your belt (not a weenie metric like mine either)