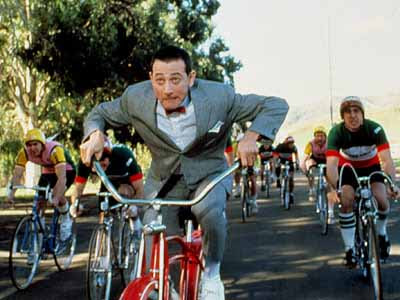 Racing, I mean. For a few weeks, I entertained the idea of testing myself on the bike with other roadie types. Not because I thought I could hang with them, but because I wanted something that would push me. I was scared to death to mix it up with a bunch of “serious” road riders, and I couldn’t make up my mind. With five days of local road racing to choose from, I had plenty of opportunities. I just didn’t have the balls to do it.


I think the biggest thing was the fact that I might crash. Sure, I’ve crashed…a lot. Only on my mountain bike though. I’ve gone over the bars more times than I can recall, slid out on the trail while still clipped in, and got to know way too many tress. I’ve had a concussion, broken ribs, and a dislocated shoulder. Having a wreck on the trail doesn’t bother me. It happens, and it will probably keep on happening. Crashing on the road just seemed way to scary though.


The race I thought about entering was on Sunday, and up until Saturday I still thought I might do it. But after careful thinking, I used my best judgement and bowed out of it. I’m not a full on roadie, but I still wanted to go for a road ride though. 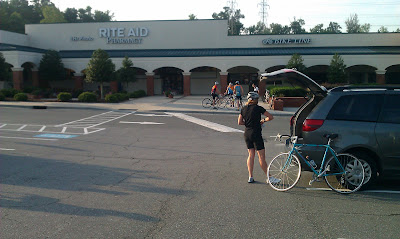 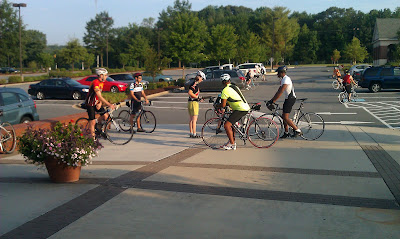 I rode from my house again, but this time I was there with plenty of time to spare. The six mile, slightly hilly jaunt served as a good warm up, but I felt like shit. My stomach was in knots, and I was afraid that I might have some kind of “accident.” I fought it off though, and took my place at the front of the pack with the rally fast guys. Since it was a no-drop ride, I could fall back if I started feeling icky.


We took off, and immediately the pace kicked into overdrive. There was a new guy there, and he looked pretty serious. We were lined up at 4th and 5th in the lead group, and when we got on the first straightaway he jumped out and sprinted away. Not to be outdone, I jumped out and gave chase. That guy was fast, and it took me a while to catch him. I had to hammer up a short but steep climb, and I started to regret my decision to play along. We stopped at the usual rendezvous point, and I had a few minutes to recover.


When we got back on the road, I was in the lead. On a long downhill, I shifted into my highest gear and gunned it. I was upwards of forty miles per hour, with the rest of the group in hot pursuit. The fast downhill quickly turned into a long climb, and I tried my best to mash up it. It didn’t take me long to fizzle out though, and one by one most of the group passed me by. I was hurting. My legs were okay, but my stomach still bothered me quite a bit.


I recovered a little, and got back with the pack. The super fast new guy took off again, and once again I went after him. This time though, I didn’t come close. Two other guys got up there, but I just didn’t have it in me. I was still going fast, and could see those three guys way up front. It would stay that way for the rest of the ride.


I limped my way back to the shop parking lot, and I was glad it was over. I felt a little better, but my legs were toast. I still had to ride the six mile return trip to get home, and I was not looking forward to it. If someone would have offered me a ride, I would have gladly taken it. I guess that’s a sign of how I would have felt during the race that I didn’t do. That is, if I would've stayed upright.


The rest of the day I was in a daze. I had already planned on cleaning and rearranging the garage, and it took forever in my depleted state. I eventually got it done, thanks to tons of beer and manual labor assistance from the Dirty Party Cycle. He showed up after riding at Poplar Tent, which I couldn’t do because I tried to kill myself on the road bike. I’m getting way too into this roadie shit, especially if it’s affecting my mountain biking. I guess we’ll see tonight, when I head out for a trail ride. You know, on my mountain bike.