After riding on Saturday and doing trail work afterwards, I needed more.  I briefly considered going on a road ride on Sunday morning, but then I came to my senses.  Road riding sounded about as fun as getting kicked in the balls by a rabid goat, and I wanted no part of that.  Instead, I decided to meet up with TomTom again to do a little more trail work.

You know, because that shit ain’t gonna build itself. 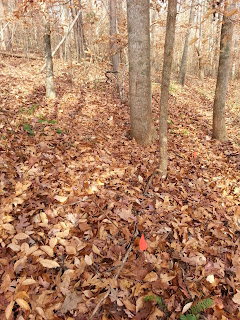 We got to work on the section that Good Guy Greg helped us clear out.  With the brush cut back and the leaves raked away, we dug into the dirt to make some singletrack. 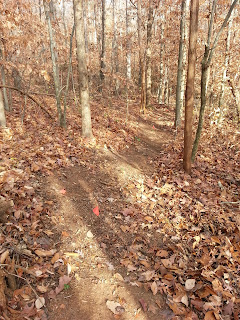 With all that digging around, we keep finding animal bones. 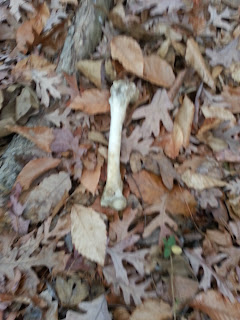 I imagine that it won’t be long until we find some human remains out there.

Anyway, this is the last part of the first phase (wait, what?), and it ends on a long downhill with a couple of switchbacks.  The very end of this section has you shooting down towards a dry creek bed.

It’s gonna be so choice. 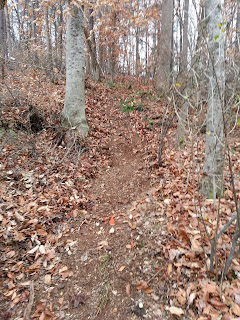 The elevation change out there will make for some fun lines, and the speed we’ll get with be close to scary.  We worked as fast as we could so we could test ride it, but there’s so much to be done. 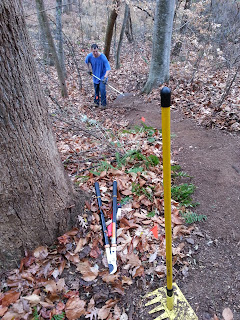 There’s a lot of benching to do on the approach to that last downhill, and a few holes that need to be filled in to make it flow.  I do like the way it’s turning out though. 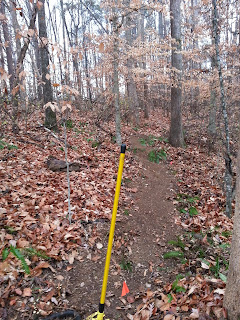 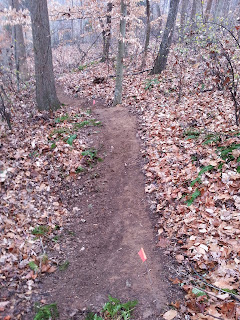 There haven’t been a whole lot of roots so far, so we were pretty happy to be able to leave some on a tricky downhill turn. 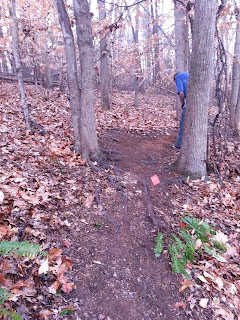 We are almost finished with the first section.  There’s plenty of work to be done, but we had to call it quits for the day.  Next time we go we should have it finished, and it will go faster if we can round up some more help.  It’s really fun so far, but this is just the beginning.  I’m thinking that we will get well over twenty miles, but at our slow pace it will take up years to build it.

20 miles, holy cow!! I had no idea you were working with that much out there... thought it was just gonna be a short little thing... I'd be down to help out sometime, let me know!