Battle Of The Bikes

I kinda got screwed. 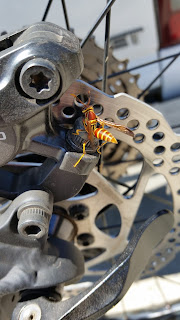 After a good week of riding/training/talking to a friend about getting burned out, I was ready to jump back into the Southern Classic Series and give it all I had.  After a couple of wrong turns yesterday morning, I arrived at in ready to race.  When I lined up at the start, I noticed a couple of Cat1 guys in my class, no doubt taking the easy way out so they could get on the podium. It discouraged me a little so I lined up in the second row of a pretty big field.  The plan was to ride my own pace… 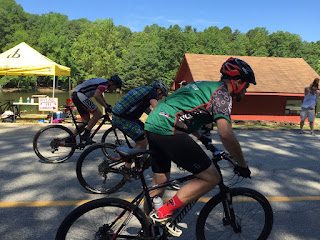 When the race started, the “ringers” took off.  I got a little mad about it, and transferred that anger to my pedals.  I put the hammer down and dropped the whole field.  I knew I couldn’t keep that pace up the entire race, but I wanted to make them work to catch me.  I had a huge gap before we hit the singletrack…

Then I noticed that something wasn’t quite right.

After a proper warm up (for once) I felt good physically but had an issue with my bike.  As I tried to shift into a different gear something made a crunching sound.  I looked down to see my chain all crooked and junk.  Then all of a sudden the whole field went by me.  Shit.

I stopped for a moment to see what it was and couldn’t find the problem.  I rode a little further and felt like I was dragging an anvil behind my bike.  I stopped this time and found that my rear skewer was askew.  I straightened everything out, tightened it, and took off again.  I was hurting bad from such a sudden stop, but I knew I could catch back up if I worked hard enough at it.  I pushed and pushed, and eventually came up on one guy in my class.  I hesitated to pass him since I was so tired from my effort to catch back up, but eventually he told me to go by.  I worked hard to put a gap on him, and with my new-found confidence I started looking for the rest of the pack.

The trail was sorta fun, but it was typical cross country stuff and very roadie friendly.  I think maybe I rolled over one log pile, hit a few roots, and maybe even saw a rock or two.  This did not bode well for me, since would have to work extra hard to even catch a glimpse of the rest of the field.  I kept working but I was getting bored.  I was on lap one of three so I had plenty of time, but I didn’t know if I could survive the boredom.

I made it through one lap, where Mike was once again waiting with a camera. 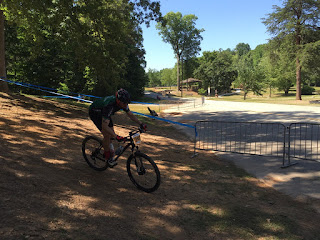 One down, two to go.  Could I keep going?