Last Saturday was a pretty special event.  Our local club here, the Tarheel Trailblazers, said goodbye to one of our own.  Most of you here locally know Big Bike Mike, and no doubt have seen him working hard on our trails.  He’s decided to retire and move on to Snowshoe where he’ll be doing more trail work and riding some downhill.  Definitely not your typical retirement.

Anyway, he’s done most of his work up at Lake Norman State Park, keeping that place in pristine condition.  He worked as hard as a crew of ten (or more) men, and gave up a ton of riding time so others can enjoy their rides.  That's commendable, so we gathered up there for one final ride with him. 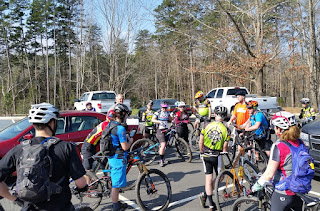 We had two groups scheduled, and I somehow ended up in the one without Big Bike Mike.  I rode with the “fun bunch”, a crew of folks that are know for flying through the air instead of racing through the woods (not to say that the other group was a bunch of racers, mind you.)

We did “race” through the woods a little though: 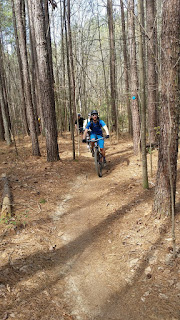 But we also stopped to session little jump line and it was rad. 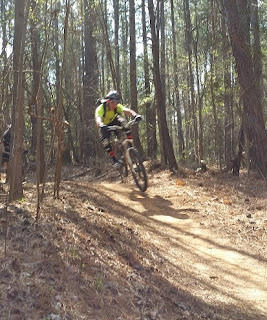 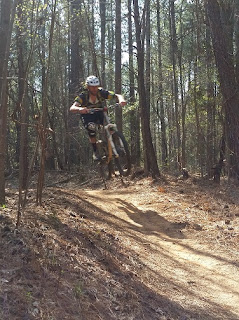 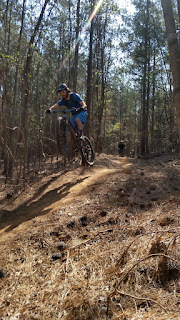 Eventually, both groups made it back safe and sound.  Much fun was had.  We gathered around one of the shelters for a big cookout and some socializing. 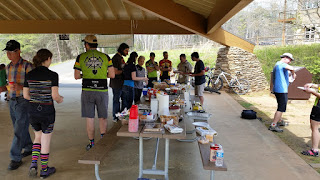 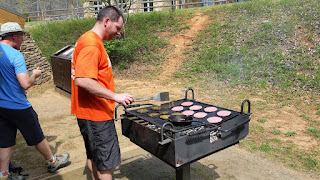 When our bellies were full, we gathered around to present an award to the man of the hour.  For some reason I was designated as the public speaker and I presented the first time award to Big Bike Mike: 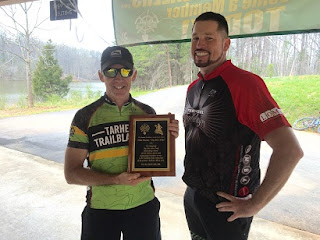 Mike on the left, and some dude standing next to him.

In case you can't see it well enough, the text on the award reads:

No one is more deserving of such an award for sure.  Being the “inaugural” award though, it’s gonna be hard for anyone else to win it in the future.  He definitely set a high standard as far as trail work goes, and it will be extremely difficult to match his accomplishments.  He is a helluva good rider too, and a great all around guy.  If you had a chance to work or ride with him, count yourself lucky.

We’ll definitely miss him around here for sure.