Racin’ With The Big Boys 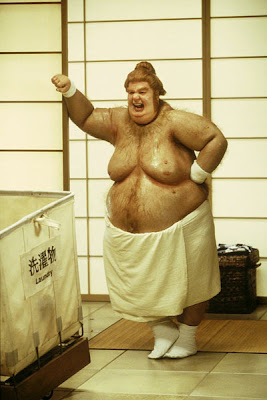 Yesterday’s Clydesdale category race at the 2010 Catawba Riverfront Classic wasn’t an automatic trip to the podium to me (not like I thought it would be anyway.) Even though I won this event last year, I soon learned that a repeat would be very difficult. Sure, I’m a much better rider this year, but the competition was a helluva lot better too. As one of the guys in my class put it, “I looked around and saw all of these Ivan Drago-looking guys.” He was right, since it definitely wasn’t a bunch of portly fellers lined up to work off the vast quantities of beer they had consumed.


After a thorough warm-up, I took my spot on the start line, next to an old high school chum of mine, Hop. He basically said he would just try to keep me in his sights the whole time, hoping that would give him a pretty decent finish. I was just happy to have someone push me to my limits the whole race. I would later discover that I needed this more than I thought.


When the race started, everyone took off pretty fast. I had trouble clipping in with my right foot, so I watched as the pack took off ahead of me in the grassy field. Once I got clipped in, I mashed as hard as I could to catch the leaders. Two guys in team kits (real professional Clydesdales I guess) were out front, but they hesitated. It almost seemed like they were content with leading into the woods, and not pushing it. I wasn’t having that, so I snaked by them for the holeshot. 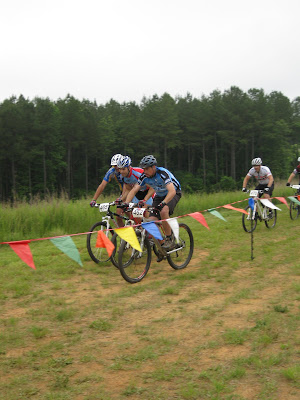 As I hit the trail, I took off at full bore. These guys were gonna have to fight to take away my lead. As we progressed through the first loop in the trail, we quickly came up on the junior riders. I managed to get around two of them pretty quickly, but the next one was all over the trail. I shouted out words of encouragement to them, but I also let them know I wanted to pass. As I went around to the right, one of those Professional Clydesdales in his fancy team kit decided to run the little kid into me when he passed on his left. I picked it up to keep the kid from crashing into me, then Mr. Professional decided to try to take me out and tried to introduce me to a tree. I gave him a few choice words, and watched as he sped away. He didn’t care, since his fancy team probably required him to get a win. I’m glad my team kinda sucks, since there is no pressure like that for us.


I held onto second place for a while, but these guys were hanging on. After a long downhill section and a big climb, I was started to feel the effects of too much beer the day before. Two more guys passed me by, but I stuck to them like glue. The podium was still in my sight, since I was currently in fourth place. I hung on as long as I could, but all of those team kits gave them a lot more energy and recovery powers. Even though I was maintaining a pretty decent pace, I lost another place. I was currently in sixth place, but my pal Hop was right behind me.


We rode together for quite a while, but I lost him somewhere after that. I never let up though, since I knew he would be back. I needed him back there though, since that was the best way for me to make myself go faster. As the end of the trail was near, I saw him again. I shifted into the big ring (one reason why I like gears so much) and let it fly. I rode in at a breakneck pace, and finished at a respectable 6th place. I know, it’s not first like last year, but I actually shaved ten minutes off of my time (and I was only six minutes off of the winner.) I guess this can be considered improvement, especially since there were a few Professionals in our class. The rest of the class was filled with regular over-200 pound guys, so we at least were competitive wth each other. There’s always next year. At least I was bleeding B-43, or maybe I just used a cheap sticker. 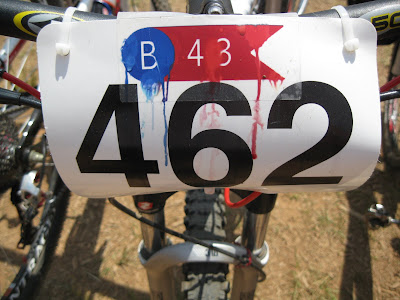 As for the event, it was great. This particular race was a fundraiser for our local club, the Tarheel Trailblazers, and it was cool to see so many of our club members out there to volunteer. I stuck around after my race to help, and I even heard that local racing legend and worldwide blog celebrity, Dicky learned how do do some race registration from B-43’s own Little Miss Sunshine. Look at everybody, working together. 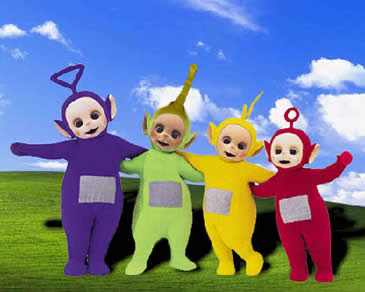