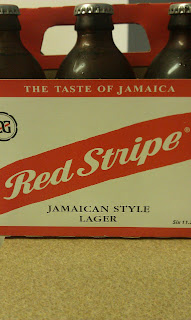 Actually I was talking about my geared bike.

After a shitty race on Sunday, I went out to the garage to find this: 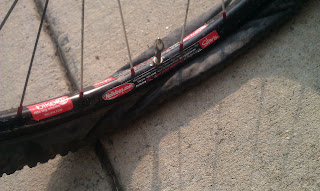 My rear tire had become flat.  I figured maybe it was some kind of fluke, so I pumped it up and checked everything.  I could hear air leaking out somewhere, and eventually I found it. 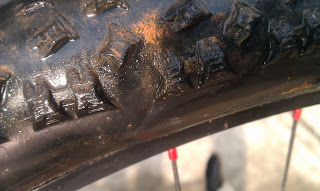 I guess that happened during the race and I didn’t notice it.  I had bigger issues at the time, but I’m really lucky that the tire didn’t explode while I was out there.  Upon further inspection, I found something else that was kinda odd. 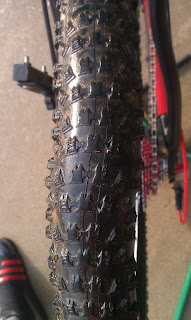 See how it's warped?

That might be part of what was going on with my lack of handling during the race.  Did I mention that the other day?  Probably not.  Anyway, the tire is over a year old, and very well worn.  I knew I had to replace it, but I kept putting it off.  In fact, I’ve been putting my geared bike off all together.  I other ride it during the Southern Classic races, and it sits there collecting dust the rest of the time.  Like Little Miss Sunshine told me (with a big fat “I told you so”), I needed to show my geared bike a little love.

Luckily, I was prepared for such an occasion. 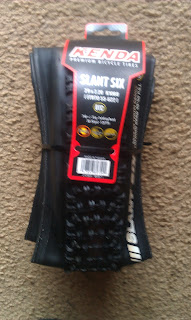 I’ve had this tire hanging around for a while, and now I pretty much had to use it.  I pulled the old tire off and took a peek inside. 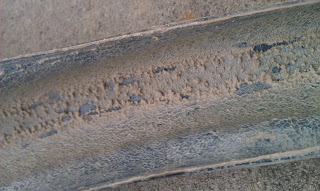 So that’s what a year’s worth of Stan’s looks like.  Hmmm.

I got the new tire on, and gave my bike a good washing.  Aside from the mud I acquired in Sunday’s race, I still had dust on it from when I race at Uwharrie over a month ago.  I guess I should really start paying attention to my “other” bike from now on.

But damn, I love that single speed.

Sometime in the next few days, I’ll switch my SS bike back to a 32X20 configuration, and I probably won’t ride it again around here after that until I get back from my trip.  I guess that means if I ride again before we leave I’ll be riding my geared bike.

That’s probably not a good way to prepare for a single speed race, is it?