Despite the fact that I don’t have a lot to talk about, I still find myself here trying to come up with something.  I mean, I did ride my bike a little bit last night, but it wasn’t anything really worth talking about.  I guess I still have a story though.

Yesterday after work, Lunchbox and I were out in the yard doing the usual springtime stuff (mowing, weed whacking, etc.)  When I was on the side of the house, I was chopping down grass on the edge of a flower garden when I noticed a critter come flying out of a hole.  At first I thought it was a frog, but when another one popped out I realized what I had found. 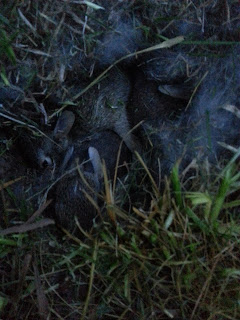 I stopped what I was doing (obviously to take that photo) and summoned Lunchbox over to take a look.  A couple of baby rabbits had run off in terror, so we spent the next few minutes rounding them up.  Since they were really young, they weren’t hard to capture. 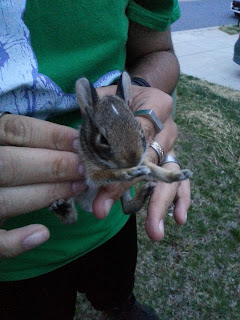 There were only three (that I knew of) out of the nest, so we put them back and covered it it.  Lunchbox stood guard while I finished the yard, and we made sure everyone was safe and sound.  However, later that evening when Little Miss Sunshine got home from a big day of Summer Series racing (she got 2nd by the way) we saw another one running across the yard.  I guess we missed the little guy with the first round up, so she grabbed him and took him to safety. 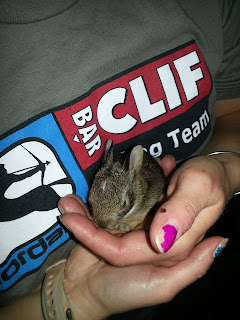 I checked on them again a little while ago, and everyone seems to be doing fine.  I did get one of them with the weed whacker string, but it was a small cut and shouldn’t be a problem.  We did our good deed, so now I won’t feel so bad when they all leave the nest for good and become food for the screech owl that’s looming in the trees across the street.

Yeah, I just did a whole post about saving baby rabbits.  I have a heart, you know.  It’s cold and dark sometimes, but it’s a heart nonetheless.

In other news, you may see some changes here today.  D-Wayne redesigned my blog header again, so I will have that up here sometime today.  If you don’t see anything new right now, then I haven’t changed it yet.  I’ll get to it eventually, you know.

If I’m not too busy saving baby rabbits.