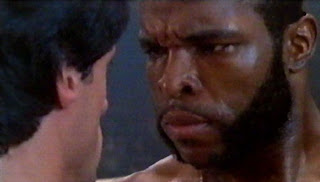 Tomorrow, I’m hitting the trails up in for the 5th Annual 6 Hours of Warrior Creek (this is my fourth.)  I’m pretty sure I’m not ready, and I’m even more sure that it will hurt.  I’ve been riding quite a bit lately, but I haven’t slept worth a damn for the last couple of weeks.  Couple that with a 5:00 a.m. wakeup in the morning and the fact that I went to and from Raleigh last night to pick up Lunchbox, it’s safe to say that I’m gonna be really tired.  Plus, we’ve had some (more) rain around here, so the trails should be slicker than dog snot.

Also, I made a change.  When I signed up back in the fall (you know, when it sold out in a little over thirty minutes), I registered in the Open Male class.  Just a little over a week ago, I had a change of heart.  Instead of riding gears and plush suspension for six hours, I requested that my category be switched to single speed.  That request was easily granted, so I’ve begun making preparations to ride my fully rigid, one-geared machine, the Falcon.

In an effort to make the “race” a little less painful, I decided to remove my local trail-friendly 18 tooth cog and replace it with something a little more endurance-oriented.  Since the largest I had was a 20, I got in touch with Shanna from Endless Bikes to see if I could get something in a hurry.  She saved the day, and quickly sent over a shiny new cog hot off the presses. 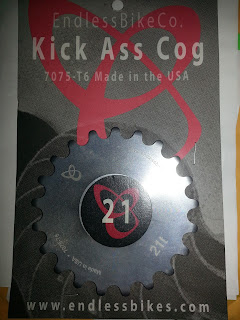 It doesn’t really look that big (or like it will be any easier.) 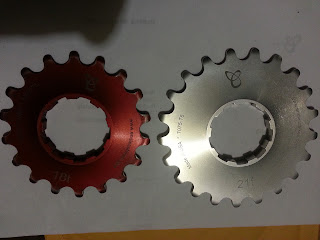 Nevertheless, I put it on, and I’m hoping like hell that those three extra teeth will help me last for six hours.  While I was at it, I tore my whole bike apart to give everything the “once over.”  I still had a little bit of dirt in odd places from my race down in , so I cleaned the hubs, headset, and completely disassembled the crankset and bottom bracket stuff to make sure everything was clean.

I also took the time to install a brand new chain. 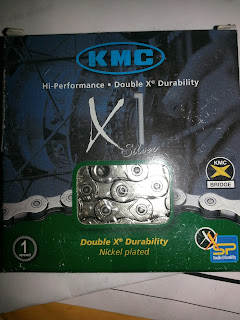 While I’m not a newcomer to KMC chains, I’ve never tried this one before.  I usually ride the 610, which is pretty bombproof (and heavy.)  I’ve had good luck with it so far, but I got this new X1 for practically nothing so I thought it might be worth a shot.  What better way to test out new shit than in a race, right? 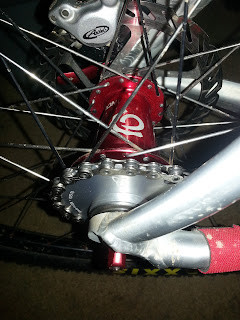 Let’s hope my legs are up to the challenge.

See y’all next week with some kind of report.