I think my road riding is getting out of control.  I mean, I actually enjoy it now.  I’m riding on the road more and more and having a good time doing it for some reason.  Perhaps an intervention is in order.

Since it’s football season here in ‘Merica now, my Sundays are booked from 1:00 p.m. until late in the evening.  While this is pretty much the only television I enjoy watching, I don’t enjoy the fact that I can’t ride my bike all day.  Well, I can I guess.  It’s a choice I’ve made.  Anyway, I figured that the only way I can get in a good ride before foosball starts is to put in some road mileage.  Rather than go at it alone, I invited Little Miss Sunshine to come along.

“How far are we going?” she asked.

“Maybe fifteen to twenty miles” I replied, knowing that I was full of shit.

She bought it and we hit the road bright and early Sunday morning. 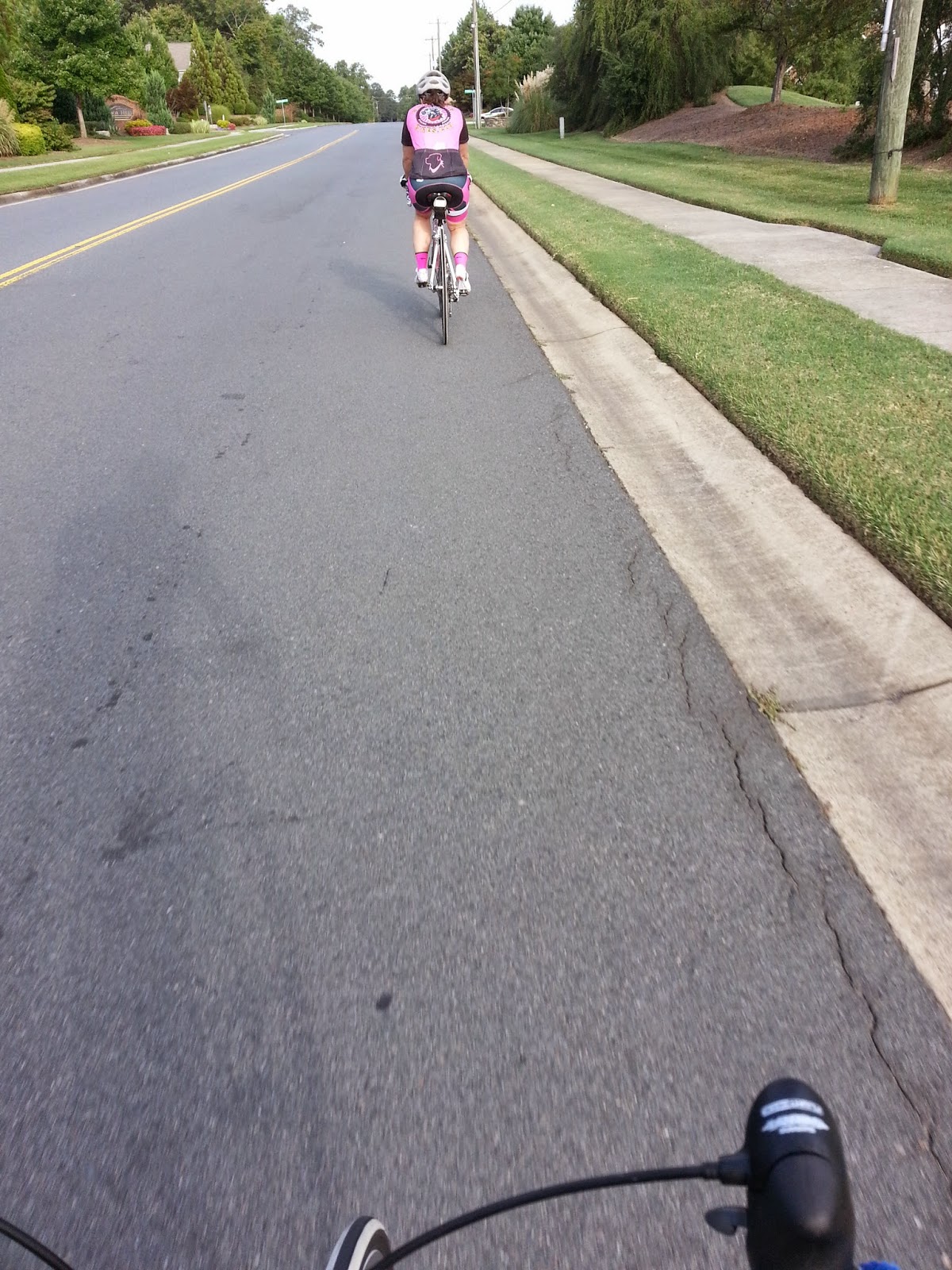 She wasn’t the only victim though.  The night before when we were hanging out with TomTom, we started talking about our ride and he mentioned that he had borrowed a road bike.  “Awesome”, I thought.  We invited him to join us, and after a short ride from our house we uh, picked him up.  He is borrowing a single speed road bike, complete with flat pedals (he doesn’t believe in being clipped in.”  We rolled out from his house, and to make things fun, we took a not yet traveled path through a construction zone. 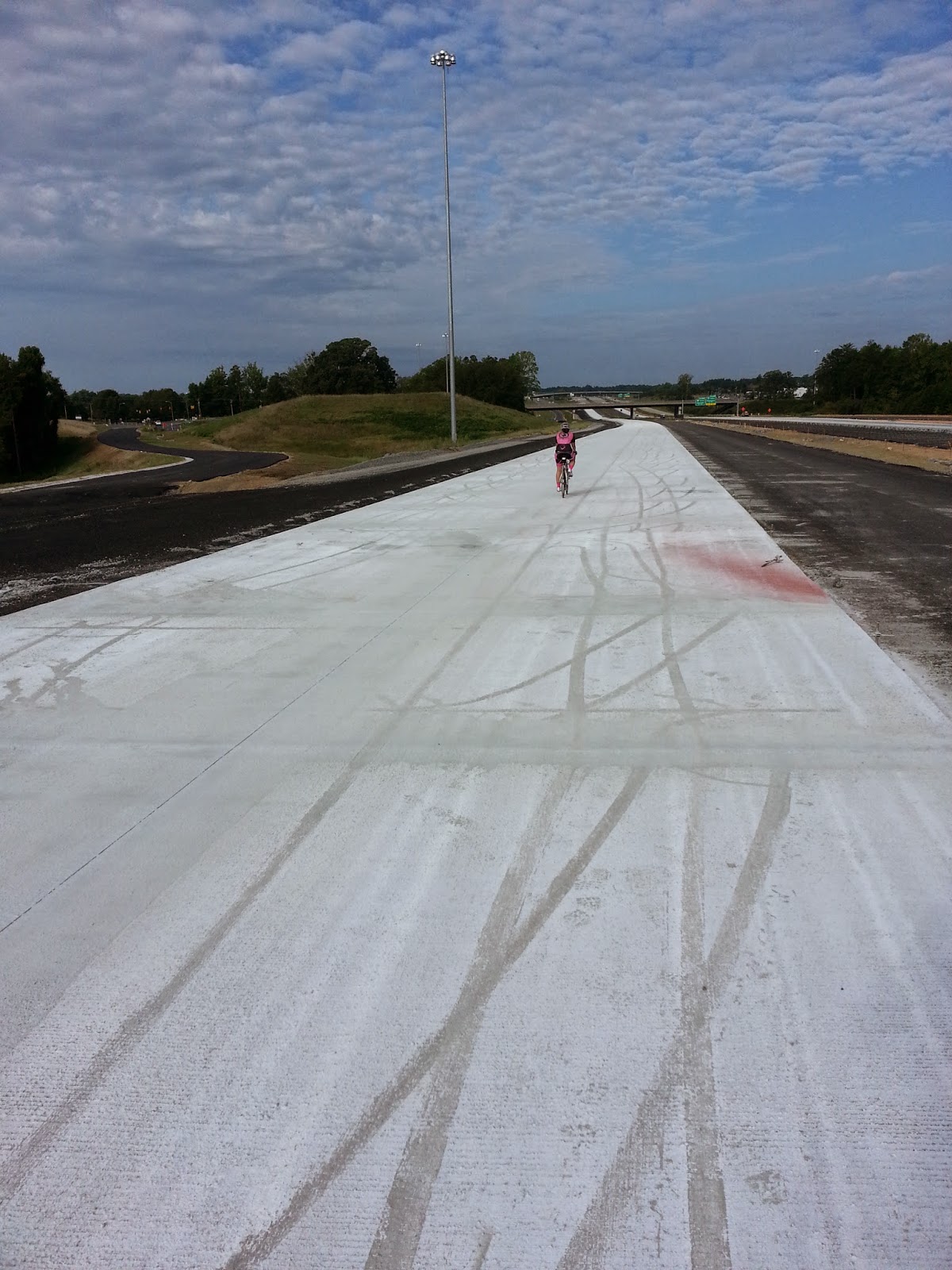 It was nice having zero traffic around.  I thought it would make TomTom comfortable on the ride, since he’s not used to all this roadie shit. 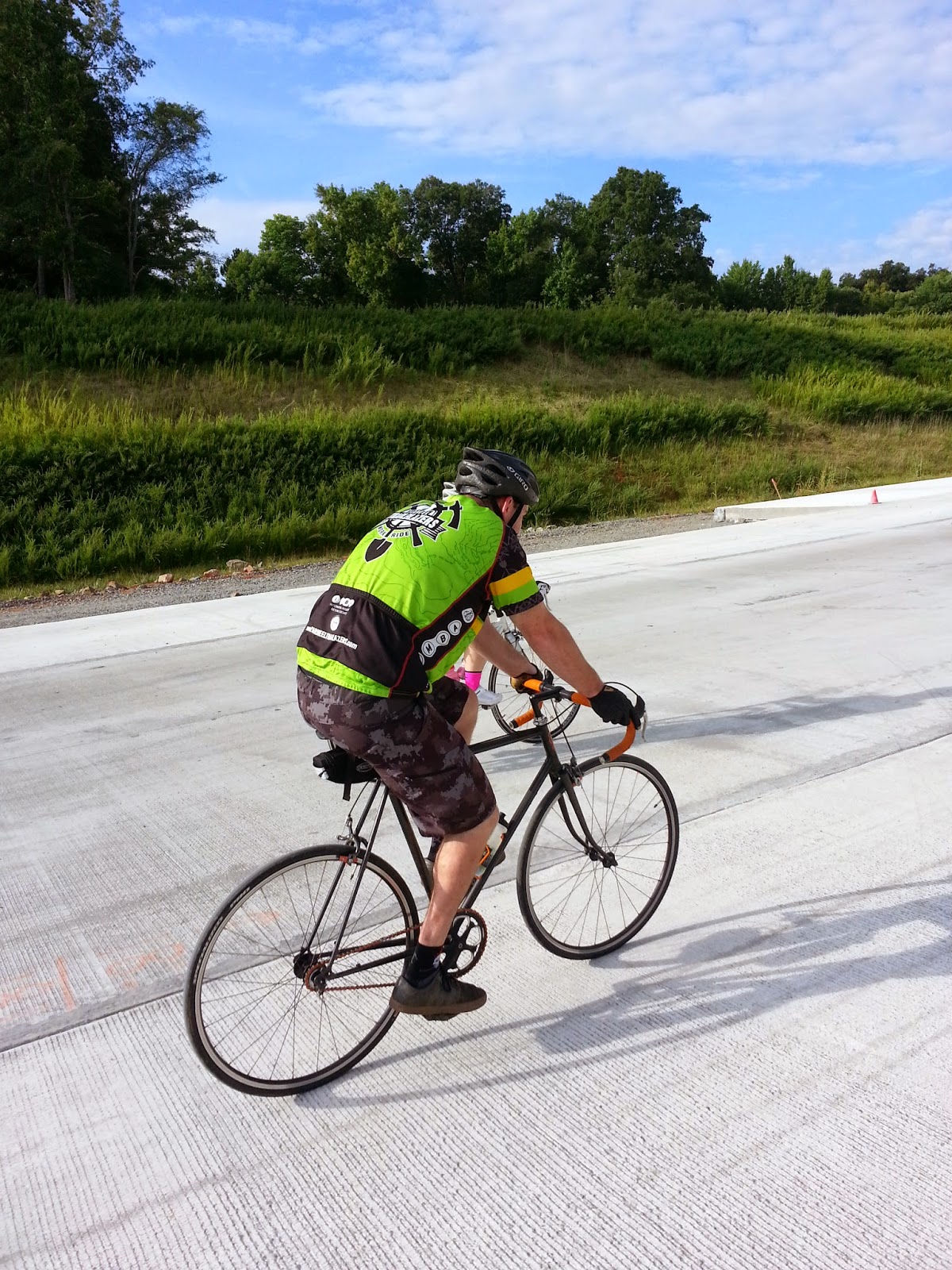 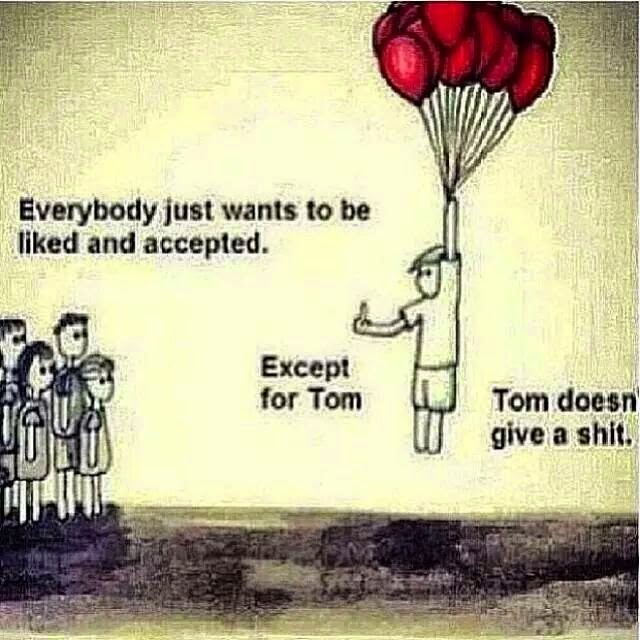 Anyway, after a little tour of the soon to be new Interstate loop, we headed for the hills.  Not the real hills (as in Pisgah), but the hilliest neighborhood around.  I wanted to get in some climbing for uh, training purposes.  There are a few tough climbs along the route I picked, and TomTom rode them like a champ with his one, tough gear.  It kinda made me feel like a douche for riding gears.  My road bike is the only geared bike I have left though.  Perhaps I can change that.

So we made it through some steep hills, with one in particular that was leg burning.  We hit the final stretch, which was a gradual climb back towards the main road.  I let the single speed roadie take the lead. 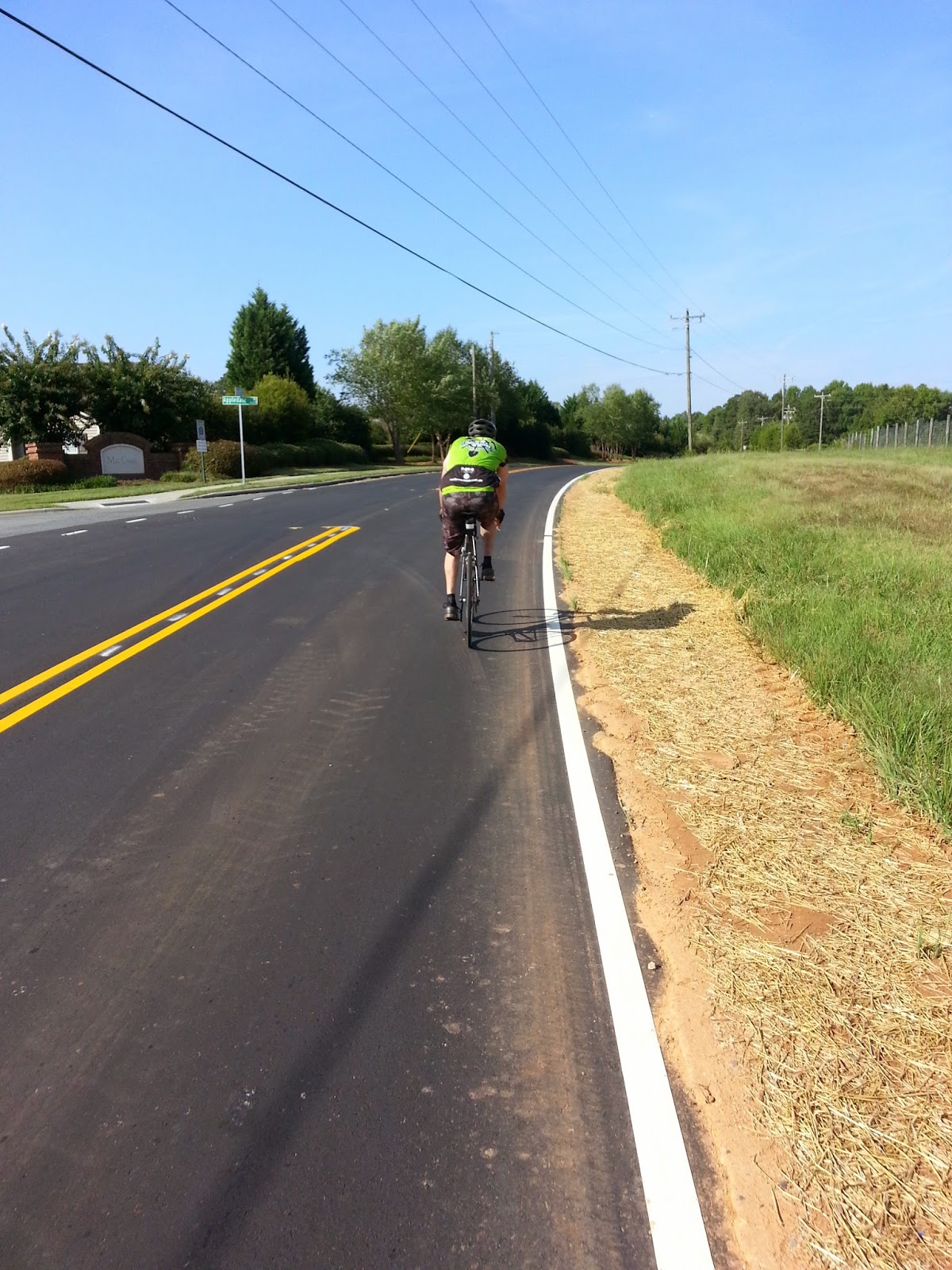 And the little lady wasn’t too far behind. 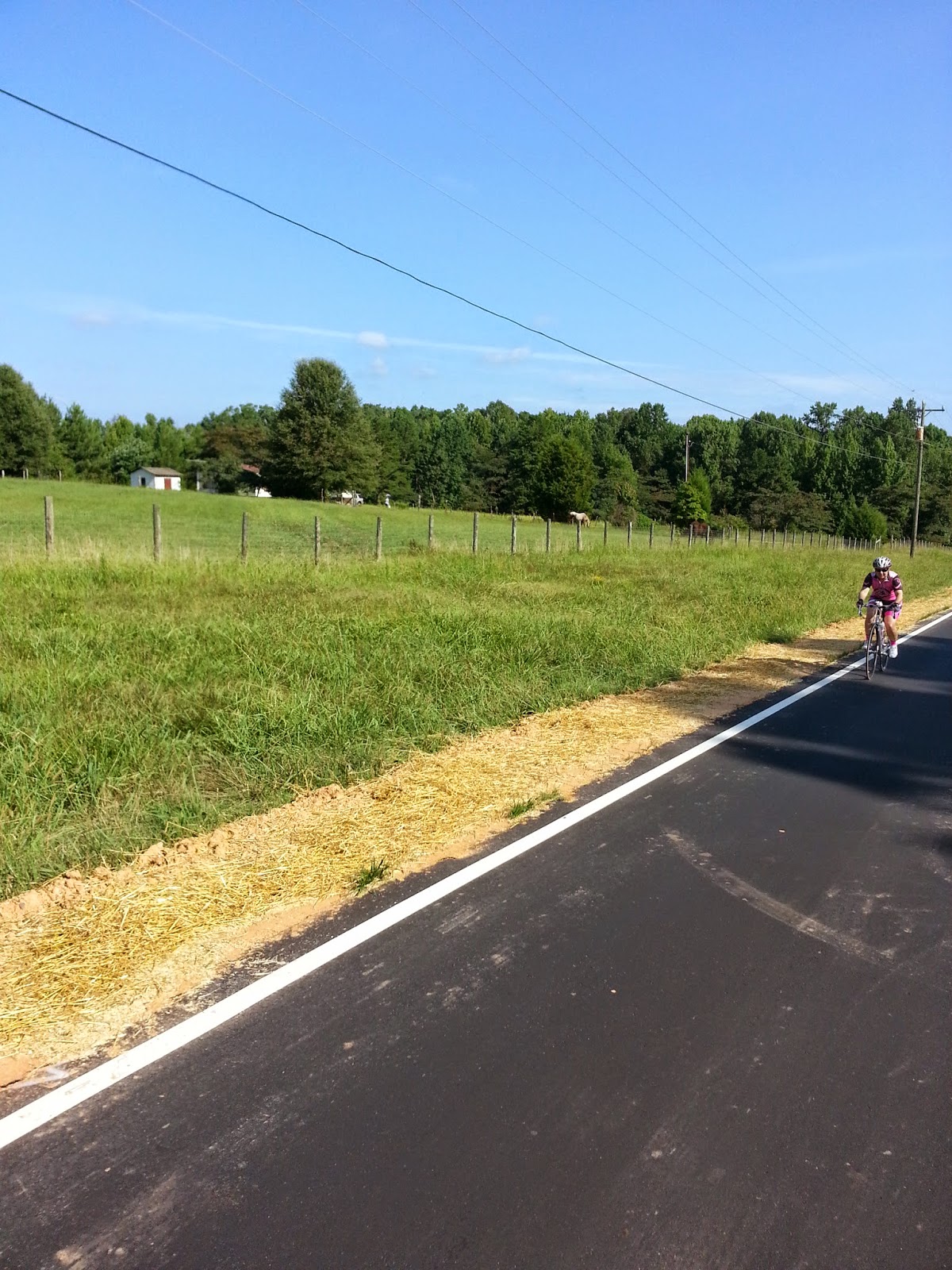 Even though it was fun for the most part, some of it was a little tough.  I felt good getting out for a ride so early though, you know, pedaling a little bit before I did practically nothing for the rest of the day.  We ended up with almost twenty seven miles, which for a road ride isn’t really too much.  I enjoyed it a lot, but mostly because I had company. 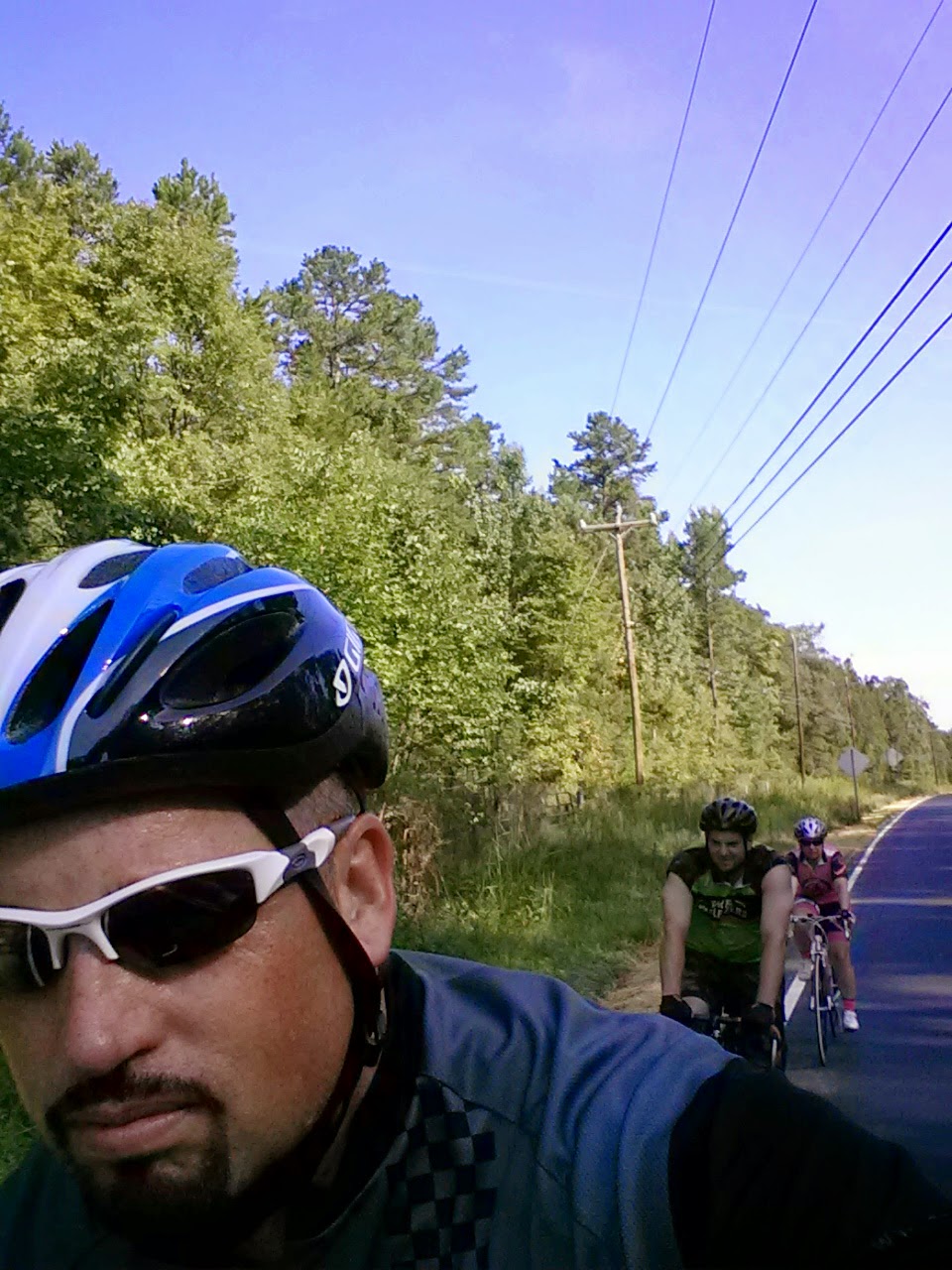 Oh shit, is the beginning of a regular roadie group ride?  I don’t even know who I am anymore.

Hey Eastwood, aren’t you healed up enough to ride around on skinny tires?
Posted by TheMutt at 8:42 AM