I'm off the bike for a while.  You already know this.  As much as I really want to ride (anything, even a short trip to the store) I can't.  Saturday was a pretty nice day though, and staying inside wasn't really an option.  So I did the next best thing...

I went to watch a bunch of roadies ride around in circles: 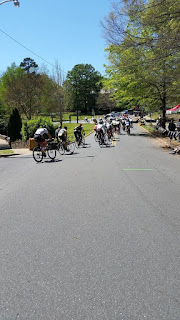 The 43rd annual Dilworth Criterium was held over the weekend, and it's actually pretty fun to watch.  And yeah, it is just a bunch of guys and gals riding around in circles.  However, the course is pretty difficult and it is fun to watch. 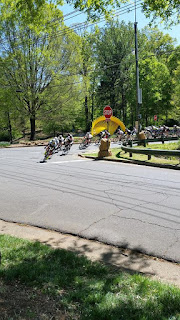 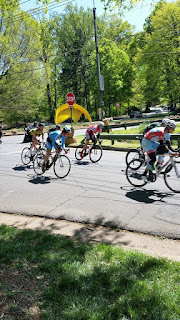 There was heckling too.  Not much by me since it hurts to yell, but other folks were giving the riders a (friendly) hard time.  That was cool since most of them can't take it, and probably thought we were what's wrong with this sport.

It wasn't just about watching people ride bikes in circle.  A lot of my plan for the day was to hang around normal folks.  You know, bike people. A lot of my friends come out to watch this stuff, and seeing everyone keeps me from getting into a funk about being injured.  My normal bike peeps all understand, and they a great to hang out with fo sho.

Yeah, normal folks like my man Nick, dressed in his finest kit. 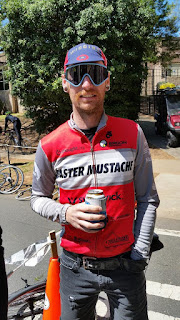 That made my day.

I spent a pretty nice day outside and had some good times with good bike friends.  The only thing that would've made it better is if my day had ended at the beer store. 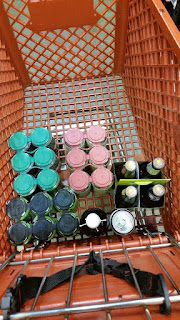 Liquid medicine for my injury.  I'm winning the recovery game.

"That was cool since most of them can't take it, and probably thought we were what's wrong with this sport.". LOVE it. What a DB he was. Get better buddy.