No Race For You!

Well, I didn’t get to race at the U.S National Whitewater Center yesterday, which was the last double points race of the Charlotte Mountain Bike Series (the last few races are make-up races.) Mr. Lunchbox is trying out for the football team at his middle school, so he needed a ride home from practice. Little Miss Sunshine usually helps with this, but she was on call for the hospital in case someone had a heart attack. Lunchbox needed to be picked up at 5:30, which would have given me only 45 minutes to drive all the way across the county, change my clothes, and be at the start line (with no time for a warm-up.) I don’t mind, because I’m happy to see him trying out for football. He’s a big kid and a huge football fan, so it seemed natural. On the other hand, he does like going to the races, so he was a little sad about missing one.

My big concern now is if my 8th place overall standing is in jeopardy. There are no results yet, since there is also a make-up race scheduled for this evening. I suppose I will have to tear up the course tonight to remain in the top ten overall. That was my goal at the beginning of the season, and it’s nice to see that it is within sight. I’m sure one race won’t make too much of a difference. I hate that I missed a race, but maybe I’ll have an advantage over the guys who raced last night.


On another note (and since it’s a slow day), I figured I would talk about the Great Brake Fiasco. A while back, my good pal Dirty Party Cycle decided to join the hydraulic disc brake revolution, after nearly 10 years of faithful service from cable disc brakes. He went all out, purchasing a nice set of Hayes HFX 9 XC Carbon/Chrome Disc Brakes (Limited Edition 10th Anniversary even.) The set arrived at his house, and he took a trip to my house so we could install everything. He had previously installed the 7 inch rotors, so this was going to be a breeze. All we had to do was mount everything up, tie off the cables, make a few small adjustments, and he would be stopping on a dime. The brakes are supposed to come pre-bled, so no muss no fuss. After getting everything on the bike, I noticed that there was hardly any stopping power. Turns out that there was a severe lack of quality control, because the bleed plugs had been left out, causing most of the fluid to leak out. There was a small amount in the bag, but not enough to cause any concern, so we thought.

A sad, disappointed DPC had to call them up to explain his issue. They advised him to return his faulty items and they would ship out replacements. Another week and a half of waiting later, new stuff arrived. The front brake was tip-top, while the rear suffered the same deficiency as the last set. At this point he’s pretty pissed, so he has to call them yet again.

DPC: “Send me some brakes that work!”

Customer Service: “We can’t do that until you return the defective item.”

DPC: “I don’t think you get it. Let me break it down for you. The path of the righteous man is beset on all sides by the inequities of the selfish and the tyranny of evil men. Blessed is he who, in the name of charity and good will, shepherds the weak through the valley of the darkness. For he is truly his brother's keeper and the finder of lost children. And I will strike down upon thee with great vengeance and furious anger those who attempt to poison and destroy my brothers. And you will know I am the Lord when I lay my vengeance upon you. Now listen here Mr. Customer Service. I been sayin' that shit for years. And if you ever heard it, it meant your ass. I never really questioned what it meant. I thought it was just a cold-blooded thing to say to someone before you popped a cap in his ass. But I saw some shit this mornin' made me think twice. Now I'm thinkin': it could mean you're the evil man. And I'm the righteous man. And Mr. .45 here, he's the shepherd protecting my righteous ass in the valley of darkness. Or it could be you're the righteous man and I'm the shepherd and it's the world that's evil and selfish. I'd like that. But that shit ain't the truth. The truth is you're the weak. And I'm the tyranny of evil men. But I'm tryin, Mr. Customer Service. I'm tryin' real hard to be the shepherd. So just send me some good brakes, okay?”

Customer Service: “Okay sir. We’ll overnight you a new one.”

Aside from the fact that most of that conversation is inaccurate, it’s pretty much what happened. So, now it looks like the replacement brake will be here on Friday. Hopefully we can get everything installed soon. I’d hate to see the DPC get all medieval on them. 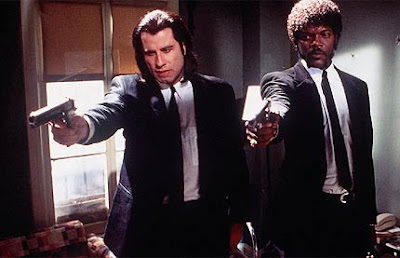 “They keep sending us bad brakes. We should have shotguns for this kind of deal.”
Posted by TheMutt at 10:18 AM

Some people may be offended by your Pulp Fiction reference. I, however, found it funny. Nice post today, keep it up.

Thanks, but there is far worse crap on the Internets to offend people. I'm just trying real hard to be the shepherd.