Head For The Mountains 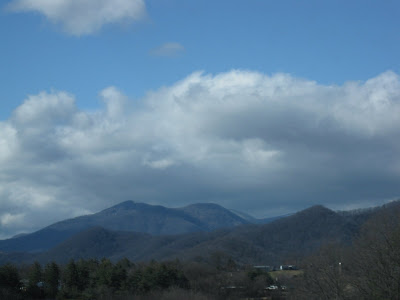 That’s exactly what Lunchbox and I did on Monday. It was time to high-tail it out of Charlotte and take a trip out west. The North Carolina High Country was calling, and we answered. This trip was more than just getting out and enjoying the mountains though. For me, it was a chance to escape normal life for a day and get a little rest and relaxation. We left the B-43 World Headquarters bright and early and we were westbound and down (just watch ol’ Bandit run.) 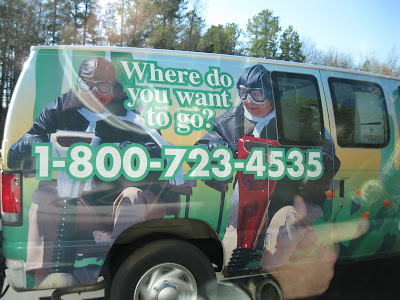 We saw some weird stuff along the way, with the above photo being the funniest. I had no idea that elderly folks took their scooters so seriously. Anyway, this trip wasn’t all about fun and games. This is the part of the trip that was the “super-secret” mission. When we got into the mountains, we took the exit for Fletcher, NC , and made a stop to see my new friends at Cane Creek Cycling Components. 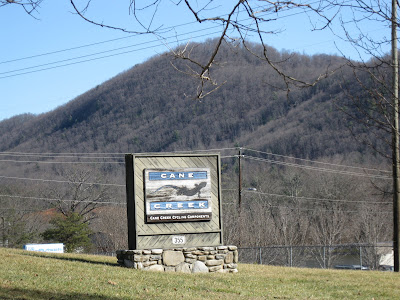 My friend Jason was kind enough to invite us over for a tour of the facility, and I worked it into my schedule (actually it was the first thing on the agenda that day.) I pulled into the parking lot and looked around for a moment. The building looked small on the outside, and it was rather unassuming. We parked and headed to the front door to make our presence known. 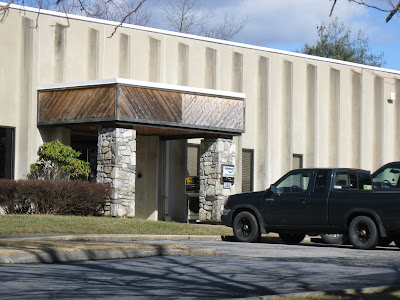 We walked into the front lobby where we were greeted with numerous awards and other Cane Creek branded paraphernalia. I spotted a telephone on a little table and picked it up. I dialed the operator and we exchanged a few words:


Operator: Cane Creek Cycling Components, can I help you?

Me: Hello there. This is TheMutt from the world famous B-43 blog. I’m here to take a tour of the facility.

Operator: Yes sir, we’ve been expecting you. Please wait while I send someone up to get you.

Lunchbox and I waited for a few moments until Jason came to get us. I haven’t seen him in a few months, although we have been in communication via e-mail and social networking sites on the Internets. He welcomed us to the facility and had us follow him inside.

We walked into a giant room filled with parts, boxes, and boxes of parts. There was a lady sitting at a table, and she was putting Cane Creek headsets into packages. I was amazed that there wasn’t a room full of giant robots for that. Jason informed us that they do all of the packaging by hand, and he proceeded to show us some other parts and their packaging as well.

While we were walking around, he gave us the lowdown on the history of Cane Creek Cycling Components. I’ll try my best to sum it up. Back in the 70’s, a major Japanese brake manufacturer called Dia Compe opened a U.S.-based facility in Fletcher, NC. They provided brakes for bicycle manufacturers here in the United States. In the late 1980’s to early 1990’s, Dia Compe teamed up with the folks at RockShox to market suspension forks. The components were produced locally in Asheville, NC. Around that time, Dia Compe became involved in licensing the Aheadset threadless bicycle headset.


Around the middle of 1990, the Cane Creek name was born. It was named after the road on which the building was located. Jason told me that there is also an actual creek called Cane Creek nearby. They also started producing rear shocks and manufacturing wheels shortly after this. We walked over to the wheel department and I learned something else. Each wheel from Cane Creek is assembled and trued by hand right there in the building. I was told that the design of the wheel made it impossible for a machine to assemble them. So, if you buy a set of Cane Creek wheels, rest assured that they are hand-assembled and inspected by a live human being. It's hard to find that kind of workmanship anymore. You had better hurry though, as Cane Creek is getting out of the wheel business. They are closing out the wheel in their inventory at ridiculous prices. Check out their website for more info.


As the tour continued, we headed over to the shock department. It’s there that they build each one (again by hand) and test them to exact specifications. Even if you send one back for repair, it goes through the same process. Across the way from the shock station was where the headsets were made. The aluminum used in the 110 Headset is purchased locally and made on the premises. They send them out to be annodized and laser-etched with the logos, and then they are packaged in house. They sure do a lot there for such a small facility (it's bigger than it looks on the outside.)


We walked to the back of the building, which was full of inventory. I got the lowdown of several products, and that’s where I got to meet a few of the employees. First was Nancy, who packages each order to send out to customers. If you order anything from Cane Creek, Nancy probably sent it to you. She made sure that Lunchbox and I walked out with some water bottles and stickers. Please remember to thank Nancy every time you receive a package from Cane Creek.


We walked around to the office section, where we got to meet some of the sales-types. I met Chris, who is the newly-hired Director of Domestic Sales. Then there was Gary. Gary is the sales-guru and all around knows-everything guy at Cane Creek. If you have a problem or a question, chances are you have talked to him. He is a sharp dude. Coincidentally he’s the one who hooked me up with the short-sleeved jersey I got a while back. I also got to see some of Jason’s work. He showed us a lot of ads for cycling publications that are in the works. Neat stuff. Look for his ads in an cycling magazine near you.


That pretty much concluded our tour. We walked outside and talked a bit about upcoming changes at Cane Creek (I can’t spill the beans just yet), and also discussed general bike industry stuff. We really had a great time there, and it was very interesting to see a local bike component manufacturer up close. I am very grateful to have the opportunity to represent these guys, especially after seeing how they do business. Big thanks to Jason for having Lunchbox and I over there for the day.


We capped off the day off by doing a little snowboarding in Maggie Valley, NC, just up the road a bit. 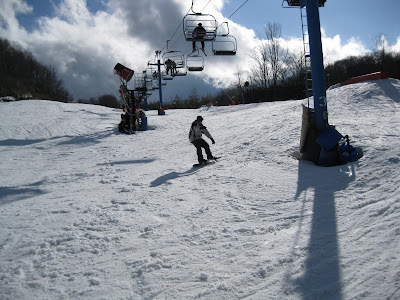 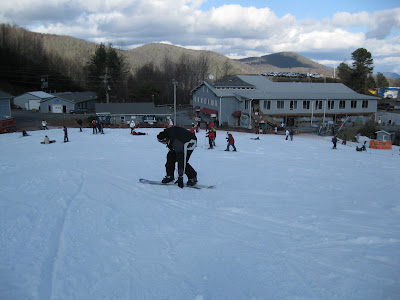 Although the snowboarding was fun, I think the highlight of the day was our visit to Cane Creek. We talked about it all day. Although I didn’t take many pictures there (I was too busy being “wowed”), I will have long-lasting memories. Do you support Cane Creek by using their products on your bicycle? You should. If not, go buy some stuff right now. I’ll wait.
Posted by TheMutt at 10:14 AM