Yes my friends, it has been a while since I last rode this hardtail beast. As much as I hate leaving the comfy confines of my full squish bike Goose, I really needed to get some saddle time on the bike that I plan on using for the upcoming race series. The first ride I had on it left me hurting, but I figured that was from the malfunctioning fork I so hastily put on it. Since I received a new fork for Goose by way of the Christmas holiday, I was left with a slightly better front appendage for the short track bike. After measuring it several times though, I had my doubts as to if it would even fit on there. The head tube on that thing is freakishly large, even more so than it should be for an extra large frame. I thought that since I was going to swap things out, I might as well grab a new stem as well. I was pleased to find a new Easton EA50 stem waiting at the B-43 World Headquarters when I arrived there on Friday evening. 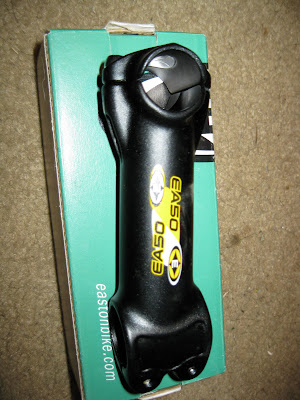 I thought that maybe this new stem would help with the stack height issue I may run into, but it was the exact same size as the previous generic stem I was using. I decided to at least make an attempt at swapping out everything. I would have a shiny new stem even if the fork didn’t fit on the bike. I grabbed the fork so it could pose for a photo. 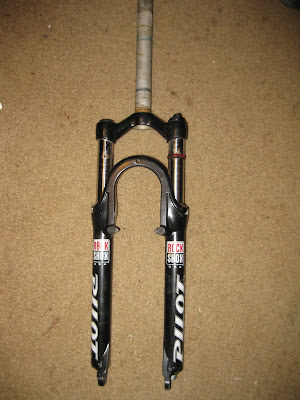 Do you remember that old faithful suspension component? Although it made a weird noise when I rode it, it actually did function properly during my many rides with Goose. I quickly started tearing everything apart to get ready for the install. 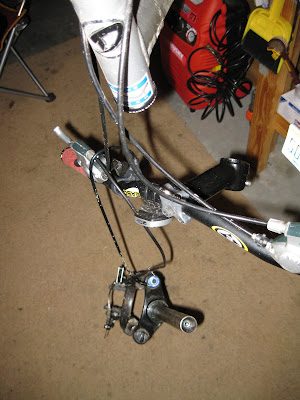 After a quick fit check, it looked like I would be cutting it really close. The previous piece o’ shit RockShox Dart 3 had a steerer tube with only about ½ an inch cut off, and it was still a tight fit. I only had to use two small spacers when I installed it. When I removed the crown race from the Dart and put it on the Pilot, I proceeded to check the fit. The steerer tube was a hair under 9 inches, and it just barely fit (with no spacers.) Even the new stem didn’t help me gain any additional clearance. I was a little concerned about the fit (and my comfort), but I quickly realized that it didn’t matter. It was a short track bike after all, and my comfort shouldn’t be a concern. I wouldn’t be riding great cross country distances on it or anything. My only concern at this point was to have a functioning suspension fork to ease the pain from the bumps. I put everything back together took the standard “in front of the house” test.


Everything seemed fine with my positioning, but it was a bit awkward. I would have to get used to it. With the start of the 2010 Winter Short Track Series closing in fast, I needed to take it out right then and there. Riding in front of my house simply wouldn’t do. I figured I needed a real ride to get used to the new feel of this bike. I loaded it up and headed out to ride. 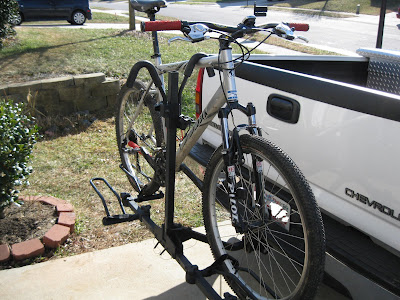 I skipped the obvious choice of riding the actual race course and I headed over to the local favorite, Sherman Branch, to do a ride that would be a bit longer than the actual race. The trails at Sherman are more technical than the race course at Renaissance, and that would be a good introduction to my new bike fit. I could push myself and obtain high speeds, so I thought it was a perfect choice. As I told you before though, it was cold. 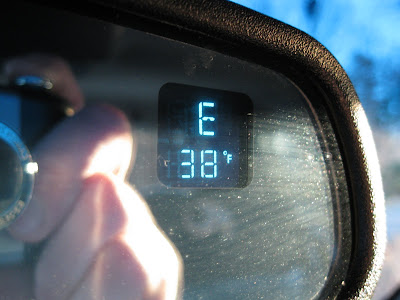 When I got to the parking lot, I saw several riders finishing up their trail sessions. Their bikes were covered in mud, much like mine was last week when I rode there. One guy even commented that the trail should be closed. Hogwash, I say. If the gates were open, then I was riding. The amount of mud I saw on their bikes was trivial, since it looked like I had a bit more than that when I rode there last week. I got dressed in my cold weather gear (minus the hand and feet warmers), and I was ready to go. Before I hit the trail, I ran into one of our local Trailblazers, and he gave me the lowdown on the trail conditions. He said that it wasn’t really that bad, but it wouldn’t be a walk in the park either. Good. I was hoping for a challenge. I needed to work hard on this ride to get a good feel for the bike that I would try to race next weekend. Nothing like waiting for the last minute, huh?


When I headed out, I was already cold. For a moment I regretted my decision to go sans warmers, but it was too late to turn back. I started out at a medium pace, which was party because I needed to warm up. The other reason my pace was slowed slightly was the fact that the beginning of the trail was slippery. I didn’t need to crash or anything like that.


After the initial slop, the trail wasn’t really that bad. I was able to pick up the pace and really see what this short track bike could do. I nearly crashed into several trees at first, but I became one with the bike over time. The awkward riding position took some getting used to, but eventually I was able to corner it efficiently. Even though the trail was in less than ideal shape, I still managed to complete it in a few seconds under an hour. I didn’t get too winded either, but I was riding far slower than “race pace.” When I got back to the parking lot, I was pleasantly surprised to see just how little mud I had accumulated. 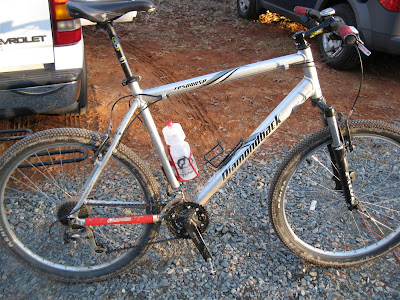 I guess we’ll see what happens when I race next weekend. The bike performed well, and the climbing efficiency was much better than on a full squish. Climbing has always been a weakness of mine since I am a heavier racer than most, so any help at all in that regard is surely needed. I had a hard time really going all out at Sherman, but that should change when the race starts. There is always an adrenaline rush during these events, and I’m counting on it. I haven’t ridden competitively since October, so I have a long way to go. Racing superstardom cannot be achieved at the beginning of the season, can it? Hopefully I can hang in there and at least finish in the middle of the pack. It could very well be an ass-kicking for me though. Oh joy.
Posted by TheMutt at 9:47 AM