I Need To Put In Some Work

With all of my bike issues, knee problems, and whatever else has been going on, I haven’t been getting in good mileage on the bikes lately. My 29er, The Big O, will be back in working order within a week or so (more on that later). The knee is feeling better, so maybe I can spin a little on the road bike to bring my strength back up. The good news is, beer consumption hasn’t declined one bit. I’m still taking in the same amount of hoppy goodness as before, but the exercise level has surely declined. Wait, I guess that’s not so good news. Shit. Even my latest take out order of Chinese food tried to give me a big hint:

Yeah, I know, Mr. Anonymous Fortune Writing Guy. Thanks for the info.


So, what can I do? Doing nothing sounds good right now, but that damn fortune cookie won’t get out of my head. I keep telling myself that this “down time” is good for me, especially since I have a potential season-ending knee ailment. Since my primary race bike is currently out of order, this would be a good time to get my knee right. That much is a given, but there’s more. I could use this time to get the rest of the fleet in tip top shape, which would probably be the wise thing to do. Since I figured out why I was breaking frames, now at least I can focus on the mechanical parts of all the bikes around here. I guess it will be kinda like starting from the beginning: 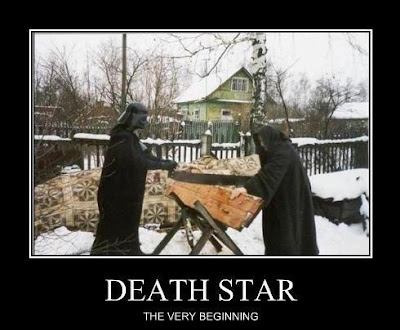 Yeah, I know. I always like to squeeze a Star Wars photo or some shit like that in here. It’s my thing, so I do it. Anyway, it looks like I may be spending a little time on the road bike trying to rehab the knee. Even though it feels better now, I can’t risk another injury. Since I really don’t enjoy the road bike that much, I’ll probably mix in some mountain unicycle action too. At least thatway I can build my leg strength back up some.


When it rains, it pours. That shit is so true here lately. I killed a couple of bikes, had multiple flats, shit has been falling off of my bikes, and to top it off my knee decided to fuck with me. Isn’t life grand? I’ll blame it on the bicycles, since they seem to be the cause (and solution) to all my problems. 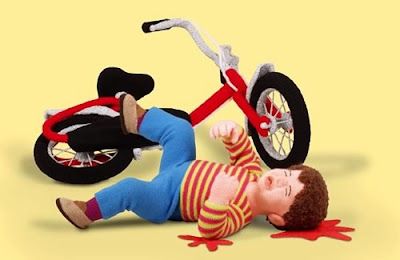 Okay, I’ll come back tomorrow a little less whiney. In fact, I actually have something coming up that I can talk about tomorrow. Finally.
Posted by TheMutt at 8:34 AM