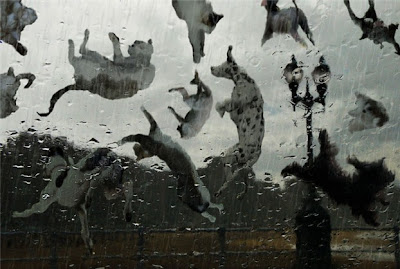 How do you know when it’s raining cats and dogs? You step in a poodle. (Thank you folks, I'll be here all week.)


Yeah, it’s that kind of day. After over a month of no rain, we’ve been hit with a shitload of the wet stuff around here in Charlotte. I guess we need it though, especially since the trails have been dry and dusty for far too long. The sad news is, I haven’t been on my bike in a few days. I got a chance last Saturday to go mountain biking at Sherman Branch, and Sunday of course I got in a few miles on the road bike during Little Miss Sunshine’s triathlon. That’s not nearly enough for me.


Tonight was supposed to be another night ride at the U.S. National Whitewater Center, but I can’t do that for reasons other than the fact that there is rain falling from the sky. Yes, I’ve had yet another mechanical-type setback. Back before I went tubeless, I suffered many flats (the main reason I converted to tubeless.) One of those flat tire times I kept riding, which caused a little damage to the tire bead that I knew would come back to bite me in the ass.


On my trip to The Big Sherm da udda day, my fears were realized near the end of the trail when I heard the sound of air leaving my rear tire. Shit. After a close inspection, I saw that the air was escaping from the area between the bead and the rim, which wouldn’t stop no matter how much Stan’s fluid flowed through in a vain attempt to plug the leak. I ended up walking out, which wasn’t bad since I was close to the exit. Even though I was equipped with a fully loaded Awesome Strap, I didn’t want to waste time and money by putting in a tube and using my CO2 inflator. I’ll save that for my pathetic attempts at racing. The bad part was that I had to find a new tire, and fast.


I called one local shop, but they didn’t stock my favorite tire, the 29er Kenda Small Block 8. They offered up some “similar” tires, but since I have OCD, I can’t run two different tire types on my bike. I stopped in another local shop and they didn’t stock them either. They offered to order one for me, but I can do that just fine by myself. The MadSS even offered up one of his many spare tires to get me going again, but he also knew that I couldn’t accept because of my inability to run two different tires. I decided to peruse the Internets to find a tire that would get here in time for the Tree Shaker 12 Hour Mountain Bike Race.


I used The Google, and I was overwhelmed with the search results. Just then, I remembered that I had been wanting to try to order something from the folks at Bike29, especially since I’ve heard a few good things about them. Also, Little Miss Sunshine had made one of her almost-famous “Genital Non-Displaying Devices” for the proprietor, George, so at least I wouldn’t get anyone’s junk residue on my new tire. After finding the tire on their website, I clicked the order button and waited. The next day I received this e-mail:

The comments for your order are:

We are currently out of the country, and will not be processing any orders until we return on October 1st. Thanks for you patience.

Your order has been updated to the following status.

Please reply to this email if you have any questions.

Damn. It’s my own fault though. I regularly read their blog, and I remembered that they mentioned this a while back. I’ll survive though, since the tire will still arrive in time for me to mount it up for the Tree Shaker. The bigger problem though, is that I won’t be able to ride my big wheels until then. I may have found a used tire locally (Small Block 8 of course), but there could be some logistical issues with me picking it up. I guess that means I’m still searching, and hopefully I’ll find something in the meantime.


I have faith in the folks at Bike29, so when the new tire gets here it will be replacing whatever used piece of shit I temporarily put on my bike. It will all work out in the end I’m sure. When it’s all said and done, I’ll have a spare tire in case this happens to me again, and I’m sure it will. Half the shit I talk about around here has to do with my equipment malfunctions, so I wouldn’t wanna change that, would I?


See you tomorrow for more mindless drivel.
Posted by TheMutt at 9:34 AM

I never run two different tyre types. That would be stupid.