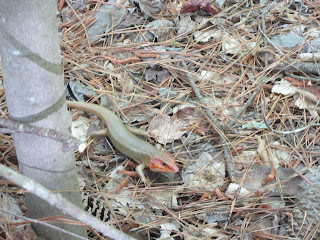 Lunchbox saw some cool critter out there in the forest.

I have a stupid meeting at work this morning.  Well, they’re all stupid.  Anyway, that means I don’t have a lot of time to write a lengthy race report.

I raced down in , and it was pretty fun.  Well, until we shot off the line at the start.  We rounded the corner on the gravel road, and one guy wiped out and took a few others with him.  I narrowly avoided the crash, and thanks to my conservative pace I was right with the front of the group.

Less than a half mile in though, I heard something rubbing on my tire.  When I tried to pedal, I wasn’t going anywhere.  I looked down and saw that I had dropped my chain.

At that very moment, I wished I had my single speed.

As I struggled to put my chain back on, I watched as most of my class rode by.

I had a long way to go to catch up, since there was a lot of racing left.  I wouldn’t quit though.  I don’t do that shit.  I’m not that serious about this whole racing thing, but I don’t give up.  I guess I’ll fill you in on the rest of the details tomorrow when I have a little more time.

Oh yeah, Little Miss Sunshine raced yesterday too.  She ended up fourth in her class.

Not bad for never riding there before. 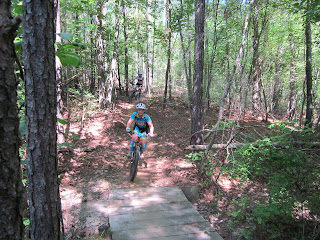 And, she ended up on the podium for the South Carolina State Championship:  third place.

I think she’s getting pretty good at this racing stuff.

I’ll be back tomorrow to figure that out.