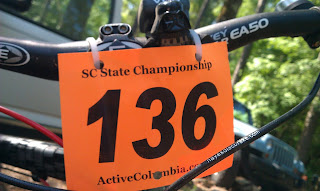 What is thy bidding, my master?

The fact that I dropped my chain at the beginning of my race on Sunday really pissed me off, since I was feeling pretty good about my chances out there.  I had to keep going though, and keep going is what I did.  After getting the chain right I hopped back on the bike and pedaled my ass off, and slowly started reeling in the people in my class.  I was riding like I’ve never ridden before. 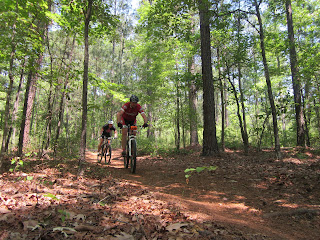 One by one, I was picking them off.  I would get behind one of them, ride for a bit, then mash up a climb to get by.  I would ride as fast as I could to put in a gap, then set my sights on the next one.  It was really difficult to use my energy to do this, but I really had no choice.  It was somehow working though, and I actually didn’t feel bad.  I had one minor mishap, squishing my hand between a tree and my handlebars because I wasn’t paying attention.  That didn’t set me back too much though.

I never got passed again by anyone I overtook, except for one guy that blew by me.  I never saw him again, and wondered how he got away so quick.  I still rode my ass off though.

Lap one was a long one, and I eventually got through it fairly quick.  When lap two came around, I was gunning to get back in podium contention.  We would avoid much of the tough stuff on that lap, but I kept thinking that I missed the turnoff and would end up riding it anyway.  I felt like I was lost.  When I finally saw the volunteer standing there between two signs, I knew I was almost finished.

I gunned it on the flat section, eventually getting on a long, but not very steep fire road climb.  I hit the last section of singletrack, and once again my kid was waiting in the bushes to capture the action. 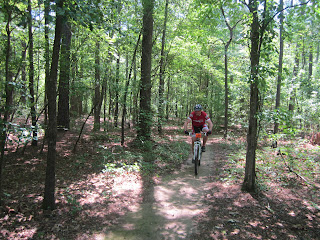 I was smiling this time, at least.

I was home free, but I never did catch the leaders.  Later on, I found out that I ended up in 7th, which I didn’t feel was too bad after having a mechanical issue.  I had one of my best races, even though I didn’t get on the podium.  I’m not usually the winning type, but I do always ride as hard as I can.  Not bad for someone who doesn’t train or take this shit too seriously I suppose.

As for the dropping chain crap, I have a fix for that.  Since I plan to keep racing the geared (1X9) bike the rest of this series, riding the single speed is not an option right now.  Instead, I plan to get rid of that shitty Third Eye Chain Watcher and find something else.  Yeah, I know Dicky told me that it was a piece of shit, and I guess I just now realized it.

I’m now moving on to something better: 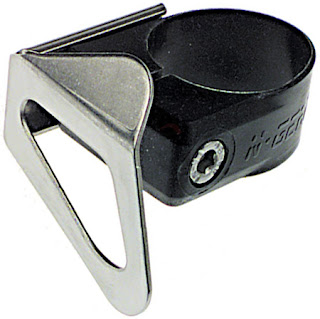 The N-Gear Jump Stop chain guide is on the way.  Actually, two of them are on the way.  Lunchbox needs one too.

I did have a good race though, and I actually enjoyed it.  What I didn’t enjoy was having a mechanical issue.  That just sucks.  I will do all I can to make sure this doesn’t happen again.

The single speed is so much easier.