Sunday was another day in the woods, and coincidentally at the very same place as Saturday's adventure.  The Niner demo truck rolled into full of bikes for us to ride, and I was more than happy to oblige. 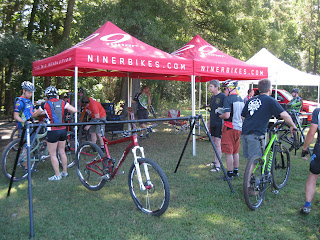 While I’m not really in the market for anything with all that suspension (or gears for that matter), I really had a hankerin’ to try out the Jet 9 RDO.  Lunchbox isn’t really too keen on all that squishy stuff either, but he though it would be fun to join me.  There just so happened to be two XL demos on the rack waiting for us. 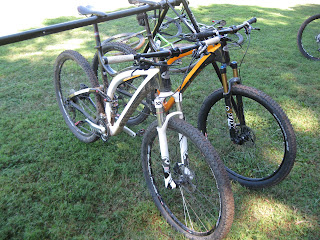 While we got changed into our riding gear, Mike from Niner setup the bikes just for us. 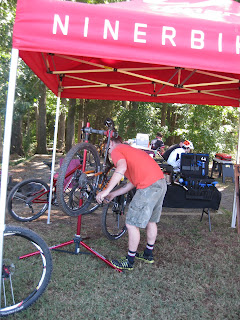 We hit the trail with two other locals, and it took me a while to get used to all that bike.  I mean, holy shit, gears and suspension?  I didn’t know what to do with all that after spending so much time riding a hardtail single speed.  Every time I stood up to climb, I was reminded why I like having no rear suspension:  the bike bobbed a little bit with every pedal stroke.  It wasn’t much, but enough for me to notice.  I realized that this kind of bike was suited for sitting and spinning in a lower gear on the climbs.

Once I figured out how to ride it, it was a blast.  The bike handling was incredible, and it was comfortable.  Like, way too comfortable.  I took the shittier lines on purpose when I could, and the bike just gobbled everything up.  I was really enjoying every root, rock, and jump, and the bike took everything I threw at it.  We stopped every so often to regroup, and I still couldn’t believe I was on such a fun bike. 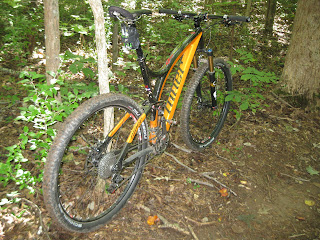 Lunchbox was enjoying the ride too.  He gave up squishy bikes not long after I did, and he understood the benefit of riding a hardtail on cross country trails.  However, he too was having a good ol’ time out there throwing that bike around.  I betcha if someone gave him one of those he would ride the shit out of it.  He was definitely happy to be out there on the trail with all that squish. 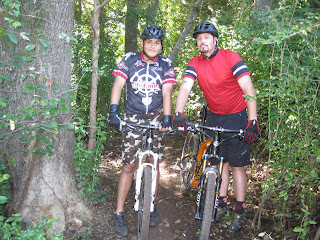 Will a full suspension 29er be my next bike purchase?  Probably not.  I mean, I thoroughly enjoyed it, but I think it’s a little too much bike for what I normally ride.  I would love to have one though, and I can’t totally rule out getting one in the future.

I would like to give a big shout out to Niner Bikes for coming back to and to The Cycle Path for hosting the event.