Some fucker will come along and try to make it easier.  This is a problem on pretty much every mountain bike trail in existence:  difficult features are bypassed by inexperienced riders.  Instead of taking the time to learn how to ride a little bit better, they make go arounds and completely screw up the intended flow of the trail.  It happens everywhere, including “The Trail.”

When we were out working on Sunday, we noticed something odd.  We had stopped working on a rock garden the last time we were there, and this time we found several lines around it that we didn’t remember cutting.  The new lines were cut in quite shitty I might add, so I knew we didn’t do it.  We spent a few minutes “erasing” what the perpetrators had hastily built, and finally got a chance to complete the Three Headed Monster (there are three options at this point.)  It came out quite nice, and it’s sure to be challenging. 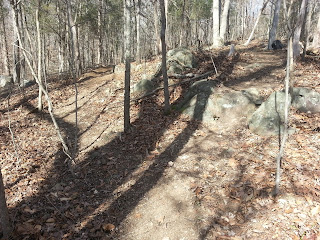 This is at the end of a long downhill, and your reward is a gauntlet of rocks.  None of it is too difficult though (to an experienced rider), so we couldn’t understand why someone would route the trail completely around it.  It’s part of the reason we’re building shit out there in the first place:  to kick your ass.

We decided to take a walk on the rest of the trail, and we found a few more (smaller) go arounds and even some strategically placed rocks that didn’t belong.  We spent a good while removing shit from the trail, and the more we did the more it pissed us off.

It’s really dumb.  I mean, why would you make a go around for some tiny little roots between a couple of trees? 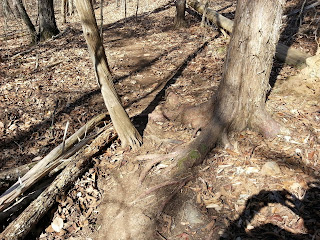 The logs to the left were put in place by us to let the guilty party know that their shortcut isn’t welcome.

Unless you know me or the rest of the crew that’s working out there, then you don’t know where this place is.  It’s not that we don’t want to share.  In fact, it’s quite the opposite.  We’d like to get a good amount of trail in first before we disclose the location.  However, it’s not too difficult to find if you look in the right place, and I’m sure that’s what happened in this case.  Overall, The Trail isn’t that hard to ride.  I mean, we have lots of smooth, fast sections. 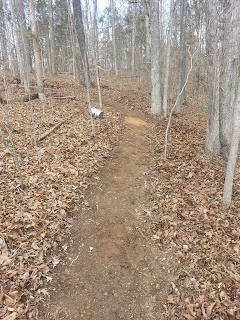 After we finished undoing the stupid shit, we got busy.  We cut in a really large climb that will eventually lead to a really fun downhill again, and we took extra care to make sure we added some more difficult shit.  We spent several hours out there, and eventually reached the end of the line. 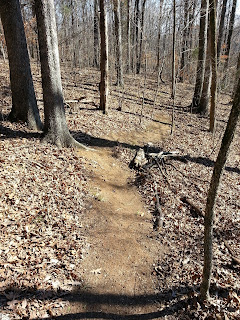 I went back out on Tuesday to see if anyone else had been there and I was pleased that they hadn’t.  We’re busting our collective asses to make an all-weather, fun (read:  difficult) singletrack sanctuary.  It won’t be for the faint of heart, that’s for sure.

If you can’t ride it, then you should practice.  If you’re not willing to work on your skills, then you don’t belong there.  That goes for any trail.

I have no problem falling on my ass out there until I can ride the whole thing.

Wow, people dumbing down a trail before it's even open... that BLOWS! And a go around the roots between the trees, totally unacceptable!

You should get a scout cam out there.