Well, since the cat is sorta already out of the bag I’ll get right to it…

Lunchbox dressed up like a big ol’ banana at yesterday’s Winter Series finale.. 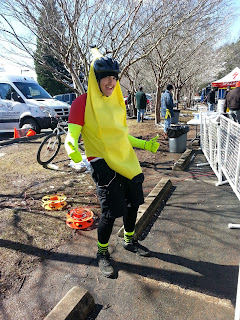 It had snowed the day before and it was really cold, but Lunchbox lived up to his promise to dress up again for his race.  Just like the four previous races in the series, he was out there to have fun.  People were cold, muddy, and miserable from the day’s previous races, but everyone that saw that giant banana got a chuckle out of it.  That made him feel pretty good.  You know, because he was giving his fans what they wanted. 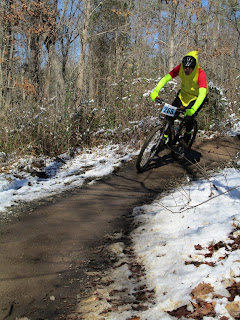 He was still fast in the woods, and surprisingly, riding in a banana suit wasn’t too bad. 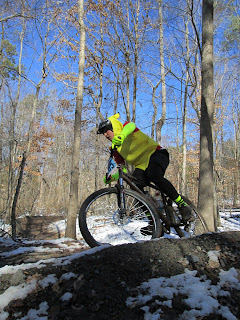 The crowd laughed and cheered every time he went by on the course.  He was having fun, and I was having just as much fun watching him.  The course was muddy, sloppy, and still kinda wet, but my boy is a mountain biker.

These things do not affect him 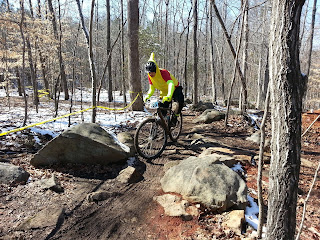 As always, I was proud of my boy for racing.  He doesn’t do it very often, because he just wants to have fun riding his bike.  In this series, he wasn’t even close to being on the podium with all those tiny, serious racer children in his class.  He didn’t care about that at all.  But, when we got to the afterparty/awards ceremony we all got a little surprise.

They started announcing the overall standings for each class, and we all clapped after each name was called.  When they got to the junior division we knew it would be all the fast racer children in the top five spots.  We didn't even hear the name called for fifth place, but we clapped just the same.

When the name of 4th place overall was called, we all looked at each other in disbelief… 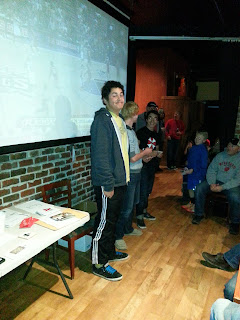 It was my big goofy kid that was called up to the front of the room.

We had no idea that he was even in contention for the top five.  Although he was being silly and doesn’t train for races, he does work hard out there.  He deserved this for sure, and I couldn’t be more proud of him.  Lunchbox is pretty rad.

And the lesson for today is…

It’s okay to have a little fun and not take this stuff so seriously.