Now That I’m Done Racing For A While…

Well, sort of.  I ordered a few parts for my road bike a while back, and I finally got everything installed.  It wasn’t too bad I guess, since I only had to swap out my handlebars (to wider ones) and stem (to a shorter one) to make the bike fit me a better.  The hard part was replacing the bar tape.  That shit appears to be some kind of long lost art or a cosmic mystery.

Seriously, I had quite the difficult time wrapping bar tape around my new handlebars.  It may seem funny to you, but I’m no roadie so I am not familiar with such things.  On a mountain bike, you just slide your grips on and tighten them down (assuming you have lock-on grips.)  Road bike grippy stuff is an entirely different animal.  After about an hour of frustration and several beers though, I finally got it to look pretty “professional.” 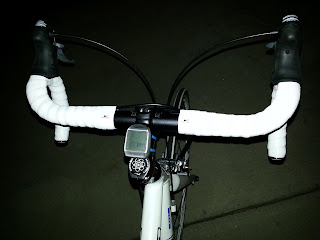 Of course, I used Lizard Skins DSP bar tape, and I really like it so far.  It’s a little pricey for the common road bike enthusiast, but I think it’s well worth it.  The grip it provides it phenomenal. 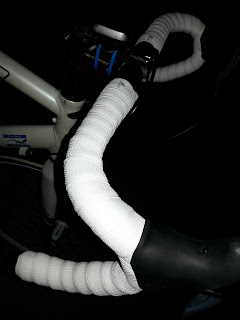 Plus, it looks pretty damn good. 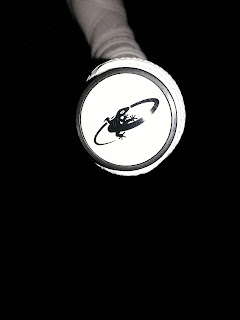 With a road bike that fits better and some shiny new shit to enjoy, it looks like I might start riding out on the ol’ country roads a little more.  I wouldn’t call it training though.  Hell, I don’t call anything training, even if it actually is training.

Since you know damn well that I won’t be spending all my free time on the road bike, I’ll get to the real deal.  Now that I’m not “racing” on Sundays for a little while, the plan is to get back out on The Trail.  It’s been a while since I’ve talked about it here, but rest assured that we’ve been working our collective asses off. 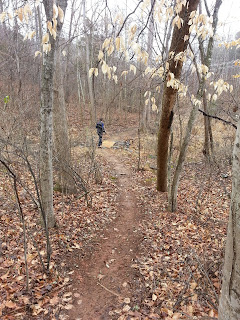 With our flooding problem resolved for now, we decided to fix the trail where it crossed several creeks (that we turned into one.)  A couple of cedar logs and some rocks did the trick. 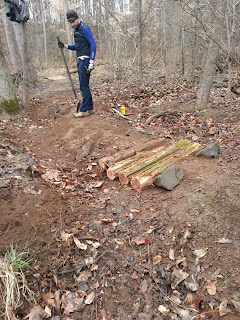 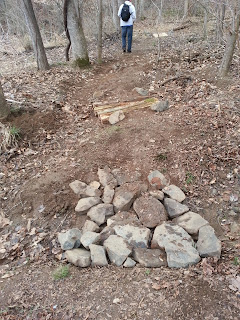 We also flagged a shitload of new stuff, so we got busy cutting it in.  Irish Luke, TomTom, and I spent several hours out there on Saturday just before the big snow storm and made our little slice of heaven just a little bit longer. 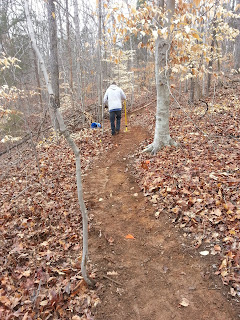 We still have lots to go obviously, but we’re getting really close to completing the first loop.  Some days we get a large crew out there, and other times it’s just two of us.  I’ve had several people inquire as to the wherebouts of this fine piece of property, and people have also wanted to come out and ride it.

Like I told you before, if you come out to help us build it, you can ride it.  It’s not that big of a secret anymore.

That’s it for today.  I have some planning to do for this weekend.  It’s gonna be busy as shit, and of course I’ll talk about it tomorrow.