To Hell With Baby Steps

I wanted to get out and ride for my three day weekend.  I was worried that I would wake up Saturday morning and feel like shit, but it was all for nothing.  My ribs are only a little sore now, so I felt good enough to head out on the mountain bike.

And go to the actual mountains: 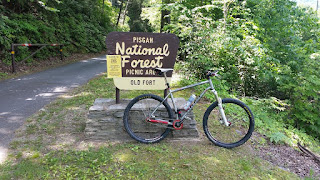 While it might seem kinda dumb to ride in The Pisgah whilst one is recovering from broken ribs, it actually makes perfect sense to me.  I knew that if I went somewhere local, I'll half ass my ride and not really have fun.  I know this part of The Pisgah pretty well too, so I went alone.  Again.  Who gives a shit.

It was just me, my bike, and the warm mountain air.  I wasn't on anyone else's time schedule or pace, and I could stop to enjoy myself.  Even though the first part of my route took me down a paved road, it was still nice. 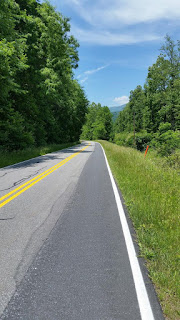 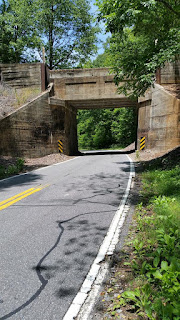 Along the way, I made the customary stop at the geyser, which I used to cool off a little. 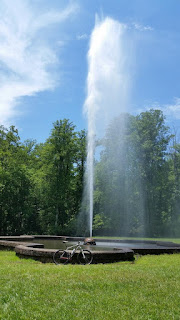 After that, it was climbing.  I rode up Mill Creek, and when the pavement ended the road got steeper.  One gear and sore ribs made it that much harder, but it was still fun for some reason.  Yeah, I suffered.  But when I got to the top I had a nice little reward. 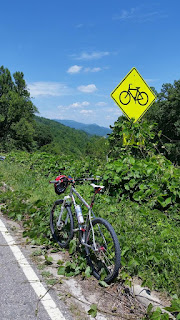 This was where I contemplated a route change.  I had originally thought about riding over to do the Old Toll/Rattlesnake stuff, but my legs reminded me that they weren't quite ready for that yet.  So, I opted for an old friend... 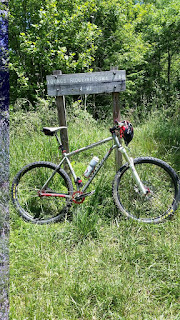 Again, more climbing.  Lots of switchbacks that required some hike a bike on my 32X20 ( I normally walk a little anyway.)  After a bunch of climbing up Kitsuma, you're rewarded with a nice view. 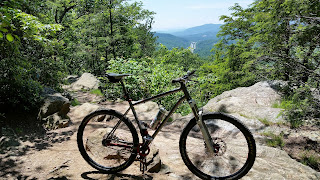 A little climbing after that, and the trail starts to go downhill.  Not for long though.  It's just a tease.  You end up climbing again, but just before that last climb I saw another scenic opportunity... 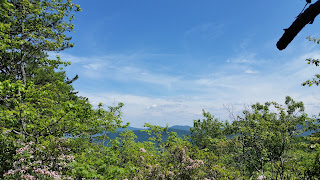 That's when the fun started.  I was worried that I couldn't take the bouncing up and down from the rocks and roots.  I hesitated at first, but after the first mile I started to feel l like I could handle it again.  It's been a long time, and the descent there isn't easy if you're broken (and riding a hardtail like a dumbass.)

After a looooonnnngggg, downhill I popped out into the parking lot where I started.  I was happy, and not as tired as I thought I would be.  Instead of heading right back home, I decided to head over to Asheville to celebrate. 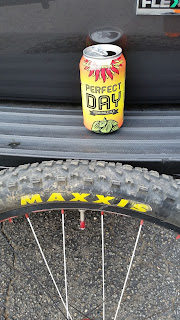 It was close enough to perfect.  I really can't complain.   Time on my bike away from people, beautiful views, and good beer are the ingredients for a good time in my book.

The next chapter should be rad too...