After riding Raccoon Mountain and having beer, I had work to do.  When I got back to my hotel I had to work on my bike (to prevent moar flats the next time I rode.)  I added some sealant to my rear tire and changed out the tube and Co2 in my Awesome Strap. 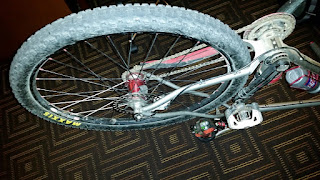 A few beers later, I was satisfied that my next ride in Chattanooga would be incident free.

I worked all day on Thursday, but during my (very little) down time I planned my evening ride.  The guitar playing bartender at Moccasin Bend Brewery and I talked about my ride while I enjoyed beer, and he asked me what else I was planning to ride in the area.  I said I had no idea.  He suggested 5 Points to me.  He said it was fast and flowy, but with plenty of rocks and other features to keep it technically challenging.  I was intrigued so I hit up the local websites to get directions.  While it's a Chattanooga trail, it's actually located about fifteen miles away in North Georgia.

I high-tailed it outta work and headed south across the state line. 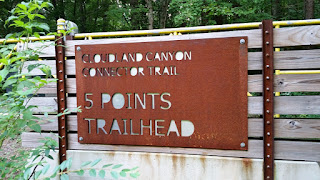 I had no idea what a good route would be, but I figured out some options.  While I was getting ready in the parking lot I listened in on some conversations being held by locals getting ready for their ride.  I opted not to ride with them (because I like to be on my own schedule.)  I took a photo of the maps at the kiosk as a reference in case I got lost. 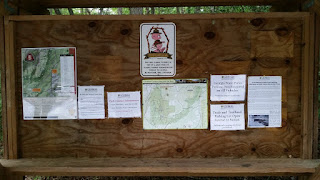 When I started the ride, it was on a bi-directional connector trail (actually the whole trail is bi-directional.)  When I came to the first intersection, I opted for the "most difficult" trail thinking I would have the most fun. 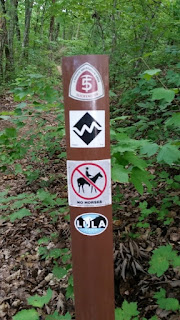 It was fun, but hardly technical (or difficult.)  But, it was fast and flowy. 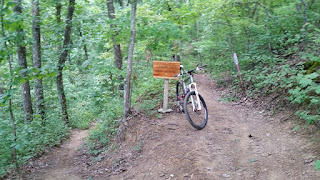 I came to another intersection, and again opted for the "most difficult."  A few minutes later I found myself out in the open with a nice photo opportunity. 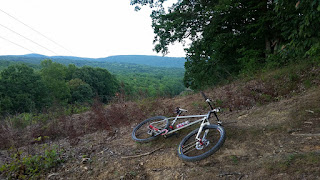 Then I turned around to follow the trail and saw another great photo op. 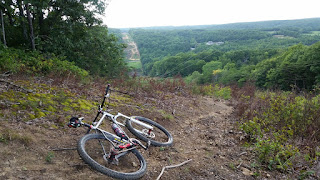 That's when things sorta went to shit.  The trail disappeared, and rather than turning around I just dropped down the fall line (with drooper post engaged) until I found another "real" trail.  I narrowly avoided going over the bars in the process, and I was le tired. 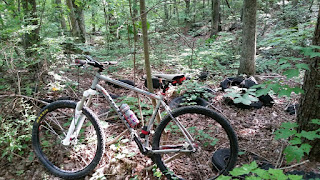 I recovered and the trail returned to fast and flowy, but this time it had a few small rocks scattered about.  Then a few big rocks. 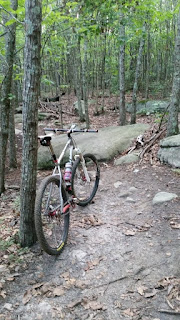 That was fun, but then the trail got super wide and had less rocks. 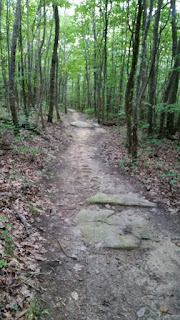 Still fun, especially when I found a trail feature made out of an old car. 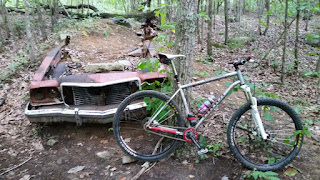 I ran into those guys from the parking lot again, and we chatted for a bit.  They gave me pointers to make my ride better and it was much appreciated.  While I didn't find anything there very difficult (climbs rocks, etc.) I still had a fun time.  Oh yeah, and no flat tires.  I rode for about two and a half hours, and I finished with lots of daylight left.  It was time to get out of there and find some grub.

Luckily, some of the Chattanooga locals told me about a spot that not only had good food, but a clever name. 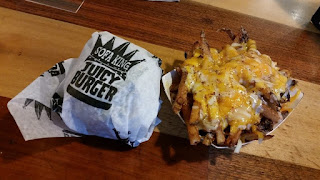 And yes, it was sofucking good too.

Chattanooga was good to me.  I went there for work, but I played during my free time.  Bike rides, beer, and beautiful scenery made for some good memories, and I hope to go back soon.  You know, without the work part this time.

Although I didn't find anything overly technical about the trails I rode, they were pretty fun nonetheless.