A New Adventure To The Same Ol' Place

Three months in the new place.

I moved to the opposite side of town (near the Whitewater Center for all you locals), so I'm still getting familiar with my surroundings.  I've ventured out a few times to meet my neighbors (see yesterday's post) but I'd often wondered if I'd be able to find any good road riding routes.  Living almost ten years in the University area I knew where to go and how to get there and, most importantly, how to do it without getting run over by aggressive and/or distracted drivers.

Luckily, whilst perusing The Internets I stumbled upon a road ride route I did quite a few years ago with a group.  The ride was on a side of town that was very unfamiliar to me.  Little did I know that the far end of the ride circled back at a spot only a mile from my future home.  I scribbled down some notes) including road names and such) and headed out the door.  After stopping to see my horse friends, I wandered into the city on some nice, quiet roads.

I've ridden into the city before, but from the new house it was much more pleasurable.  Country roads for the most part, and even when I got closer to the urban stuff it was quiet. 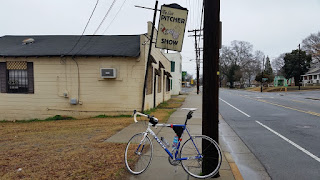 I started exploring a little bit, not really knowing this side since I usually came in the other way.  Soon though, I spotted a sorta familiar spot and I stopped for a quick break.  And to take a picture of the big buildings of course. 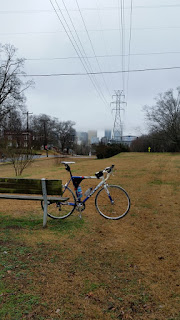 You can't really see the buildings too well because it was shitty outside.  I didn't mind.  I was outside on an adventure.  I didn't stay there long.  I took off towards parts unknown, but sorta towards those buildings.  That's when I spotted a path along a railroad track and decided to investigate. 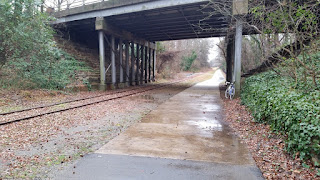 It went on for a while, and so did I.  I was lost on a cold and rainy day.  A good lost though.  I may have even ended up in The Pisgah at one point on my ride. 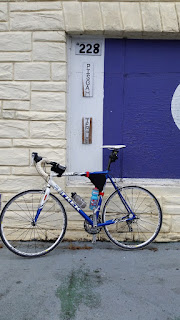 I wasn't lost.  I headed back towards my house, taking a different route this time.  You see some weird shit when you take the road less traveled. 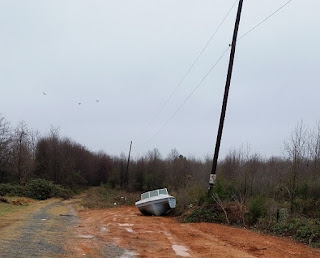 I guess we had a lot of rain.

I eventually made it back to the house, after nearly twenty five miles.  That wasn't much, but it was enough.  Upon my return I learned that the little lady had gone out on her own roadie adventure in the rain.  She no haz blog though so it doesn't count.