Getting Back And Giving Back

Sunday was a really good day.  I didn't ride much, but I was on a bike.

And around bike people.

You see, I decided to spend my Sunday volunteering to help out with a clinic for the 2017 Charlotte Winter Short Track Series.  It's a race I've done many times in the past, and it's also the very first local race I ever attended when I first moved here.  It's lots of fun to do, but this time around I decided to give back and share some of my "racing knowledge."

I know, I know, I don't race it anymore.  And no, I didn't teach a clinic about heckling (although I could have.)  It was a beginner's clinic, designed to get more people interested in the series and maybe get some of them that are undecided a push in the right direction to give it a shot.

The turnout was pretty awesome. 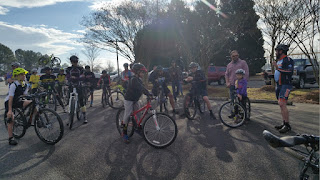 There were men, women, children, and I think I even saw a couple of dogs (they didn't bring bikes.)  Some were beginners, others were folks that were returning to short track racing after a long hiatus.  Some were just there to pick up a few pointers.  We broke up into several groups and the clinic-goers rotated between stations that covered race start/prep, cornering, passing, and trail vision.

I (along with two other "experienced" racers) took the race start/prep group and ran with it.  It felt weird being up in front of people as a so-called "expert", so I was a little uncomfortable at first.  But in reality, I've never forgotten what it was like to be a beginner and I was able to share that with the group quite easily.  Everyone seemed very receptive, and they were having a good time while learning a thing or two. 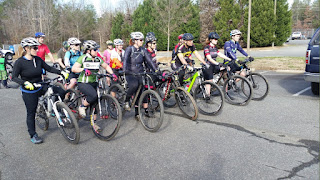 Once the everyone filtered through our group, I ended up on the trail riding with one of the other ones.  I didn't log much distance that day, but I was on my bike on an unseasonably warm winter day and having a great time.  It felt good to give back too.  Maybe I should do that more often and quit being such an asshole that's trying to be what's wrong with this sport.

Tune in tomorrow for what might be a ride report.

Yes, I said tomorrow.  Trying to keep this thing going again, you know.
Posted by TheMutt at 8:29 AM

It was a VERY good day!