Or write this shit like no one is reading.  Same same.

I'm back to blogging sorta regularly, but I won't be here every day.  Maybe when my activity ramps up and I'm much busier bike-wise, I'll have more to talk about and can justify being here more often.

Speaking of which, maybe it's time to plan for the "season."

Last year, I had a plan.  Coming off of winning the 2015 Southern Classic Series, I wanted to give it one more go.  I'd try to win the series again (in the fat boy class of course), and retire from short cross country races.  I actually had fun doing them finally, but the constant travel was wearing me out.  I started the season with one race, then a couple of health problems made me pull the plug on my plan.  I didn't race again until November (which was a 3rd Place in the Tree Shaker), but I figured that once 2017 rolled around I would re-visit my plan.  Aside from the Southern Classic, there were a few races that I always do, such as this one...

The 6 Hour of Warrior Creek.  It was always a fun time, but I'm out this year.  It did indeed sell out (like always), but not at the record-setting pace as it had in the past.  I know some people were disappoint that they didn't get in, but I wasn't one of them.  I had plenty of chances to register but I decided against it.  While it is a great race on some fun trails, I think it's run its course for me.  The love just isn't there, but I hope the rest of you that signed up have a great time.

Send me a postcard or some shit.

One race that is absolutely on my calendar is the Great Winter Escape Race, better known as... 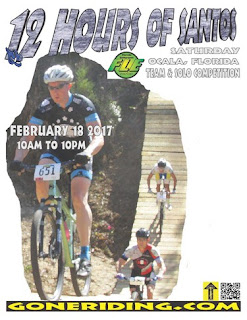 Yeah, it's Florida.  Yeah, it's "flat."  It's also back in my home state, which is usually quite warm in February compared to here in North Carolina.  It's a race and a party all rolled into one, which is in line with the kind of fun I'm trying to have this year.  Plus, in addition to my Florida friends that will be there, a whole bunch of NC people usually come down there too.  So yeah, I'm definitely in for this one.

As far as the Southern Classic Series, I'm sorta "meh."  I've made a lot of friends during that series (some of them are "dirt roadies" and that's perfectly okay), but traveling to some of the same ol' places far, far away to race for an hour or two might not be the thing for me this season.  So like I said last year, maybe my "retirement" has started a little sooner than I wanted.

I'll do some other events (or races, whatever.)  Maybe some more stuff in The Pisgah.  My main goal this year though is instead of traveling all over the Southeast to "race", I'll spend that time traveling to trails to ride for fun.  You know, getting into adventures like Caine from Kung-Fu.

Or Jules from Pulp Fiction...

I should have shotguns for this shit.
Posted by TheMutt at 8:31 AM