Back In The Saddle

It's finally Spring.  And it's beautiful outside.  And damn it, I was determined to get out on the bike.  Saturday didn't pan out because the kid and I ended up hanging out together doing other stuff and forgot about the time.  But, there was always Sunday...

Luckily, a ride would not escape me on the last day of the weekend.  My pal Ed from down yonder in the Lowcountry was headed up for a work thingy, and he decided to drop in a day early to stay with us so we could go ride.  And as a bonus, Lunchbox was down to get dirty too.

We decided to try my backcountry adventure over to the Whitewater Center because well, Ed is pretty much down for anything.  He just wanted to have fun on the bike, and that was the best I could do to guarantee it.  Lunchbox was different...

That's funny.  He's a very technically skilled mountain biker and he's been riding on fat tires since he was four years old.  He doesn't ride as much as he once did (working full time and going to school and all), but he's still in good enough shape to hang with pretty much anyone.  I told him not to worry and we headed on our way.  A short jaunt through a neighborhood and down the paved road put us in the dirt. 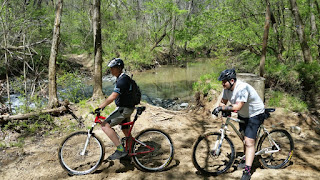 These weren't really mountain bike trails, but they were fun as shit.  Sloppy, rooty, rocky, and pretty much everything a good bike ride should have.  The climbs were steep sometimes and required bits of walking... 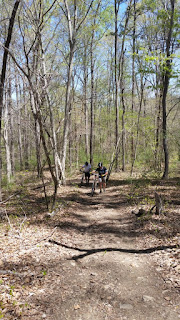 No shame in walking.

We weren't out there to have some good Strava segment or anything like that.  Nope.  And no punk ass gravel or silly roadie shit for us either.  It was pure gnarly. 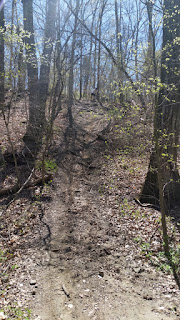 Lunchbox can ride.  And he does it well.  The photo above doesn't do any justice to that descent either.  It was steep as shit.  Just how we like it.

While we did get a few pictures (obviously), our purpose wasn't to have a photo shoot.  We just wanted to ride.  Ed wanted some local Charlotte dirt specials, and Lunchbox wanted to do some product testing for DeFeet and show the average everyday consumer that people that work in the bike industry do in fact ride mountain bikes for fun.

Okay, maybe that last part was my idea.  He still rides for fun though.

Anyway, after our uncharted adventure we finally ended up on some "real" trails.  We didn't take any photos though, but it was still fun nonetheless.  And then suddenly, Ed and I could not resist the temptation of beer. 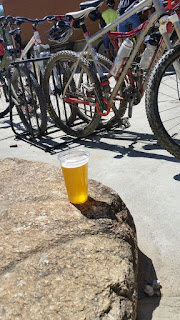 It was warm outside and we had cold beer (the kid had a sports drink because he's under age.)  We parked ourselves by the man-made river to watch the kayaks and rafts go by for a while. 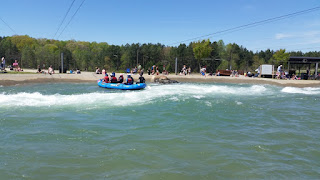 It was relaxing I guess, but something much more excited was happening.  See those zipline wires up above?  We looked up at one point and some a lady stuck on one. 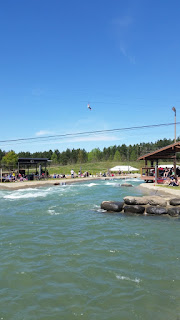 She was there for a while.  I mean, long enough to wonder if anyone (other than those of us below) knew she was there.  We waited...

Until the next time I get back here for blogging...

Mebbe tomorrow.
Posted by TheMutt at 8:51 AM