Last week, I won an all expense paid trip to Chattanooga, TN.  Actually it was for work, but whatever.  One of our other engineers needed some assistance on a project for the week and I volunteered.  The interesting part was when I responded to the email from my boss asking for help.  His response wasn't "Thank you," rather it was a link to the local mountain bike trails in the area.  That was rad.

I hit the road early in the morning and headed west across the North Carolina mountains.  Rolling through Knoxville, I headed southwest towards Chattanooga.  When I arrived I had to stop by the customer site first before I checked into my hotel.  The first thing I noticed was that they were pretty bike-friendly out there. 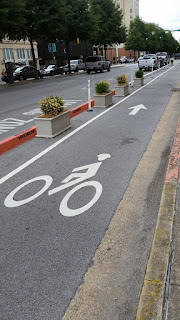 Protected bike lanes.  They haz them.

I did a little prep work and headed to my hotel.  It was too late to get in a mountain bike ride so I got on The Internets and looked for local breweries.  I found several, including one within walking distance from my temporary residence.  I changed my clothes and hit the pavement. 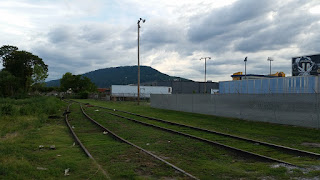 Chattanooga is surrounded by mountains so it made the walk quite pleasant.  Before I knew it, I saw a good sign. 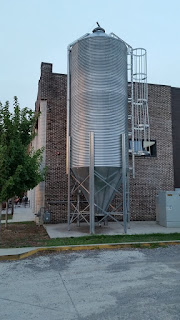 Around the corner from that lovely site was the Chattanooga Brewing Company.  I walked in and was greeted by nice people and a wide array of beer.  I opted for their IPA of course. 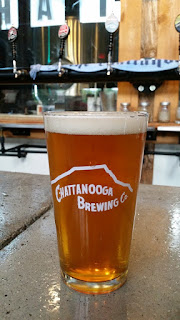 I actually had several.  They had a kitchen on site, so I enjoyed some good food too.  Two (or three or four or five) beers later, I wandered back to the hotel just before the sun went down.  I got my shit together and went to bed, ready for a long day at work.

During the very few breaks I had during the day, I started planning my first post-work ride.  I found a map on The Internets from their local mountain bike club and it looked confusing.  I took a picture of it just in case I needed it later. 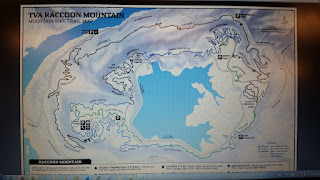 I finished work at a reasonable hour and I headed out to the trail.  My first ride out there would be Raccoon Mountain, and on the drive out there I wondered if I had enough daylight to get in a good ride.  You know, unfamiliar trails and all that.

The journey to the trailhead made me wonder if I would ever get there. 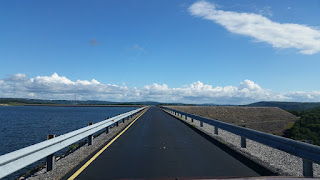 I was intrigued.  And worried.  What was I getting myself into?  Who gives a shit.  I'm always down for an adventure.

I'll get to it tomorrow.