Much Adventure And Happiness

To make great bike ride.  (Thanks to Mike L. for that.)

I mentioned yesterday that it was a nice day on Sunday.  Hell, it was a nice weekend.  It would have been the perfect time to head for the hills, but I had some things to do here locally and couldn't be away that long.  I needed some singletrack though because it's been way too long.  I've been on a few adventures from the house on several different bikes, but singletrack has been almost nonexistent.

That's when I decided to finally get off of my ass and execute a plan I made back when we first moved into the new house.  Mucho Mexican foodz and many beerz the night before gave me the go ahead, so I woke up early in the morning to see how easy it would be to ride to the Whitewater Center.  The map said it would only be three miles of road riding, so I took off hoping that it would be somewhat enjoyable (the trip over there I mean.)  This was the first time that I'd started a ride so early in a long, long time. 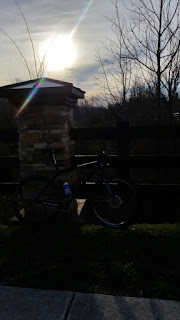 I had to pass through two neighborhoods on the way out of mine, and then it was on to the open road (and a fairly busy one I might add.)  Spinning like crazy on a single speed mountain bike isn't the best way to move swiftly down the road, but it wasn't too bad.  One small road climb, a left, and another left put me pretty close to my destination.  But then I got held up. 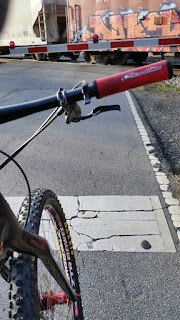 I waited for a bit while the train rolled by ever so slowly.  Eventually it passed, and a screaming road downhill put me within eyesight of the exit for the Carolina Thread Trail section out at the WWC.  It would be dirt riding from here on out. 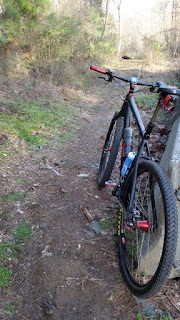 Oh, how I missed you, singletrack.  That trail was fast and flowy, and I was enjoying the shit out of a nice day in the dirt.  Once I reached the end of that trail, I ended up on the Figure 8 Trail and its multitude of bridges. 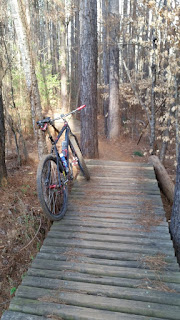 Once I reached the end of that trail, I came up on a running race.  I was warned by the little lady that it was going on out there, so I just sat back and waited for the runners to uh, go running by. 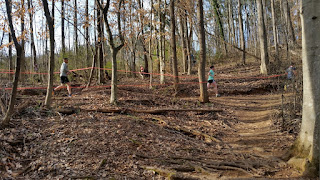 Then it was more trails, until I eventually popped out at the man-made river. 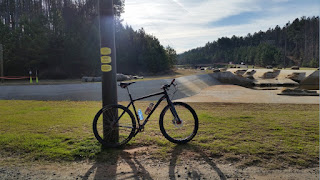 While I was out in the open, I chatted with my pal Leaf Life about my ride over there and where I lived.  He gave me a few suggestions to try for the next trip over there that may or may not reduce the amount of pavement I have to ride.  I can't wait to try it.

Anyway, A little more trail riding happened and then I rolled up to the parking lot to make a restroom pit stop before I returned home.  I ended up running into tons of my local bike friends, and they were all just getting started on their rides.  I said goodbye and head out a different way than I came in. 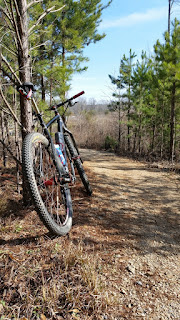 That little path goes along side the main road going into the park, and although it was wide as shit, it was hella fun.  Eventually I popped out to the entrance. 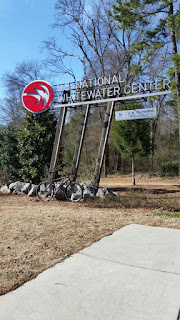 It was here that I pondered taking a different route home.  I headed the opposite way down the road I came in, and found myself in a very good place. 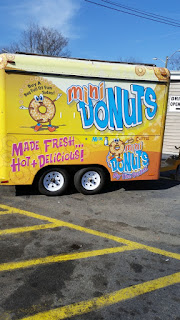 Donuts are excellent ride fuel.  It's a scientific fact.

I headed north from the donut trailer, and after a small amount of riding on the road I found another path. 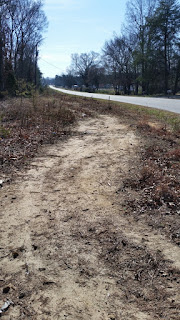 This wasn't part of the suggestions I received earlier, so it was a nice surprise.  Especially when it headed into the woods. 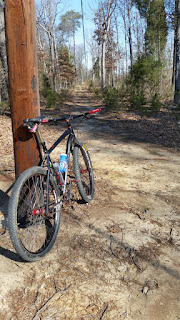 Which woods?  I have no freaking idea.  It was fun though, and after a short while I popped out in front of a neighborhood that leads to mine.

The trip there took twenty minutes (including waiting for the train.)  It was exactly three miles from my garage to the end of the Thread Trail.  The trip home took about twenty five minutes, which included the donut stop.  It was about three and a half miles.  I felt relatively safe on the road portions of my ride, and more importantly, it didn't wear me out.  The fact that I was able to hop on my bike and ride to some of the best trails here in Charlotte in a short amount of time was so awesome.  I figured that the travel time was about the same amount it would've taken me to load my bike on the truck, drive to the WWC, and get ready to ride.

You can't beat that with a wet noodle.

I am so happy.  In fact, soon I will have to invite some people over so we can do a group ride from the house over there, and then return for beerz and foodz.

I love this new house.