There aren't enough hours in the day.  That is especially accurate on weekends.  Still, that doesn't stop me from trying to squeeze every second I can out of any free time I have.  Sometimes though, it catches up to me and I feelz ded. 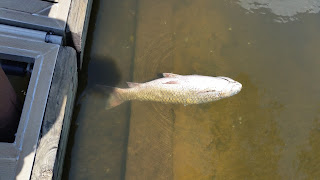 Where am I going with this?  Out on the water of course.  Even though I'm riding more (finally), I'm also trying to spend time on the water with the kayaks.  Since we'd planned an urban ride for last Sunday we pretty much had all day Saturday to be out on the water.  So, the little lady and I loaded up our kayaks and headed north to put our little boats in Mountain Island Lake.

She was so excite about it that she almost didn't wait for me. 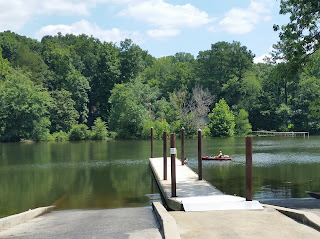 While it's called a "lake", it's really just a dammed river (like everything around here.)  But, it's still pretty rad to paddle around and explore.  We've been putting in at the same spot the last few times because the options for exploration are plentiful.  We took off in a different direction this time and found some big ass rocks. 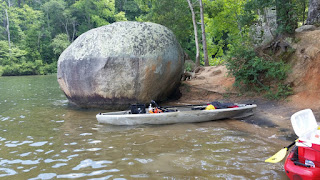 And lately I've been bringing my snorkeling gear so I can explore underwater too. 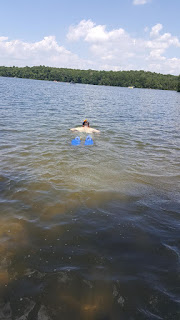 I spent quite a bit of time in the water growing up in Florida and I missed it.  It's nice to be able to do this stuff again, even though up here in North Carolina it's quite different.  Instead of alligators poking up their heads in the water, there are rocks. 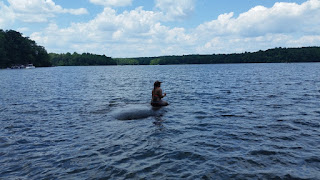 And you just can't plant your ass on an alligator and drink beer.

Buying a couple of boats turned out to be a really good idea.  I've missed being out on the water, but more importantly I enjoy the exploration aspect of it.  That's what I love about being on my bikes too, so I can say for sure that I will be making time for both of these fine hobbies.  I'll even cram as much shit as possible into my little bit of spare time so I don't have to choose one over the other.

You know, because I'll get all the sleep I need when I'm dead.