Blogging is not as constant as it was once upon a time, but riding has been at least.  Except for very recently anyway.  Since I wrote about my awesome camping trip, I haven't been on a bike at all.  Not even once.  I contracted some sort of death virus/cold thingy and felt like complete doo doo all last weekend.  Usually I'll try to power through such things but this time I actually took it easy.  I figured that if I fought it I would drag out the sickness, which would certainly put on damper on my "training" for Florida.  So, I pretty much slept and drank whiskey.

Pretty much what the doctor would order, right?

Anyway, during my convalescence I had some time to think about things other than riding, such as my choice of gear for my upcoming adventure.  After many rides and some overnight tests, I sorta felt like I had everything dialed in.  Through trial and error I'd figured out exactly where to pack everything (for weight distribution and all that), and I felt like I had enough gear but not too much.  Things were going well and according to plan, but then I had to piss in the wind...

"What if I tried something else?" I asked myself.

"Who gives a shit", I immediately replied.

You see, the main piece of advice I received when I started this bikepacking stuff was to just start with what you have and go from there.  Of course, I didn't have any bike bags and had to purchase them, but as far as camping stuff I figured I was fine.  I'd just use that hammock I've had for a while and I'd have a place to sleep.  Simple.  Easy.  Cheap (since I already owned it.)  But then I realized that Florida "Winter" can be unpredictable and is usually rainy, so I had to buy a rain fly for it.  No worries.  Oh, and the cord for the hammock wasn't particularly long and that meant that my choices for hanging it would be limited.  I bought some straps.  Problem solved.  Then after my first overnight I realized that a compact sleeping bag would be a good idea (instead of my plan to use an emergency blanket which was a shitty plan.)  All of a sudden, my camping shit turned into a big pile of nonsense.

Still, everything worked well and most importantly it fit on the bike just fine.  A couple of overnight trips had me feeling confident that I had good shelter and I'd be capable of comfortable sleep.  Honestly though, it was a pain in the ass to setup and take down (and pack.)    I didn't always feel that way, but I realized it when I saw one of the pictures of me doing so on my Veterans Day Weekend camping trip: 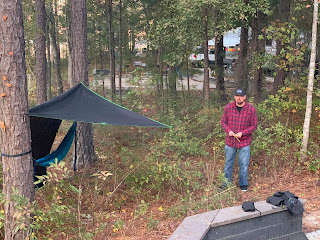 Here's what I recall from that day.  This was a "real" campground with a huge pad for tents, campers, etc. and each site was surrounded by trees.  A couple of folks had little campers and one had a tent.  So I was the dumbass wandering around the perimeter looking for two suitable tress from which to hang my sleeping quarters.  Sure, the hammock straps gave me a little more leeway, but it was still a pain.  I obviously found what I needed, but even then it wasn't ideal.  It worked out well, but the next day I was talking to Bill The Fire Bender about his setup.  He had a backpacking tent that was just roomy enough for him and a little gear.  I asked him if it packed down pretty small and he said it did.  I was intrigued, but I figured it was probably still too big to carry on my bike.

As we were packing up to leave the campsite, I kept an eye on him tearing down his tent while I struggled to gather up all my crap and nonsense to place in various bags.  In fact, he was completely packed up before I even had the rain fly packed away.  I looked at the little bag that contained his shelter and realized that it was a little smaller than my rain fly, hammock, and straps put together.  And as a bonus it even weighed less.  And of course my favorite part was that it seemed like way less of a pain in the ass to tear down, unlike my mishmash of parts and pieces.

At that point I was ready to give up on the hammock.  When I got back home I started shopping everywhere for a similar tent, or one that was even smaller.  I was shocked at how much these things cost though, considering I already owned a pretty nice tent that fits ten people that I didn't even spend a hundred bucks on.  I guess it's like technology; the smaller it is the more you pay.  Still, I was determined to ditch the hammock for something easier.  Eventually I found something I liked that wouldn't rape my bank account.  I found it on The Internets though, which meant that I couldn't be certain that the measurements were correct.  I'm 6'4", so compact and me don't usually get along but in this case the measurements did give me some hope.  At 88 inches long, I'd have a foot of clearance (so I could really stretch out.)  The width was 35 inches, which meant that I would have to snuggle up to my clothes at night (which would be good to keep them warm anyway.)  And 42 inches tall meant that I could at least sit up first instead of just diving outside onto the ground.  Were these measurements accurate though?  Only one way to find out...

A few days later my new compact tent arrived.  The bag was small (plus) and the weight was less than my current gear (big plus.)  So far so good but I needed to see if it was big enough inside.  I hauled it out to the garage where Lunchbox was waiting (probably to watch me fail.)  Although it came with stakes, it was supposed to be freestanding.  I figured I would just try to set it up right then and there.  There was one problem though...

I mentioned to Lunchbox that I should probably look on the manufacturer's website for instructions, but I am stubborn so I wasn't going to do that.  I'll just wing it.  He said that sounded like a solid plan.  I pulled everything out of the bag and after a quick study of the parts and pieces, I had it put together in under five minutes.

I was impressed.  Not only was it ridiculously easy to erect (I just had to use that word at least once because I am a juvenile), it looked pretty damn roomy for a "compact" tent.  Lunchbox was also impressed.  I said, "Well, I guess I should get in."  I was able to get into it without any hassle and quickly noticed that I had plenty of room.  In fact, much more than I expected.  My only regret is that I didn't have him take a photo of me while I was on the floor of my garage um, "camping."

Overall, this seemed like a pretty good decision.  Although I must admit, I'm feeling a little guilt about not using my hammock for my upcoming adventure.  Something about riding three hundred miles and camping in a hammock along the way sounded pretty badass, but I'll also tell you that when it comes time to sleep during that ride and I happen to be near a hotel, I won't hesitate to take that option.  I may be dumb for trying to ride my bicycle across Florida, but I'm not an idiot.

Anyway, after I stopped patting myself on the back for buying a tent and setting it up in the garage I realized that I still had more to do.  I had to get the tent broken down, packed back in that tiny bag, and cram that shit on my bike somewhere, preferably in the same space where my hammock and stuff resided previously.  Just like any tent, it was a little tricky getting it folded back up and into the bag but I had it all done in under ten minutes.  Not bad.  Then I packed it on the bike, along with everything else I have been riding with for the past few months.

I haz happiness now.  I'm sure I'll change something else in the next couple of weeks, but at least I'm sorta prepared.  There will be a test ride this weekend with some expert analysis to follow.  Or more nonsensical crap.  Who gives a shit.
Posted by TheMutt at 8:06 AM