Since it was only just last May that I decided to be a bikepacker and set my sights on riding across Florida in December, but Summer my "training" was in full swing.  I'd been doing longer rides every weekend, and even one overnight trip.  I learned a lot from the last overnight trip and I was ready for another.  It came sooner than expected.

When I set a goal of participating in the Cross Florida Individual Time Trial, I somehow decided that I would need one final test to see if I could actually handle something of that magnitude.  And for some strange reason, riding from my house to the Uwharrie National Forest for the night (and returning home the next day of course) seemed like the logical choice.  I still don't know why I picked that particular destination, but I was set on it for some reason and I wouldn't budge.  At 140 miles round trip, it wasn't the same distance as the Florida event (250), but I figured that with the elevation it would be sorta equal, if not even more difficult.  When I started this whole bikepacking thing, such a trip seemed impossible.  I put it in my head that if I could build my way up to that before December came around, I would feel better about my chances down in the Sunshine State.  I knew it would take a while o build up to it, but before I knew it the time had come.

I had a free weekend and my route was planned.  While it would be super hot during the day, nighttime temps would be cool enough to sleep comfortably with the proper gear.  Since I got a little chilly on the last overnight trip, I decided to buy a compact sleeping bag that would fit on the handlebar roll of my bike.  I was ready, for the most part.  My route would take me mostly on back roads, with a couple of stretches on some busier roads (I couldn't help it.)  And to keep from getting bored, the return trip would be a little different than the ride out there.  I had 73 miles planned on the first day, with 67 the next to get home.  Piece of cake.

Saturday morning I loaded up and left my house pretty early.  I figured it would take about eight hours to make the trip east of Charlotte to our little mountains, which would give me plenty of time to set up camp in daylight.  I rolled down the hill and set off on my adventure, meandering through some neighborhoods to get to a greenway. 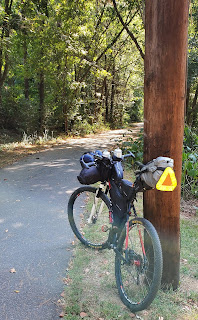 Just like the Florida adventure I have planned for next month, my trip to Uwharrie would have me on mixed terrain.  Roads, greenway, gravel, and my favorite, singletrack.

A little over twenty miles in I was still feeling good, but I had to hit a stretch of busy highway that I somehow couldn't avoid.  Luckily there were super wide shoulders to keep me out of harm's way.

A few miles on that road and it was time for lunch.  Since the rules for CFITT say that I can only use commercial establishments for food, etc. (in addition to packing some snacks), I decided abide by that on this ride and grab a bite to eat and resupply my fluids at a gas station, of which there will be plenty on the Florida route.

I was still feeling pretty good, despite the daunting task of riding 40+ more miles.  I ate a pretty decent sandwich, bought some water and snacks, and rolled out towards Concord.  That section of my route was mostly out in the open, so I was baking in the sun.  I like the heat, but I could feel the energy draining from my body.  I tried to keep my head right and look for little victories, and soon I had one.  I was in Concord.

Oh, and here you can see that I have my new sleeping bag attached.

The next part was a little bit of a blur.  After cutting through their little downtown area, the roads turned country again.  I had to keep checking my printed cue sheet to make sure I was going the right way and I (mostly) was.  Once in a while I would look at the map and it really looked like I was in the middle of nowhere.  That made me extra tired for some reason so I decided I would avoid doing that unless it was necessary.  With nothing around except the occasional house and lots of farmland, I resorted to conversing with myself to keep my head in the game.

And I also made new friends along the way... 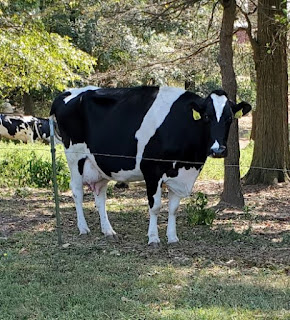 While I was deep in the middle of nowhere, every once in a while the road would change from shitty pavement to gravel.  Back and forth.  I actually enjoyed that.  And then I got another small victory in the form of a new county. 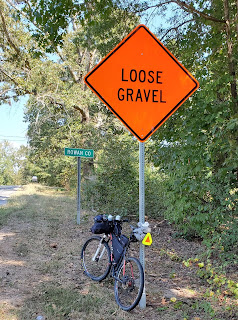 I sorta know Rowan County, but obviously not well enough since I was surprised to be riding through it.  I stopped at a small store for some drinks and chatted with a local dude that told me I was indeed in the middle of nowhere.  Awesome.  Back on the road...

I didn't think I had very far to go at this point.  I actually felt pretty good and I had been keeping myself hydrated in the hot sun.  After a small navigational error I was back on some shitty (for cars) but nice (for me) roads.  And I found another small victory. 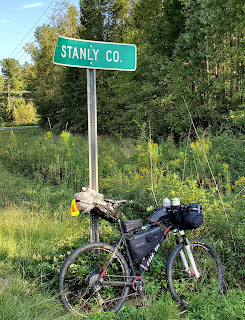 I definitely know Stanly county, and I knew that meant I was much closer to my destination.  I texted the little lady and said I had maybe an hour to go and that I was feeling good.  One of those was a lie...

At this point I had been climbing here and there, but now it was getting tougher.  I was nowhere near civilization, until suddenly I saw a restaurant that looked more like a roadhouse (not the chain restaurant, either.)  I was hungry, but I had a planned food stop coming up soon so I skipped out on a potential bar fight to keep moving towards my destination.  And then out of nowhere, I got a much bigger victory...

I had reached the Yadkin River, and those are the Uwharries in the background.  My campsite was over there somewhere, so that gave me some extra energy.  After taking that picture I hurried across the narrow bridge and had yet another victory...

I've seen that sign a bunch.  However, this was the first time I'd ever ridden a bike to it (the trails we ride out there are nowhere near it.)  Man, I was feeling good.  Until...

Ugh.  It got really climby.  I had been feeling great with all the "victories", but all of a sudden I was super tired and my mental state was fucked.  "

Where the hell is that restaurant/store I'm supposed to see up ahead?"

I kept repeating that question to myself over and over, hoping that would make it appear out of thin air.  I guess it either a) did not exist, or b) it was much further away.  The latter would turn out to be correct, but it gave me much disappoint.

You see, that was supposed to be my next victory.  One last stop before I rolled into the forest to camp for the night.  In my hasty research, I found this "restaurant" on the map that looked like it had everything I would need.  A meal consisting of real food, and supplies for me to take to camp (for breakfast and such.)  I spotted an intersection up ahead.  After double checking the map and seeing that it was indeed my planned stop, I found some extra energy and made the climb to the "restaurant."

It was a goddamn gas station.  The reviews talked about the food and the service, so I guess I thought that meant it was a restaurant.  I mean, they did have "food."

I grabbed the most edible things I could see and hoped like hell I wouldn't get food poisoning. I paid for my "food" and walked out to the parking lot to have a little picnic dinner.  Remember earlier when I said I thought I only had an hour to go?  That was two and a half hours ago.  I know the little lady was probably wondering if I was dead so I figured I should text her.  That didn't work because I had zero service.  Well, I thought, I'd better keep rolling.  Maybe I'll hit a pocket of signal and be able to tell people I'm okay.  So I rolled on... 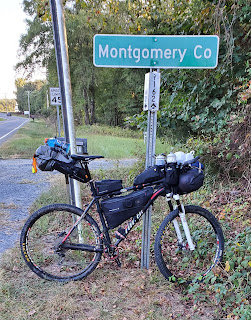 I was deep in the Uwharrie National Forest and it was hilly AF (of course.)  I was tired.  I didn't have far to go but my legs felt like concrete and I didn't have much energy.  And it felt like I was constantly climbing.  Maybe because I was.

No more victories (other than my campsite which was who TF knows where) so I just started taking in the scenery.

But the sun was going down.  Fast.  In the woods it was even darker, and that made everything look the same.  I resisted turning on my lights, riding the gravel roads "Jedi Style."  I was doing anything I could to keep motivated.  I had a campsite reserved, but I started thinking about just rolling into the woods and setting up my hammock wherever the hell I was.

And then, out of nowhere, I saw a familiar road.  I was in the part of the forest that I'd been riding for years.  I got a nice little burst of energy from that and hauled ass to the campsite.  I set up in a hurry and snapped a picture before it got totally dark.

I made it.  It took a little over 10 hours to go 73 miles.  Two hours beyond what I thought it would take, but I wasn't upset about it.  I was able to connect to the camp host's wifi and let everyone know I was okay, then I sat down to have a snack, re-hydrate, and get some rest for the night.

That would turn out to be one of the more difficult parts of my trip.