I Can Change My Mind

As it turns out, I’m not burned out on the single speed like I thought I was, and taking a break from it for a long time is not the right answer.  I rode my geared bike once (after a two month hiatus) and it was fun and all that, but I forgot about one of the main reasons to ride a bike with only one gear.

Rather than hang up the SS for a while and ride the geared bike exclusively, I wanted to make things even simpler.  I’ve been doing a lot of bike work lately, so I wasn’t sure if I was up to the task.  It was time to call in my little astromech droid to help. 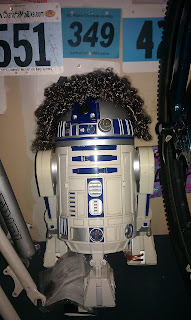 Yes, my little shop helper R2D2.  Even though I haven’t mentioned him in a while, he’s still here.  You might remember that he fixes things quite well, but that little fucker also spilled my beer one time.  He’s not bad for free help, and it gives me time to drink more beer.  I’ll just make sure not to let him carry it.

Anyway, I had him change things up on the single speed.  Before I even finished one beer, he changed out my squisy fork for one that’s not so squishy.  Yes folks, I have gone the way of the rigid. 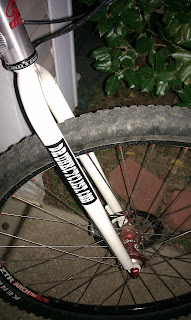 And yeah, that’s my nod to the boys over at Drunk Cyclist.

The other side is for the rest of you: 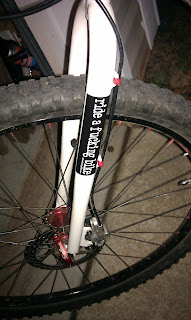 I did a little test riding, and I totally dig it.  I’ll definitely have to play with tire pressure and whatnot, but I think I will enjoy this change.  It’s probably just what I needed to make things all fresh and new.

When I got back from rolling on my rigid around the neighborhood (I do have my own private trail, you know), I noticed an odd sight.  Some lady from my neighborhood (I didn’t really recognize her) had stopped in front of my house and was just staring down at the sidewalk.  Before I could walk over and say something to her, she grabbed a stick or something and starting poking at the concrete.  She looked up at me and immediately stopped.  She then proceeded to walk away like nothing happened.

I walked over to that spot on the sidewalk to see what the hell she was doing, and I found this little fella: 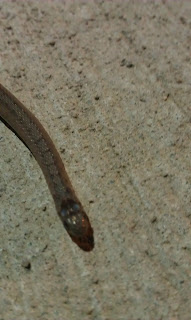 I yelled to Lunchbox to come outside, because he loves snakes almost as much as I do. We watched him slither around for a bit, and when I tried to pick him up he pooed a little.  That was his way of saying hello I guess.  Okay, not really, since that was his only way to defend himself.  We decided to leave him alone, but not before taking another picture. 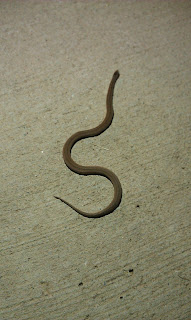 That lady was fucking with it (it was a harmless Brown Snake, btw), and if she was still around I would’ve given her the business.  Snakes are pretty damn cool, and I don’t get why people are so hung up about them.  I guess they didn’t have the luxury of growing up around them like Lunchbox and I have.  Any chance I get to see one it makes me happy.  I got a thing for critters, I guess.

So, maybe this weekend I’ll get to see some snakes out in the wild.  I plan on tearing up some local trails, but since it’s cooled off here a bit there probably won’t be too many snake sightings.  Now the question is do I bring the newly rigid SS or the geared bike?

One at the rear...it's supposed to hurt