I Should Be Happy


Remember when I broke my geared frame a while back?

Well, I ended up getting a warranty replacement.  Normally I would’ve mentioned that by now, but I really didn’t feel like talking about it.  I’m not really that excited, and I’ll tell you why.

The company (I won’t mention any names because you can figure out who I’m talking about) has a lifetime warranty on their frames, and since I’ve gone through the warranty process before I knew they would take care of me.  Well, they sorta did, and I got a new bike out of it. 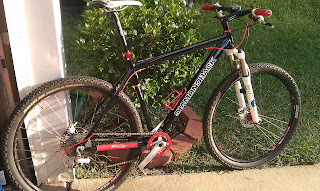 The frame is the same size, make, model, and color, but it is from 2008 (the first year they produced that model.)  Normally it wouldn’t be a big deal, but something was missing when they made the frame that year. 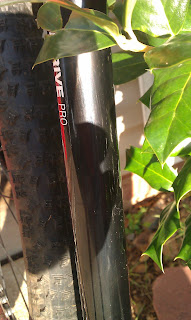 Or should I say lack of anything?

Although it is an extra large (22”) frame, there isn’t a place to mount a water bottle cage on the seat tube.  Every model from 2009 to the present has two bottle cage mounts, including the 2011 model I was riding.  Normally it wouldn’t be a big deal, but I kinda need two water bottles when I ride.  Plus, since the frame I broke had two, I wanted at least an equal replacement.  So yeah, I think it kinda sucks.

That 2008 must be all they had in stock in my size, and normally I should be happy to have received a replacement at all.  However, the new model years are already showing up on the scene (with two bottle cage mounts like any other bike in that size.)  Also, it looks like they’ve finally addressed the issue of cracking frames at the seat tube/top tube junction. 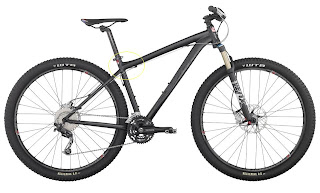 I’ve broken three of their frames in the same place, and I’m guessing I’m not the only one.  So, I’m thinking that maybe they should’ve sent me the newer model, you know, with its reinforced frame and two bottle cage mounts.  That would’ve made me happy, but it’s too little too late.

I didn’t plan on keeping it anyway.

I’m switching my geared ride to another brand soon, so the plan was to get the cracked frame warrantied and give it to Lunchbox.  He’s a growing boy, and at 6’3” and 220 pounds he needs to move up from a large frame.  He’s pretty happy to be getting a new bike, even if it only has one bottle cage mount.  We can take care of that with a little aftermarket fix anyway.

This post wasn’t supposed to be a bash-fest, because I did have something good to say about the shop I went through for the warranty replacement.  They were helpful, had a quick turnaround time, and charged me a great price for labor.  It wasn’t all good though, because I noticed something when I started to take apart the bike to build it up for my kid.  I had trouble getting one of the bottom bracket cups off, and I couldn’t figure out why.

When I looked inside, I found the problem. 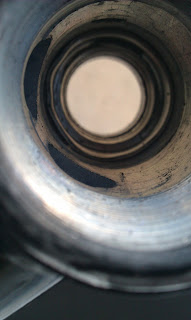 Somehow, the “shop” bent the cup and it wouldn’t turn.  I’m really not even sure how the hell they got it in there.  So, since I couldn’t get the cup off, it looks like Lunchbox will inherit my crankset too.  I’ll have to get a new one.  Bastards.

So, this whole breaking my frame thing has been shitty.  Couple that with other things I’ve experienced over the last few years and it’s easy to see why I’m jumping ship.

At least my kid is happy, and that’s all that counts.


Maybe tomorrow I'll get some build pics up of his "new" bike.

I can help break the new if you need it :)