It’s Not That Bad 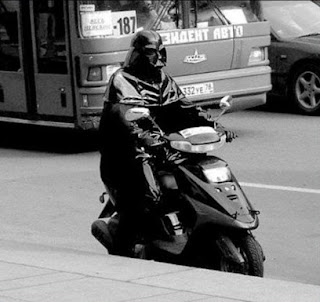 Despite the fact that I had a shitty race at the Grind On The Greenway, I’m not upset about it.  I seem to recall mentioning to someone,"my goal was six laps, I’ll probably do just five, and even if I got only four then I wouldn’t be disappointed."

Since I’ve been so burned out lately, I was actually just happy enough to be out on my bike.

I had no aspirations of doing well in that race, and lack of training and a “proper” race strategy helped that come to fruition.  I don’t regret taking off too fast for the first two laps, because it actually might have helped me in the long run.  Riding a bike in an endurance race for me is usually just about pushing myself, and I’m not always out there to compete with others.  It’s just me and my bike against the trail, and that’s just what I needed after a long season of trying to get on the podium.

While I wouldn’t classify a six hour race as a fun ride, I did have a grand ol’ time.  My skills on the bike seemed to be much better, and climbing on the single speed still gives me satisfaction like no other bike can.  That being said, I may take a break from the one gear action for a while.

Since I went without a geared bike for about two months, riding the single speed exclusively really limited my “fun riding.”  With only one gear there would be no easy climbs, no spinning in a low gear to recover, and no shifting to a higher gear on flat sections to set the land speed record.  Don’t get me wrong though…I love the single speed and the fact that it’s made me a helluva lot stronger.

I’m just not having any fun right now with it.

So, I guess I’ll start riding the geared bike for a little while.  With no races on the horizon (aside from the North Carolina Single Speed Championships which I may or may not attend), I get to actually travel to trails and ride for fun, which is something I haven’t been able to do much this year.  I’m really looking forward to it.


I’m definitely not giving up the single speed bike, but I just want to have a different kind of fun right now.

The single speed can still be fun too though… 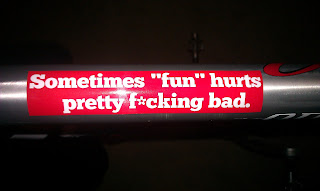 Thanks to Sandie for the idea to slap that sticker on my bike.