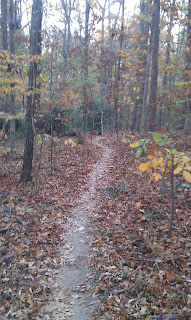 I’m talking about my ride, you perverts.

I rode at our local gem, BYT, and had a blast.  Half in the light and half in the dark, it was the perfect mix for an after work cocktail.  The solitude of being out in the chilly night air was a great end to a long week.  Well, I’m working today, but that doesn’t’ count because it’s Friday.  Still, it was really cool to be out on the trail in the middle of the city, and watching all the people stuck in traffic as I rolled through in the woods next to them. 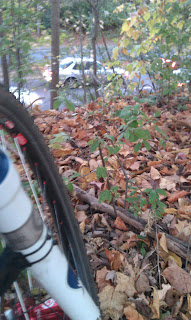 I did have one small issue though.  I was rolling along, and thought, “Hmmm, I can’t remember the last time I replaced my chain.”  Just then, this happened: 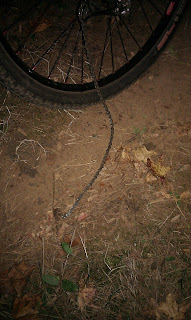 I neglected to bring a quick link with me, so I had to walk out.  I was pretty close to the parking lot, so it wasn’t a big deal.  I already have a new chain in my possession, so this repair will be quick and painless.  That little incident didn’t bother me at all since the rest of the night was so good.

Anyway, after the ride/hike back to the parking lot I headed over to partake in the Tarheel Trailblazers monthly meeting, and we discussed all sorts of things.  We also had our annual elections, and unlike the “other” election going on right now this one was not full of controversy.  Well, unless you think it’s controversial that I’m returning for another year as the Vice President of our club.  I’m no Joe Biden, but I’ll be alright (and so will the club for that matter.)

Politics aside, this weekend is shaping up to be busy again.  Without a race on the schedule, I’ve still managed to jam pack these next two days with toms o’ shit to do.  Tomorrow is the annual Tarheel Trailblazers/Dirt Divas year-end party down in   I know, it’s barely November, but we do this one a little before the end of the year.  You know, in case the world ends next month or something.  The day will be filled with group rides, beer drinking, getting our grub on, and me rockin’ the mic for the prize giveaway.  Somehow I was convinced to emcee this thing, so I’ll make sure to get plenty of hoppy goodness in my system to make it worthwhile for all.

The party goers don’t know how good they’re gonna have it.

Sunday, I’m attending something that has for some reason become an annual tradition for me:

Yeah, the Big Stampede is rolling into town once again, and I’m going.  While it’s been disappointing the last few years, I can’t seem to stay away.  Wandering around looking to find a bargain on something I can’t live without is fun, but I think I go just to shoot the shit with the local cycling peeps.  That makes it suck less than usual, since we all usually bitch and complain to each other about how much it sucks like usual.

So, I may find a once in a lifetime bargain one some bicycle part I don’t need, catch up with those folks that I see at every other event around, or just waste away part of my day walking around the Charlotte Motor Speedway.  I’ll finish off the day drinking beer and watching football, so it won’t be a total loss.  The weekend is gonna be busy, and it will keep me from sitting on my ass.

Hell, I may even get in some trailwork time too.  I haven’t been out digging in the dirt for a while anyway.