After suffering through shitty weather, short local rides, and urban adventures, I finally got a chance to get out of town to do something much more fun.  TomTom and I took off to the land of berms, better known as Warrior Creek. 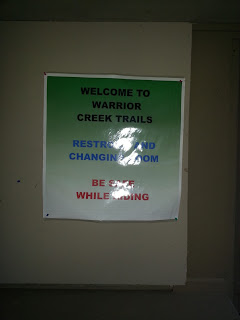 We were there for a fun ride, and oh what fun we had.  I noticed that some of the signs were still up from last year’s 6 Hours of Warrior Creek, so I stopped next to the one that was sponsored by Backcountry Research of course. 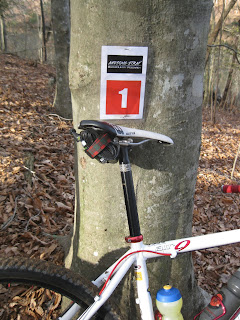 My Awesome Strap is so…awesome.

Anyway, we enjoyed the bermy goodness, fast downhills, and challenging climbs, but it was time to stop at the bar… 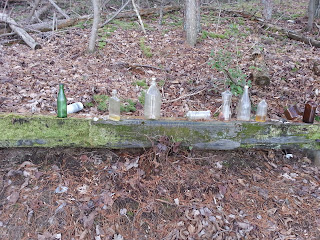 The bar is a trailside mainstay up there, but we noticed that quite a few bottles were missing and/or smashed.  We decided to look around the immediate area to replenish the booze, er empty bottles. 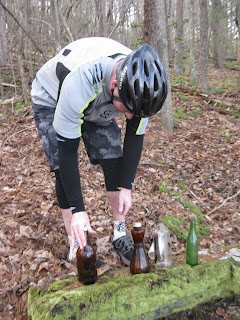 Of course we moved on, but on one of the fast descents/bermy sections, we had to slam on the brakes to avoid certain death. 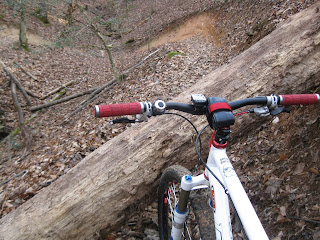 After narrowly busting our asses on the slippery trail (trying to get over that tree), we got on our way again and hit one of the most fun sections out there.  I sped up ahead and hopped off my bike just in time to capture a photo of TomTom riding one of the berms. 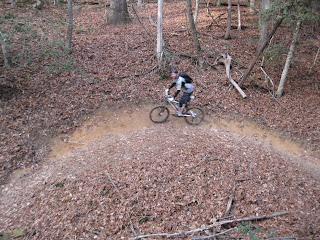 We were getting near the end, but we decided to take a detour on the new (to me) Headwaters Loop.  The sign at the entrance said it was a double black diamond, so we expected the worst.  It didn’t start off so bad.

It was just a little climbing with a few rocks thrown in. 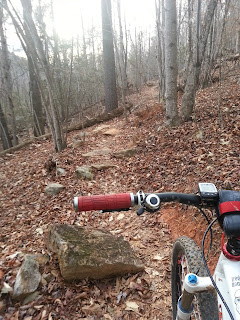 After the first climb, it started getting really fun.  We joked about how this wasn’t really a double black diamond loop.

Then the rocks got a little bigger. 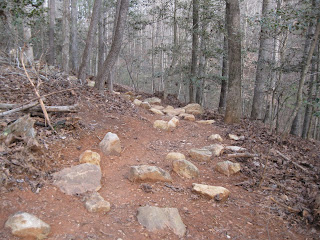 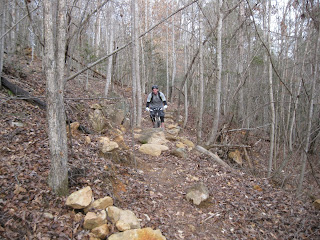 It was crazy rocky, and we navigated it pretty well.  We also learned how to keep our mouths shut until we finished an entire loop.  However, I didn’t learn that lesson until after I busted my ass pretty good.  I made it through one of the rougher sections, but stopped paying attention when I saw it was getting “easier.”  I got hung up on the tiniest of rocks, and fell over sideways on a couple of big rocks.  I landed right on my arm for the most part, and my leg took some of the fall too.  It didn’t do any real damage (other than a scratch and some swelling), but I’m still pretty sore and bruised all over.  It was fun though.

When we reached the end of the loop, we stopped for a minute to shoot the shit.  This girl came running by us on the trail, and she was moving along pretty fast.  Not too far behind, two guys on bikes came by.  They seemed to be hurting pretty bad, so we decided to let them get a pretty big head start before we got going again.  It didn’t take long to catch up to those two guys though, and they gladly pulled over to let us pass.  However, Runner Girl would be much more of a challenge.

We climbed a little more, and we just couldn’t seem to catch her.  Eventually the trail flattened out and we gained on her, so she pulled over to let us by.  I asked, “Are you running the whole loop?” to which she replied, “Yes.”

I yelled back to TomTom and told him that we had to put a gap on her, or else she would pass us on the climbs.  Just as sure as shit stinks we hit another climb, and she was right on our tail.  We pushed as hard as we could, and eventually we didn’t see her anymore.  When we got to the end of the trail, we were pleased with how the last mile flew by… 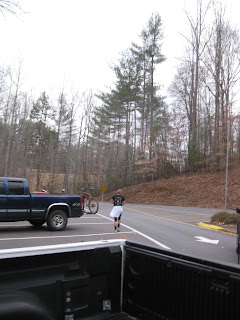 At least I got my reward when it was all over. 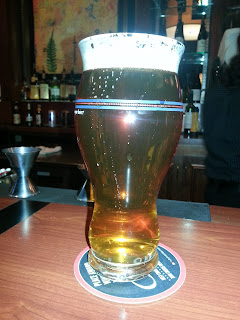