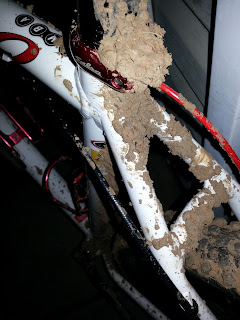 I’ll get into the weekend weather another time, but for now I’ll just tell you that it made the conditions “interesting” for yesterday’s Winter Short Track Race.  Being hung over and in shitty “race shape” was bad enough, but dealing with a slick trail made it that much more challenging. 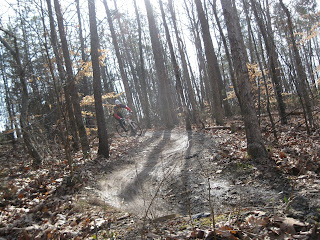 It took me about two full laps to get my lungs under control in the cold air, and by that time I had gotten used to the slipping and sliding. 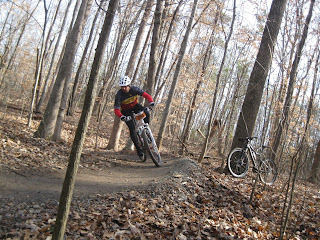 The dirt roadie factor was in full effect because of the soggy trail, so I pushed myself as hard as I could to make sure I wasn’t behind anyone in the woods.  By lap three I had lapped several riders in the class that went out before me, and I was feeling pretty strong. 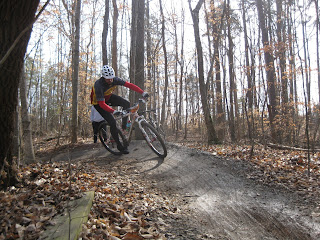 Every time I got out on the fire road, I could see the leaders up ahead.  The pace was a bit slower than the two previous races, but I didn’t get a break at all.  I was able to keep up because I can handle my bike pretty well, but near the end of the race my legs were feeling like they had been used and abused. 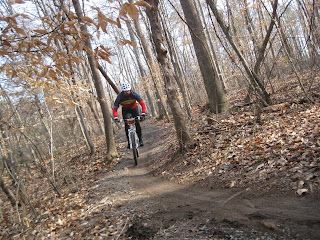 I rode quite a bit earlier in the week, but then I got a massage and didn’t do a damn thing leading up to the race.  I thought it would do some good, but instead it made me suffer quite a bit more.  With one lap to go, I was happy to be near the end. 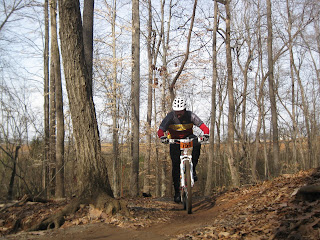 I crossed the finish line in 10th place, which wasn’t really great.  I did finish on the same lap as the leaders though.  I’m making progress towards my goal of getting into prime “racing shape”, but progress is hurting pretty fucking bad right now.  Since I don’t really train, this small amount of suffering will have to do.

There would be more suffering that day, which means if you come back here tomorrow you get to suffer right along with me.