I Do Dumb Stuff Sometimes 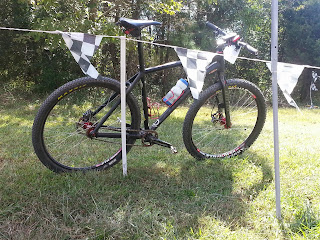 Like racing when I probably shouldn't. I headed out for lap three, full of confidence and knowing that I would catch up to Good Guy Greg. My legs felt really strong, and my bike handling had returned to somewhat normal. I'd even forgot that my shoulder hurt...


until I did something stupid.


Somewhere in the middle of the lap, I was hauling ass on a downhill with my crabon fork bouncing off every single root and rock on the trail. I was running ridiculously high pressure because I was afraid of burping the tire like I did in Minnesota, and it was starting to wear on me. I flew around a corner too fast and clipped a tree with my shoulder, aggravating my previous injury. I stopped for a minute and assessed the situation.


Except that I wasn't.

My shoulder started to swell a little bit, and coupled with too much air pressure (and a rigid fork) my right arm started going a little numb. I tried not to let it bother me, but the pain was starting to take over. It affected me the most when I had to stand up to climb, which was most of the time.


Plus, there was another issue. My bike was creaking like crazy and it felt a little loose in the front end. I wasn't sure what it was, and like you should do for any other problem I ignored it and hoped it would go away. I finally made it through that lap, and once again I rolled through the pit area without stopping. I wasn't about to lose any more ground.


I had plenty of water and food, and my legs were still as fresh as they were when I started. Lap four had begun, and at my current pace I was on schedule to complete six before time was up. I powered up the climbs trying to ignore the increasing pain in my shoulder, but my bike handing demons had returned. Fearful of crashing and concentrating on that horrible sound coming from the front end, I once again found myself taking it easy on the descents. It was deja vu all over again.

Somewhere in the middle of that lap, I was climbing up a hill when my shoulder really started to hurt. I couldn't pull up on the handlebars with any force on one side but I tried anyway. About halfway up I had to get off my bike. I grabbed a tree to try stretching it out to see if that would help. Just then, the MadSS came barreling by on a big, geared squishy bike. He asked if I was okay, and I said something that I can't remember right now. Big Crom rolled up moments later, and he actually stopped to see if I was okay. He said he was hurting pretty bad and he took a few moments to hang out with me. Eventually he got back on the bike.

Just before I headed back out I checked to see what was making that creaking noise and found that my headset had worked itself loose. Shit.


With about five miles to go, I babied my bike and my shoulder with the plan to address both in the pit area. I finally made it through the start/finish line and grabbed some tools to get to work. 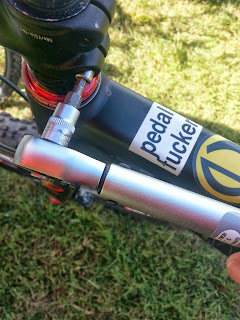 It took me forever to get it right for some reason, and once I did I decided to sit down for a minute to see if the pain would go away. I popped a couple of ibuprofen and after sitting there for a few minutes I realized that I probably shouldn't continue. I didn't want to stop, but I kept hearing Lunchbox's voice in my head:


“Don't mess yourself up even worse out there.”


So just like that, I took the walk of shame up to the scoring table and pulled the plug on my race. Even though you can't really DNF a race like that, I felt like shit for calling it quits. I guess I did the right thing, but I decided to drown my sorrows anyway. 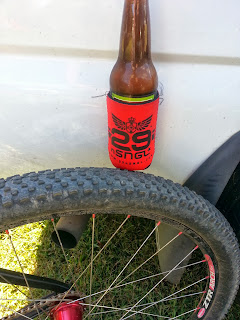 I hung out for a while taking it easy, and as the race came to a close I waited at the start/finish line for Good Guy Greg to finish. He was hurting, but finished the day with six laps. 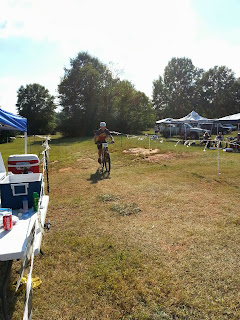 I gave him a beer handup as he crossed the line. He earned that shit. I finished fifth that day, and I felt pretty shitty for even trying to get out there in the first place. This race was part of a three race series though, and when it as all said and done I found out that I was tied for third overall. However, since I bowed out early that meant Good Guy Greg got the tiebreaker.


So I had to settle for fourth overall. 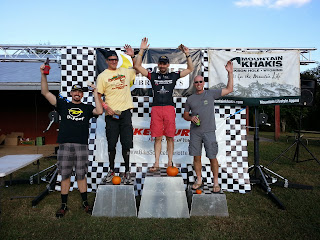 
I got a pretty good prize out of it, and after a few beers my shoulder pain didn't bother me anymore. I figured that after six weeks I would be good to go but that wasn't the case. I'll give it two more weeks, because I have another race to attend. 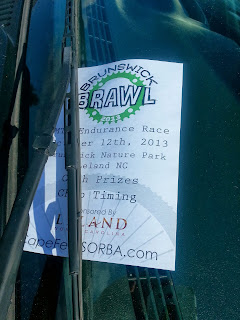 Email ThisBlogThis!Share to TwitterShare to FacebookShare to Pinterest
Labels: Endurance racing, Grind On The Greenway, suffering