I finally got back to the social ride scene last night. Since it was a late night as usual, I don't feel like getting my shit together to talk about it. Maybe tomorrow. Since I just “raced” last weekend, I'm still feeling the effects of it. Or maybe it was my week in Vegas plus the shitty and abnormally long work week when I got back. Whatever, I'm tired.


Sunday morning when I woke up, I didn't want to get out of bed. I got plenty of sleep, but with no plans so early in the morning I didn't see the need to remove myself from underneath the covers other than to empty my bladder. I wanted a nice, easy day. Little Miss Sunshine had a different idea though.


“Let's ride our bikes to get some coffee!” she said, all full of piss and vinegar.


I mumbled something, but she insisted.

All of a sudden, she started hooking wires up to me with these little pads on the ends. I thought I was in for some kind of shock treatment as punishment for not wanting to get out of bed. 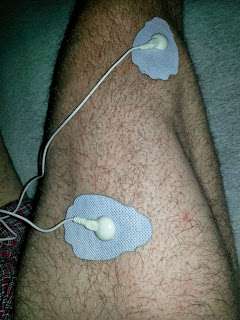 
Turns out it was an electronic “massager”, but I thought I was gonna get electrocuted. I didn't fight it though, and it was actually pretty cool. It sends electronic pulses to the muscles, which in turn makes them contract and relax. And you know what? That shit worked. Everywhere I hurt, the pain was gone in minutes. After a little while I was ready to go, so we rode up to the local Starbucks. 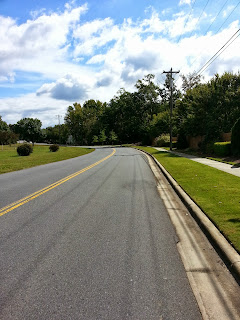 I was still slower than shit though. Maybe I was just sleepy.


It's a short ride, maybe only a mile and a half. We got there and I ordered some weird-looking pumpkin coffee thingy. I was afraid to drink it. 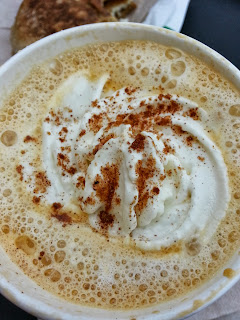 The little lady was happy that I was there, at least. 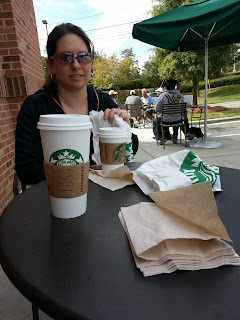 It was nice to get out and spin my legs I guess, but I was getting paranoid. There was an unidentified military plane that kept circling overhead and it made me nervous. 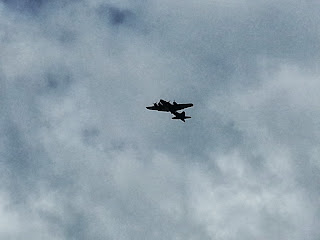 We got the hell out of there.

And I'm getting the hell out of here. I've already said too much. If anyone asks, I have no idea where we got that high tech “massage” equipment.


I think I see that plane again.

The Tins unit is awesome and so is "Little Miss Sunshine" for hooking you up!

BTW we saw about 4 or 5 of those planes flying over Fisher around 10-11 am on Sunday, too. Cool looking WWII planes. :)