The Wait Was Over

I wasn’t too worried about my kid being out there a little longer than anticipated, since we had a Trail Fairy to keep an eye on everyone. 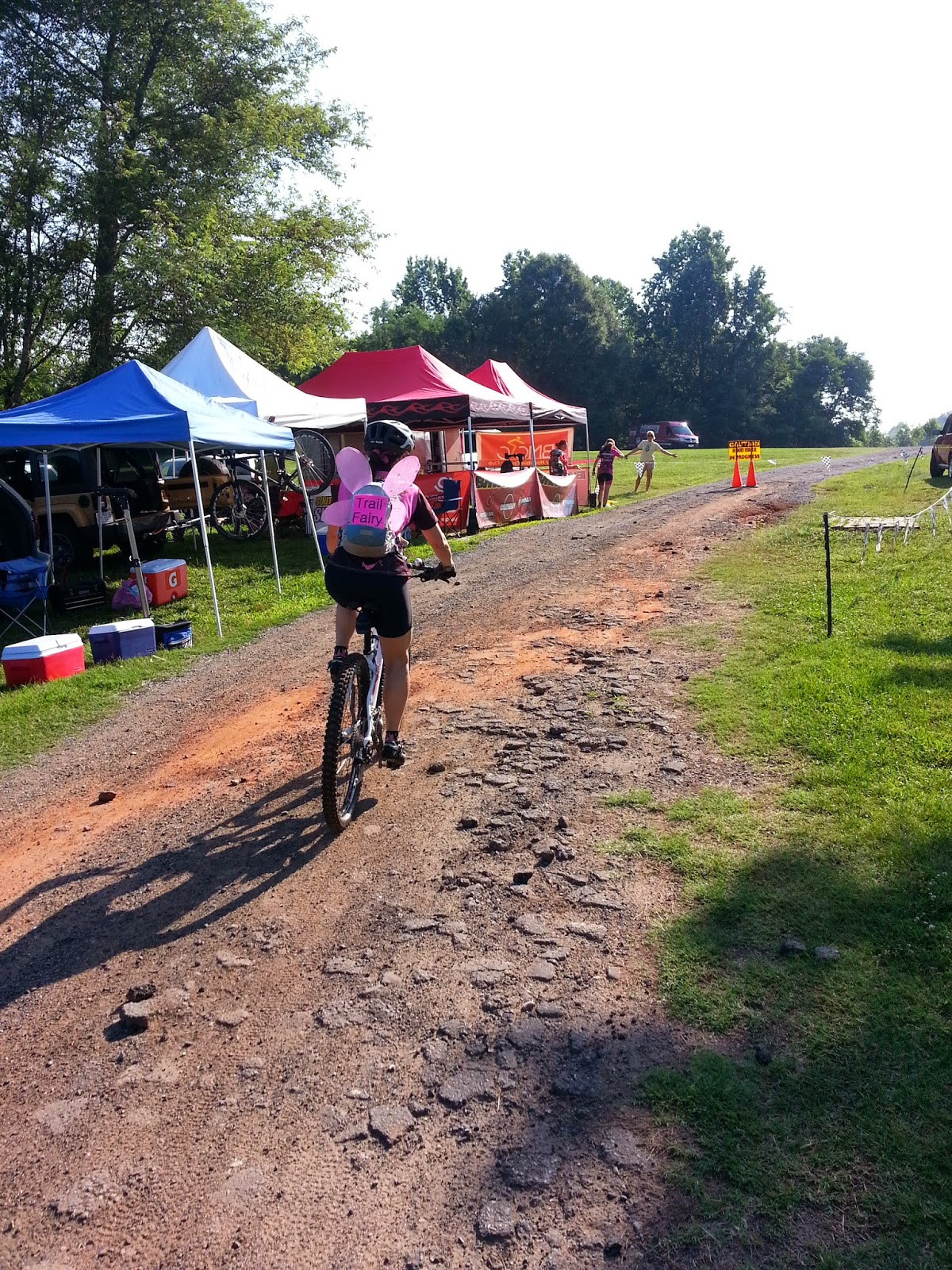 Lunchbox finally came back from his second lap.  After an hour and a half, he was suffering pretty bad.  It was really hot out there, and I think he may have been a little dehydrated.  I told him to drink plenty of fluids, and to make sure that he ate.  I strapped on the timing chip and took off on my lap, determined to keep the same pace as before.

Meanwhile, TomTom had showed up to hang out.  He told me that after I left, Lunchbox grabbed a sub from the cooler and looked at it.  He wanted to find a way to get it in his belly without actually having to eat it.  Eventually he did, which was uh, strange.  Sure, I told him to eat, but I didn’t mean eat a giant sandwich.  I guess there’s a reason he’s called Lunchbox.

My second lap was good.  I kept up my fast pace with my little spinny gear, and for some reason felt no ill effects from sitting on my ass for an hour and a half.  Every once in a while I would find myself slowing down though, probably because I thought I needed to slow down to “endurance pace” to survive.  I would have to remind myself that I get a break after every lap and immediately speed up.  That lap was mostly uneventful, other than the kamikaze squirrels that were jumping off the trees in front of me.  One of them jumped right across my front wheel, my tire barely skimming his tail.  Any closer and it would have sucked for us both.  Later on another one did the same thing, this time with a little more clearance but with a much more hilarious result.

He jumped off the tree, crossed in front of me, and splashed into the river below.  I got a good chuckle out of that.

Before I knew it, I was back on the gravel road heading for the start/finish line.  I knew Lunchbox was tired, and with me rolling in at fifty four minutes he didn’t get much of a break.  When I saw him he looked like he felt better, so I gave him the timing chip and watched as he took off.

I think maybe the beer (root kind of course) helped him a little. 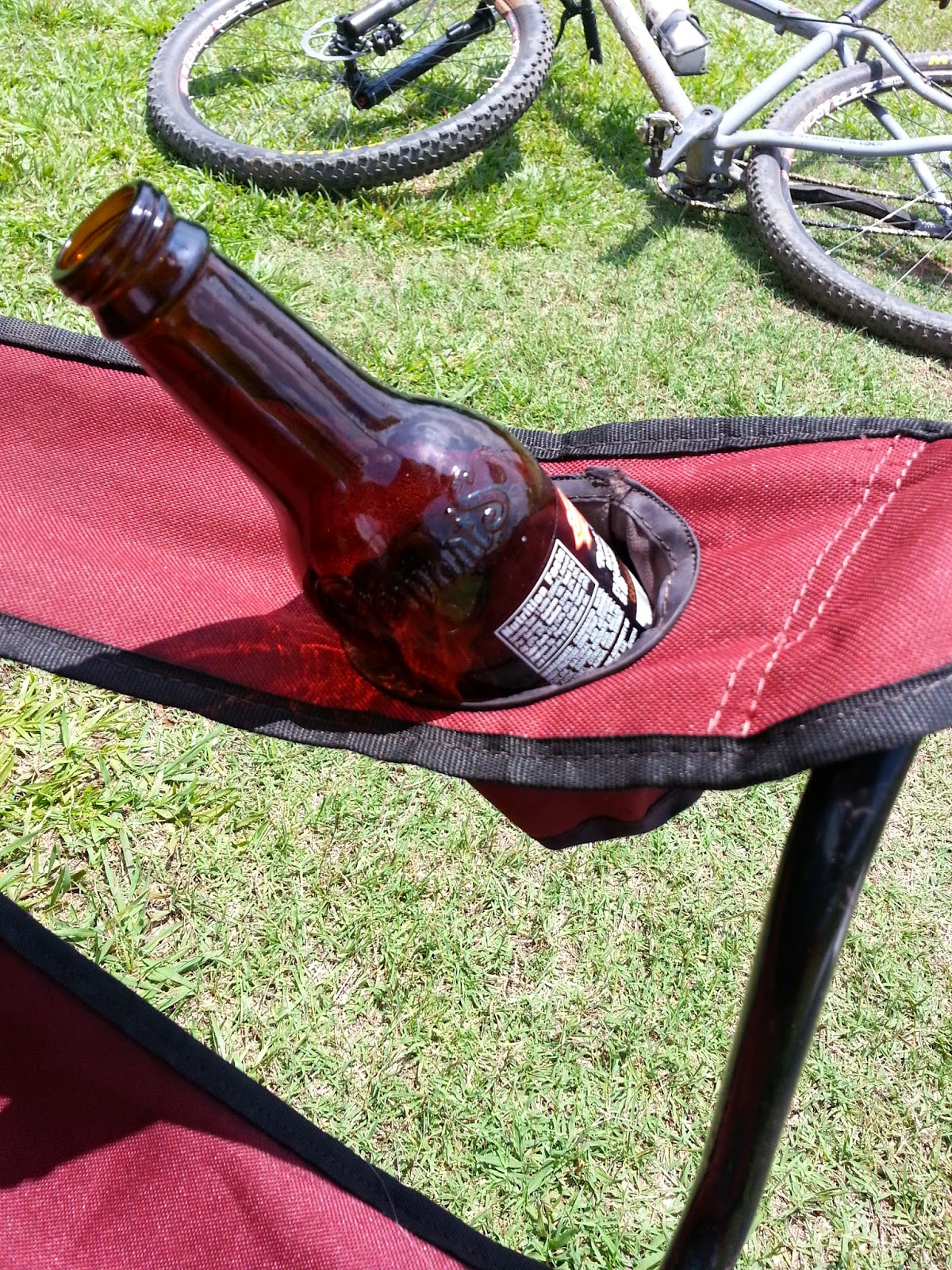 When I heard the story I just told you (the one about the sandwich), I figured that he’d be hurling over the side of a bridge in a few minutes.  I sure as shit couldn’t eat that much and ride my bike right away.  I worried a little more this time, but I knew he’s tough and wouldn’t give up.  I started to think that maybe our team had done its last lap for the day, even though there was plenty of time left.  I hung around under the tent, walked around, and did other things to keep myself busy while he was gone.

An hour and forty minutes later, he came flying up the hill.  He looked like he was tired, but satisfied that he put in a good effort.  I was proud.  I also had to go back out since we still had two hours left.  I took off, yelling back that he can take it easy now and I’ll see him in about an hour. The plan was to take it a little slower this go round, but after a few minutes I just couldn’t do it.  I started spinning like crazy again, feeling good that I hadn’t really been working all that hard.

I was pretty much on autopilot for my third lap.  The trail didn’t look familiar at all, even though I’d been on his many times before.  I passed a few people here and there, and only one person passed me.  I made it to the final section along the river, and quickly pushed the notion out of my mind that I should take a swim.  That section is actually pretty fun and I was smiling the whole time.  I had a close call though when I came around a corner too fast to find someone standing in the middle of the trail.

I narrowly avoided a collision, and while I celebrated my hands somehow found themselves detached from the bars.  My body lunged forward and I took a stem to the gut.  Ouch.  I didn’t crash for some reason and managed to get my hands back on the grips where they belonged.  Whew.  Close call.

I came out on the gravel road and made a big push up the final climb.  As I came around toward the start/finish line, I saw my kid sitting down, relaxing.  I yelled out, “C’mon, it’s your turn.”

He wasn’t having it.  I came back a little slower this time (fifty six minutes), but with over an hour left in the race he actually did have time to go back out.  I sure as shit didn’t want to go right back out, so we called it a day.  Three laps each, suffering, laughter, big-ass sandwiches, near-miss almost crashes, and a whole lot of fun.  Father-son bonding at its finest.  I was proud of the big fella for pushing himself out there.  We wound up in sixth place (out of six, but who cares.)  Sure, I could’ve been on the podium had I raced in the SS class, but the feeling of teaming up with my son was way better than that.

We were nowhere near the podium in the duo class, but I still felt like I won.  Hell, we won.  Who gives a shit about a trophy anyway.  Memories like this will last a helluva lot longer than some piece of hardware.
Posted by TheMutt at 7:46 AM