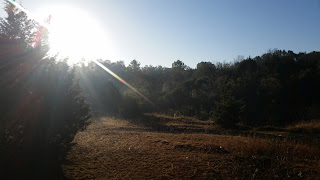 When the sun came up, the whole field in The Vortex area at Santos starting slowly waking up.  No doubt there were lots of hangovers from the parties the night before, but I felt fine.  I was ready to go, but not sure what we were doing.  Although Mr. Shepherd and I had signed up for the 12 Hour Duo Class, we really only wanted to race for six and hang out the rest of the time.  We discussed it a little bit, and that was our decision.  However, we both new how competitive we could be, and thought maybe we’d end up going for the full twelve.

Who gives a shit.  I was ready for whatever. 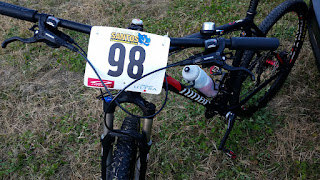 Leaving the worries if what kind of race we’d do behind, I got dressed.  I selected special DeFeet socks for the day.  You know, the ones that Lunchbox designed. 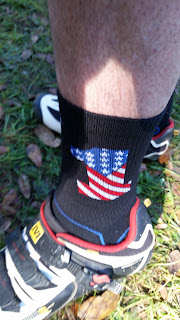 We rode over to the start/finish line to the pre race meeting.  It was decided that Mr. Shepherd would do the first lap, including the LeMans start (running up the hill and around the corner to where the bikes were staged.)  I waited for the race to start so I could cheer him on.  Moments later, people started running by in a big blur.  I somehow managed to capture my partner as he sprinted by. 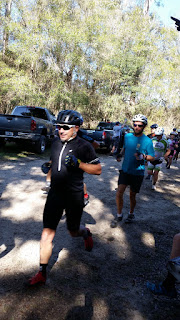 He’s primarily a triathlete these days, so the running was easy.

Shortly after that, bikes started whizzing by.  Once again, I was able to get a photo of Mr. Shepherd as he came by, looking pretty damn excited to be racing a mountain bike. 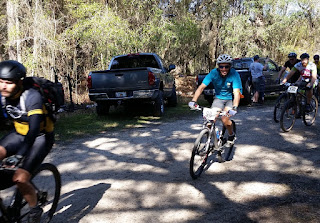 It was an abbreviated lap, but I knew it would take a while due to trail congestion.  I hit the bathroom one last time, filled up my water bottle, and waited for my partner to come back.  As the racers started rolling through the start/finish line, I kept my eye out for him.  Somewhere in the middle of the pack, he came around the corner and it was my turn.

The exchange was quick, and before I knew it I was in the race.  I took off quick and my heart rate shot through the roof.  I felt that my rear tire pressure was much lower than I like, and despite the fact that I rolled by my pit just after I noticed, I decided to wait.  I kept pushing, knowing that I would get a break after my lap anyway.  Despite my preseason fitness level, low air pressure, and rusty bike handling skills, I rode surprisingly well.  The short, punchy climbs were tackled with ease, and I was confident in my technical ability.  Hell, I even passed a guy on an uphill skinny while he was climbing on the go-around.  I was the climbing master or some shit like that. 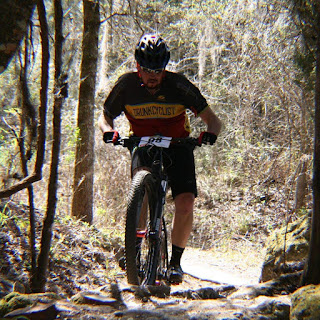 And I was feeling pretty damn good.

Once we got to the flat stuff, I went even faster.  Having a geared bike for the first time down there meant that I could fly through the trail, and I did.  I was passing a lot of other racers on the twisty flat section while my confidence grew.  I got behind one guy and he offered to let me pass.

“Ha ha.  I’ve already gotten my crash out of the way.”

Once the trail opened up, I flew by him and tried to put a big gap between us.  The trail got really tight again, and as I rounded a corner my rear wheel slid out.  I leaned forward to counteract the slide, and somehow caught my pedal on a root.  It sent me sailing over the bars sideways as me and the bike crashed to the ground in one swift motion.

I laughed it off as the guy I previously mentioned rolled by.  But, it hurt.  I got back on the bike, and after a few minutes of slow pedaling (and feeling wonky) I picked up the pace again.  Eventually I rolled through the start/finish (with a decent lap time despite my crash.)

The next exchange was quick too.  I briefly mentioned to Mr. Shepherd that I’d crashed but I was okay, and otherwise I felt good.  He took off, and I went back to the pit to eat and drink (and air up my tire to the proper pressure.)  I never sat down, instead walking around to keep my legs loose.  I went right back to the start/finish line to get ready for my next lap.  Right on time, Mr. Shepherd came rolling through again.  He looked a little worn out this time, but we exchanged the baton quickly again and I went back out.  Instead of wondering how he felt, I concentrated on not crashing again.

Especially on some of the newer features out there, like the “Banana Hammock.” 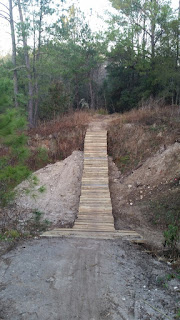 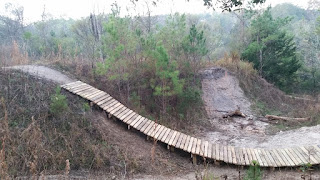 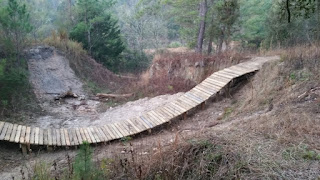 Florida singletrack is fun, but they take it up a notch at Santos.  While a lot of the area is kinda flat, there are some rocks and climbs as well. 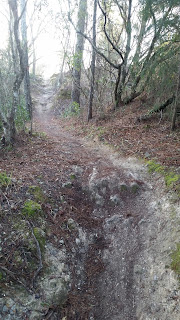 Anyway, my second lap was pretty uneventful.  I had plenty of energy, speed, and skill, and so far I wasn’t feeling any ill effects from my crash.  At one point I passed a couple of riders, and one guy shouted out...

It made me feel good, but I knew I would eventually fizzle out.

After a sorta speedy lap, I rolled through the transition area and saw Mr. Shepherd.  After yet another quick exchange, he took off.  We were doing well so far, but when he left I wondered if we were really gonna try for twelve hours.  I went over to our pit to eat and drink again, but this time sat down to rest my legs.  I was feeling good still, but if we were gonna ride into the night I wanted to make sure I’d last.  My break went by fast, and I rolled back over to wait for my partner again.  He came rolling through, but I could tell that he was wearing down.

We took a little longer for the exchange this time.  He wasn’t sure about doing another lap, so we decided that we’d play it by ear.  I told him to just meet me back there at the usual time and we’ll see how it goes.  He agreed, and I took off.

I still wasn’t really tired.  However, my brain was fuzzy.  I had trouble on some of the technical stuff (that I’d previously cleared), and once in a while on the flat sections I would just space out.  I would start thinking about having a beer or some pizza and speed up again.  This continued for the rest of the lap, but I was determined to keep going.

Even if we decided to go for twelve hours.

I rolled through the start/finish and Mr. Shepherd was nowhere in sight.  I looked around for him for a bit, and decided to roll back to the pit area to see what was up.  I wanted to go back out, but when I got to our tent I saw his bike, and eventually him.

We were done, and I was okay with that.  Six laps in five hours and twenty minutes.  A good pace if we’d hung on for twelve I guess, but we weren’t there to get on the podium or any other shit like that.  We both had crashed out there, and I even found out that Mr. Shepherd had lost the sole of his shoes again. 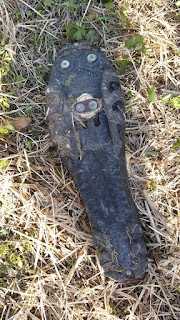 With plenty of daylight left, it was time to eat.  My partner went out to pick up some food for us, which meant that I actually got my pizza. 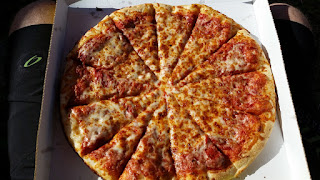 Lot of beer was consumed too, which was a warm up to the after race party happening right next door.  The Jacksonville crew had it going on, and after racing my ass off, that’s where I wanted to be.

You know, dragging it out and all that.