The 12 Hours of Santos.  It's an endurance race.  For mountain bicycles.  Duh. 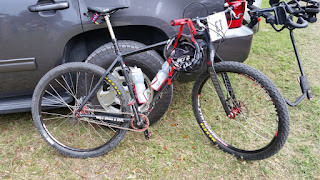 I think it's a little more than that though.  An event in Florida in February is the most appealing part, especially since it's usually pretty damn cold here in North Carolina during that time.  This year was an exception as far as the cold goes, but I wasn't about to miss out.  It's like my own mini vacation so to speak, and aside from a race it's also a pretty damn good party.

Oh yeah, the party.  Since I was almost ded from insect attack, I just sat around at the party spot like a slug.  I took photos of people riding the Flaming Kicker of Death though. 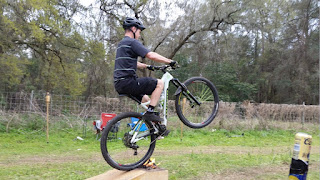 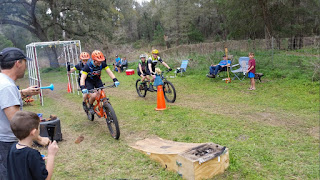 For the record, the tandem people skipped it.  I would have two on a contraption like that.

I heckled a little, but mostly I just hing around and enjoyed everyone else's antics. 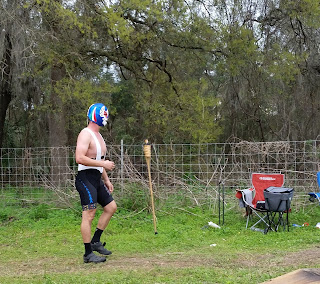 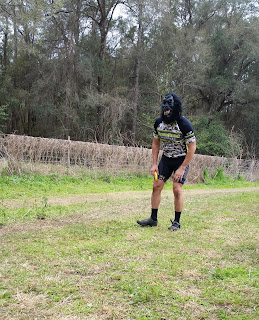 And watched Joe work on his Wizard Staff and get happy time from the Doll of Judgment: 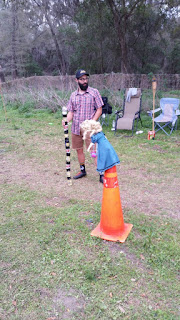 As the sun began to set, I started feeling good enough to drink a beer.  I enjoyed a Jacksonville beer while I hung out with the Jacksonville crew. 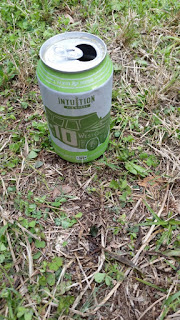 I drank a little but not too much.  I know, right?  Who gives a shit.  I felt good enough to heckle, which meant cheering like crazy for the people that hit the jump.  The sky was getting darker and the flame was getting higher... 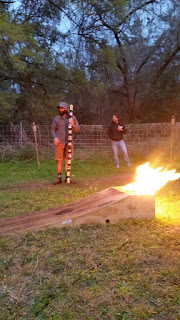 Sure, the racing/flaming jump was entertaining, but this shit made my day: 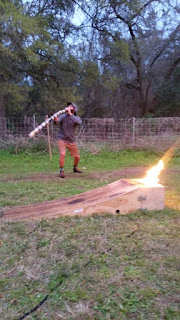 And when it got really dark I took my favorite photo of the night: 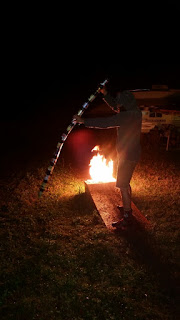 It got up to sixteen cans before it collapsed under its own weight (the staff, not Joe.)  That was impressive AF.   The staff may have died, but the party continued on... 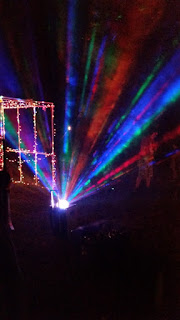 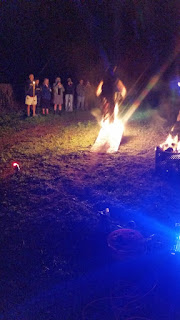 The party continued well into the night.  I didn't though, because I still wasn't feeling so great.  I quietly bowed out and took off for the night, but I was happy about the good time I had.  The 12 Hours of Santos isn't just a race.  It's a "thing."  Sure, people go down there all serious and in it to win it and there is nothing wrong with that at all.  In fact some of those people party the hardest.  But it's the whole experience that makes this a great event.

Good people, good weather, and good times.  I can't wait for next year.